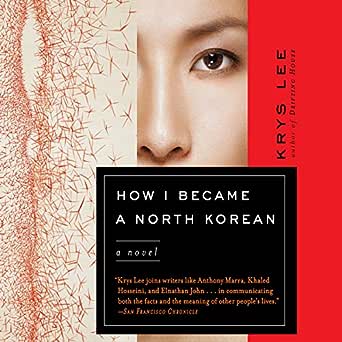 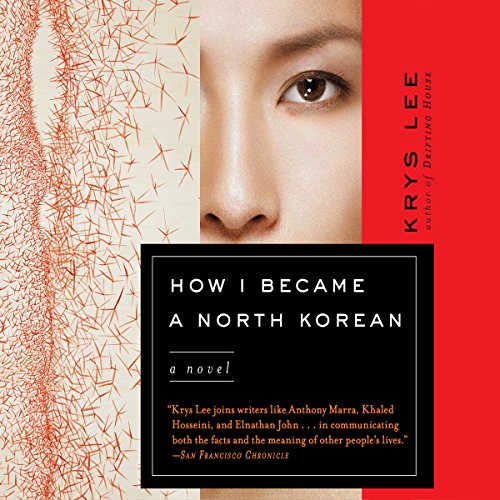 How I Became a North Korean: A Novel

List Price: $34.99
You Save: $4.37 (12%)
By completing your purchase, you agree to Audible’s Conditions Of Use
Sold and delivered by Audible, an Amazon company

3.9 out of 5 stars
3.9 out of 5
45 global ratings
How are ratings calculated?
To calculate the overall star rating and percentage breakdown by star, we don’t use a simple average. Instead, our system considers things like how recent a review is and if the reviewer bought the item on Amazon. It also analyzes reviews to verify trustworthiness.
Top reviews

LongT
5.0 out of 5 stars Engrossing look into a world that few Westerners see, ...
Reviewed in the United States on October 7, 2016
Verified Purchase
Engrossing look into a world that few Westerners see, that of the plight of North Korean refugees in northeast China. At times tough to read, it is a tale of exploitation, suffering, and survival in a harsh world through the eyes of three young and fascinating characters. Ms. Lee is passionate about the subject matter and it shows in her sparse, but poetic and crystal clear writing. If you are interested in the affairs of the Korean peninsula, you will find this book well worth your time.
Read more
3 people found this helpful
Helpful
Report abuse

Ned C. Holt
4.0 out of 5 stars Good novel about the desperate lives of refugees
Reviewed in the United States on January 9, 2018
Verified Purchase
A well thought out concept and story. Really gets into the seamier and frightening aspects of being a refugee from Nort Korea in China. It could have used a glossary for the Korean language words. I know a good of Korean, but the North Korean terms are s challenge. Still, I’d highly recommend this book to anyone interested in learning about the lives and fates of North Koreans in China.
Read more
One person found this helpful
Helpful
Report abuse

NEEL SAPRE
2.0 out of 5 stars Worth a read but nothing for Korea watchers
Reviewed in the United States on September 25, 2018
Verified Purchase
Nothing special. Story wasn't very believable. Author tried too hard to infuse elements of social dynamics in the Dprk along with a lord of the flies like survival story.
Bitter truth is that all the non fiction books written about North Korea seem totally made up. Any real fiction work will find it hard to live up to those.

Timothy D Browne, MD
5.0 out of 5 stars Hard to put down!
Reviewed in the United States on January 30, 2017
Verified Purchase
How I Became a North Korean is a beautifully written story. It is haunting, sad and powerful and a must read to understand the plight of those desperately escaping North Korea. Ms. Lee writes eloquently and has wonderfully developed characters. I felt as though I was sitting within her story. Well Done!!
Read more
One person found this helpful
Helpful
Report abuse

Ralph Blumenau
4.0 out of 5 stars From the frying pan into the fire
Reviewed in the United Kingdom on September 21, 2016
Verified Purchase
This is a story, told in alternating autobiographical chapters, by three young Koreans who in 2009 found themselves in China:

Yong Ju is the son of a father who was part of the North Korean establishment until Kim Jong-il took against him and shot him dead during a dinner. Yong Ju, then 21, his mother and sister were then able, with the help of a friend, to escape across the Tumen River into China, only to find gangsters on the Chinese side abducting the mother and the sister, leaving Yong Ju to find shelter in a cave in the mountains.

Jangmi has become pregnant and, in desperation, had arranged via broker to marry an old crippled Chinese man and had bribed the border guards to let her cross the river. When the husband and his mother find out that she is pregnant, she is driven out of the house and eventually also finds shelter in the cave.

Daehan (Danny) and his parents had emigrated from a Korean area in China to the United States. They are a Christian family, and his mother had gone back to China to become a missionary. Danny, aged sixteen, is such an unhappy misfit at school that his father arranged for him to rejoin the mother in China. When he gets there, he finds that his mother is having an affaire with a Chinese deacon, and he is so horrified that he runs away, and, after horrific adventures, also ends up in the cave.

Danny thinks the Church will look after them, and he and Yong Ju, together with several other young North Korean refuges, do find accommodation in a safe house run by a Chinese missionary, Mr Kwon. Jangmi had run away from the cave and had some terrible experiences before she, too, is rescued by Mr Kwong, so the three are reunited. Mr Kwon had said that he could get them from the safe house to South Korea – but will not let them go, ostensibly until they have mastered the whole of the Bible, but actually he has ulterior motives.

It is not surprising that people try to flee from the oppressive regime in North Korea (there are several references to the terrible famine between 1994 and 1998); but the novel shows all the dangers to which North Koreans are exposed in China. If found, they may be sent back to North Korea. Most Chinese dislike the Koreans intensely, refuse to help the refugees. Thugs and gangsters will rob them, exploit and mistreat them, or sell them into prostitution. Even the safe house is in effect a prison run by a hypocritical tyrant. The bleakness and horror of their lives pervades most of the book.

The short last section, set six years later, is called “Freedom”, so I am not giving a spoiler when I say that they eventually escape and get out of China.

Apart from being a painful read, it is not an easy one: there are many untranslated Korean words, the meaning of only some of which one can guess; in places the triple narrative is quite confusing and there seem to be some gaps in their collective story. The title seems odd to me also: the characters were North Korean already; one of them had become an American, the other two became South Koreans.

dazey
5.0 out of 5 stars great and poetic an unsentimental
Reviewed in the United Kingdom on September 6, 2016
Verified Purchase
This is a fantastically well written book, with clear story lines and almost immediately an atmosphere that permeates the whole journey. But who would want to be a North Korean refugee? It's a whole world of suffering I didn't know about.
Read more
Report abuse

pari savvidi
5.0 out of 5 stars all great
Reviewed in the United Kingdom on September 3, 2020
Verified Purchase
great at anything
Read more
Report abuse

Silkdream
2.0 out of 5 stars Too much fiction
Reviewed in Germany on June 19, 2020
Verified Purchase
The reality, even from different points of view, is not reflected. Just too much fiction with a title, that tries to attract readers. However, to analyse such intentions, you can use the book.
Read more
Report abuse