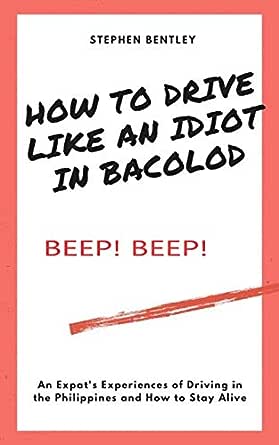 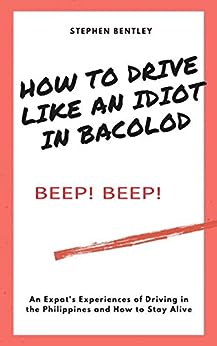 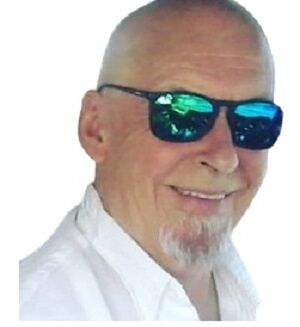 How To Drive Like An Idiot In Bacolod: An Expat's Experiences of Driving in the Philippines and How to Survive Kindle Edition

G
5.0 out of 5 stars Buy This Book To Save Your Life - Seriously, I'm not joking, if you want to survive in the Philippines
Reviewed in the United States on March 13, 2016
Verified Purchase
I have lived in the Philippines for almost two years. I've been to Davao, Cagayan de Oro, Manila, Cebu, Bacolod and Valencia City. Steve's book '
How To Drive Like An Idiot In Bacolod' covers about 98% of the Philippines. Steve paints the picture exactly how it is. If you plan on coming to the Philippines buy this book as your guide to driving. Pleased, also heed his warning about driving at night - very dnagerous. My wife and I have a car, but I do not drive, she does - and I have given up attempting to teach her the 'proper way' to drive.

He is also correct about the wonderful people here. The smiles are wonderful, in fact infectious :-) The Filipinos are wonderful to be with - I should know I fell in love with the most wonderful Filipina. Come to the Philippines and enjoy some of the best people on the Earth. You won't be disappointed - but don't drive yourself :-)

Amazon Customer
5.0 out of 5 stars Ashley Pullen
Reviewed in the United States on September 3, 2016
Verified Purchase
Even though I live in the USA I can relate to this book. actually everyone can world wide It is funny as can be and truthful as well. I would highly recommend it .
Read more
One person found this helpful
Helpful
Report abuse

Thomas
4.0 out of 5 stars I blame the government for the traffic chaos and bad drivers in the Philippines
Reviewed in the United States on January 21, 2018
I've been living and driving in the Philippines for over 4 years now. Most of my driving was in the Cavite and Laguna provinces, but also other areas in Luzon. I've been to 40 other countries in my life and haven't seen such bad traffic and driving anywhere else with the exception of India perhaps. But most of the blame has to fall on the government for two main reasons:
Firstly, the infrastructure is insufficient and outdated. Most of the streets were built decades ago before the recent explosion of the Filipino population of people and vehicles occurred. There are not enough roads in the country, especially not enough freeways. The roads that do exist often only have one lane each which doesn't work due to the nature of slow tricycles and jeepnies being everywhere and slowing everyone else down. To make matters worse, streets in the Philippines have no sidewalks. So you will often find kids playing on the side of the road as playgrounds also don't exist in the Philippines. Watch out, if you hit a kid due to the kid running onto the street, it's your fault, not the parent's fault!!!). Parking spots are also a rarity so often you have tricycles parking on the side of the road, blocking about half of the lane that you're supposed to drive in. Unfortunately, there is no way to fix this mess as the houses are too close to the road. So there is no way to have needed road widening projects to allow for 2 lanes in each direction plus needed sidewalks and parking spots. Thus, even if people learned how to drive properly, traffic would still be very slow at best. The second thing I blame the government for is that no proper traffic education has ever been provided. Nor is it required for an aspiring driver in the Philippines to take any driving lessons or pass any real tests. In the absence of this, bad driving habits are passed on from one generation to the next. To put it simply, people simply don't know any different and think the way people drive in the Philippines is normal and/or part of life. When you do take Filipinos out of this chaos in their country and force them to learn how to drive properly in other countries, they adapt just fine. Btw, the 20 tips you mention in your book are great. I would like to add two more: 21) Stay in your lane. It's not cool for anyone to take up two lanes! 22) On freeways like SLEX the left lane is not meant for people to go 70 km/h and be slower than the drivers in other lanes. When people do this, it creates a traffic danger because those who want to go faster have to pass on the right lanes. Again, the government needs to step in and guide drivers properly. For example, in a 4 lane freeway, the right lane could have a speed limit of 70 km/h, the 2nd to right 80 km/hr, the second to left 90 km/hr and the left one 100 km/hr. This way everyone would know where they belong and feel comfortable, and then people wouldn't have to change lanes all the time.
I hope Filipinos will be humble enough to take some of the good from other countries and not change their way of living. Driving in LA is definitely a lot more stressful and dangerous than driving in the Philippines where at least people drive slowly. No one is proposing to introduce a rat race lifestyle to the Philippines.
Read more
One person found this helpful
Helpful
Report abuse

Liz
5.0 out of 5 stars An eye-opening look at the way Filipinos drive, from a foreigner's perspective
Reviewed in the United States on April 26, 2016
I honestly didn't appreciate the title because Filipinos aren't idiots. We just drive a certain way because if we didn't, we'd never get anywhere on time. Or at all. We just have a gung-ho attitude about getting someplace, though we also have a laissez-faire attitude about it as well.

At the same time, I can't fault the author. From an outsider's point of view, it's crazy out there on the streets of Bacolod or any big city in the Philippines. If you're visiting from a country where everyone follows the rules on the road, then you're better off having a driver take you around the city. You're probably better off closing your eyes, too, as your driver runs a red light because he says it's clear.

Still, it was refreshing to read Bentley's apparent shock that there are no rules when it comes to driving in the Philippines, just as there are hardly any road markings visible to the naked eye, o​r that even though there may be signs that say "Keep Right," no one keeps right.

I appreciated the pictures he included, as well as links to videos that show the reader what he's talking about. His love for the country and its people is evident, and I appreciated that as well. Filipinos' driving habits may stump many a foreign visitor like him, but this book shows that their hospitality and resilience amidst everything else is one reason he still calls it home.

I received this book from the author in return for an honest review.
Read more
One person found this helpful
Helpful
Report abuse
See all reviews

Tony B.
5.0 out of 5 stars Spookily accurate with lots of good old British humour.
Reviewed in the United Kingdom on August 14, 2016
Verified Purchase
A five star rating for a few reasons, firstly I read the book in two sittings - a good barometer to how readable a book is. Secondly and I say this as someone living in Bacolod - I recognise everything the author says about the driving here. Thirdly - the humour leaps out of the page at you and the reader can feel how the frustrations of driving here are dealt with a resigned humour. Lots of info' about Bacolod and Negros island that will be of great value to anyone thinking of visiting here or even someone like me wanting to explore more of the area where I now live. The casual reader will also find it entertaining and I have no hesitation in recommending "How to drive like an idiot in Bacolod".
Read more
One person found this helpful
Report abuse
See all reviews