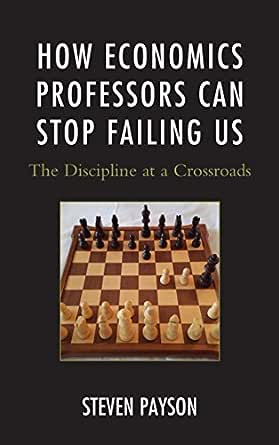 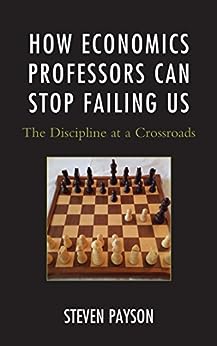 How Economics Professors Can Stop Failing Us: The Discipline at a Crossroads Kindle Edition

Steven Payson has been a consultant at ICF Incorporated and the Inter-American Development Bank; a senior economist at the National Science Foundation and the Departments of Agriculture and Interior; and a branch chief at the Bureau of Economic Analysis. He received his doctorate in economics from Columbia University. He has taught at Columbia University, American University, Georgetown, and Virginia Tech. Since 2006, Dr. Payson has been executive director of the Association for Integrity and Responsible Leadership in Economics, and in 2009–2010 he was president of Society of Government Economists. He is author of four other economics books. --This text refers to the hardcover edition.

Few people working in university economics departments over the past few years could be unaware of the rising tide of criticism about the profession. From the collective failure of economists to predict the GFC; complaints about the narrowness of mainstream curriculum and poor teaching, to the lack of ethical behaviour among some individual economists, the discipline has been described as “in crisis.” Within the towers of academia, however, few economists seem to be listening, or even concerned with, the increased level of attacks. It is this lack of response that motivates Steven Payson’s recent book.... This book adds to the growing calls for change in the way the economics profession operates., International Review of Economics Education

It is clear that it is time to change economics, and Payson is yet one more voice that (hopefully) will make such change inevitable., The London School of Economics and Political Science Review of Books

Thankfully, no knowledge of advanced mathematics is required to read Payson’s book or to understand his examples, which he carefully and artfully explains with words and pictures. , Financial History

The book is written in a strong tone and the straightforward approach of the author is certainly not commonly seen. . . . this was an interesting read, and should provide fodder for reflection and discourse for a member of the academia., Journal of Higher Education Policy and Management

Steven Payson, the author of this provocatively titled book, is a former career federal government economist who has the temerity to argue that economics could be a useful science if mainstream academic economist theoreticians would simply adopt and employ the scientific method in a serious effort to provide an understanding of the world in which we live. Instead, he convincingly argues, the culture of academic economists encourages and rewards a mathematical modeling onanism that is not only not “seminal,” but is instead practically barren of any contributions to that understanding. . . . There is much anger and outrage expressed by the author in the course of his argument, and yet the book is not just a polemic. If Payson’s critique is on the mark, the question of what to do is certainly an important one. , The Quarterly Journal of Austrian Economics

Payson’s career has given him a rare perspective on economics in both practical policy use and in academia. He uses the fundamental insight of economics itself, that of the impact of incentives on behavior, to build a powerful indictment of the academic economics profession in the United States. Economics occupies a dominant position in public policy making, and this book will be an eye-opener for the general public. -- Paul Ormerod, Volterra Partners

I defend the right of academics in genuine sciences to set their own agendas free of political interference: they are the best judges of the best ways to extend their research. This does not apply to economics. As Payson explains, economics today is like Astronomy before Copernicus, hiding behind academic freedom to perpetuate a fantasy model of reality, undisturbed by its real world failures. It needs to be disturbed by the public, students, business people and politicians. That is the only hope for a realistic economics. -- Steve Keen, Kingston University

To be polite, everyone is aware that the economics profession is facing a large number of “issues.” Payson’s book shines a bright light on a number of these issues. Whether or not you agree with him on the solutions, this book is worth reading. You can’t go more than a few pages without running into something you’ve seen or heard in the profession that makes you wonder where economics is going. -- W. Charles Sawyer, Texas Christian University --This text refers to the hardcover edition.

3.5 out of 5 stars
3.5 out of 5
4 customer ratings
How does Amazon calculate star ratings?
Amazon calculates a product’s star ratings based on a machine learned model instead of a raw data average. The model takes into account factors including the age of a rating, whether the ratings are from verified purchasers, and factors that establish reviewer trustworthiness.
Top Reviews

Jeffrey Funk
4.0 out of 5 stars and great metaphors. He describes how most economic papers are ...
Reviewed in the United States on November 2, 2017
This is very timely book. As public anger with rising university tuition, falling job prospects, and less free speech increases, this book provides an insightful analysis of one important university major, economics. While students want more practical courses and policy makers are struggling with falling economic productivity, economics is running in the opposite direction with research and publications that have little to do with the real world. Payson describes the problems with academic research in clear prose, interesting examples, and great metaphors. He describes how most economic papers are meant to impress colleagues, not explain economics to policy makers, students, or even colleagues. Although he admits there are many fine economists who do add value, he also criticizes the leaders of the field for being unwilling to tackle these problems, mentioning Nobel Laureates along the way.
Most forcefully, he argues that these economic papers have become a major impediment to economic growth. By becoming a proxy for qualifications, major economic institutions such as the IMF and World Bank choose people for high ranking posts based on their academic publications. But because these publications have little relevance for the real world, high ranking posts are filled with people who do not have the ideas or experience to adequately perform the jobs.
This book should be a wakeup call to economists, just as the work of Robert Gordon and Tyler Cowen should be. As productivity growth continues to slow, policy makers need good research from which to base their policies. But as Payson shows, this research is not emerging because the field is lost as he says in a form of “lah-lah” land. This will become increasingly problematic as populist leaders propose extreme policies in an attempt to satisfy an unhappy populace.
Jeff Funk
Retired Associate Professor
National University of Singapore
Author: Technology Change and the Rise of New Industries, Stanford University Press
Read more
2 people found this helpful
Helpful
Comment Report abuse

Cars fan
5.0 out of 5 stars A good book for all of us, but a great book for economics researchers and practitioners.
Reviewed in the United States on April 18, 2018
I found Dr. Payson’s book to be extremely valuable to read. I also found it to be very understandable and enjoyable. In order to undertake a subject like this, he needed a great degree of integrity and bravery to take on serious problems in his environment of economics and to write about what those problems are, then to propose what to do to fix it. It is in all of our interests that economics be approached as a science and those practitioners be bound to ethical duties to society. It was shocking to read in his book, and to hear in these videos, that economics literature and professional practice might not live up to those basic standards. I can only hope that this body of work creates a transformational shift in thinking and action for how the profession of Economics progresses and lives up to the goals Steve sets for his fellow colleagues, and the rest of us.
Read more
One person found this helpful
Helpful
Comment Report abuse

GG
1.0 out of 5 stars One Star
Reviewed in the United States on June 11, 2018
If only 3rd rate book writers could stop failing us.
Read more
3 people found this helpful
Helpful
Comment Report abuse
See all reviews from the United States