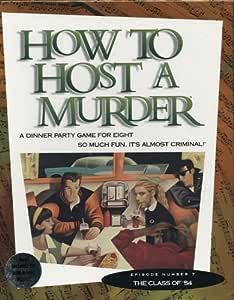 Decipher How to Host a Murder: The Class of '54

Brand: Decipher
3.9 out of 5 stars 30 ratings
| 9 answered questions
Available at a lower price from other sellers that may not offer free Prime shipping.

Shop toys for your little ones
Beat the rush and shop new and exciting toys, games, and gifts for kids Start now

The Class of '54 installment of How to Host a Murder includes all the necessary items for planning and hosting a four-hour mystery dinner party for eight people. It is probably the easiest in the series for the aspiring murder-party host, but not because the mystery is easy to solve. Rather, it's because take-out burgers and fries would only enhance the game, and most of the players will have no problem putting together a costume (OK, a poodle skirt could be a bit tricky to find--but it isn't required). Nevertheless, the designers of the game's Host Guide have put together a more challenging (and more tasty) menu of brandied pot roast for ambitious hosts, and the cassette tape, featuring a malt shop atmosphere and Sargent Joe Flighty's tough-cop narrative, goes a long way toward setting the mood. After listening to the taped introduction, each of the eight players must scour the player books to find out who his or her character will be--from Joe Dierdre C. Deucer to Joseph K. Awledge. All are graduates of Roley City High's class of '54, but only one is the killer of rock star Rock N. Roley. Who will solve the murder? In addition to the Host Guide, eight player's books, and the tape, the package contains a map of the crime scene, secret clues, guest invitations, and nametags. --Patrick O'Kelley

Must be at least 18 or over to purchase.

3.9 out of 5 stars
3.9 out of 5
30 global ratings
How are ratings calculated?
To calculate the overall star rating and percentage breakdown by star, we don’t use a simple average. Instead, our system considers things like how recent a review is and if the reviewer bought the item on Amazon. It also analyzes reviews to verify trustworthiness.
Top reviews

red bear787
5.0 out of 5 stars Class Reunion Murder
Reviewed in the United States on July 14, 2012
Verified Purchase
Our family used this game to celebrate my daughter in laws 30th birthday. I set a side table to look like a malt shop and everyone really dressed to their part. The first ten minutes we just laughed at everyone's costumes. We made 1950's type food, meatloaf, macaroni and cheese and made home made ice cream. It was a bit of work and preparation but it was really a fun night and everyone really stayed in character trying to solve the mystery.
You have to have a week or two ahead lead time to send out invites and give people time to gather their props for their costumes. We had lots of laughs and it was really a fun evening. We will do this again.

JennyChaco
5.0 out of 5 stars So Much Friggin Fun!!
Reviewed in the United States on April 4, 2015
Verified Purchase
Just received this and will be using it in a few weeks. Have played two of these games in the '80s and loved them. What's nice about this is they now use a CD instead of audio tape. The participants dress for their part and we eat, drink, laugh and at the end of the evening - the murderer is revealed. Very fun. This seller was quick to ship and the game arrived in brand new condition. Received this in 2 days because of Prime, which I suggest highly!!
Read more
One person found this helpful
Helpful
Comment Report abuse

Nancy Gaston
4.0 out of 5 stars Dependable Fun
Reviewed in the United States on December 11, 2015
Verified Purchase
We'd used earlier kits in this series, and find them fun and dependable. The inclusion of a cassette tape is rather outdated, and we didn't play the tape but shared the info in a more dynamic fashion. We also expanded the roles to 12 by inventing some characters who seemed to have an equally good time--perhaps a better time as they knew they weren't suspects!
Read more
Helpful
Comment Report abuse

Maren McBride
4.0 out of 5 stars Class of '54 How to Host a Murder
Reviewed in the United States on December 27, 2012
Verified Purchase
I wish they would come out with newer versions of these awesome games. Cassette tapes are a little....difficult to play nowadays if you haven't hung on to a cassette player. However, these games are so much fun, especially if you have friends who like to laugh and are good sports. We have had two of these parties now and have gone all out. They were both a blast. You can only play once, but I think it's worth it. Pass it along to someone else to enjoy when you are done.
Read more
Helpful
Comment Report abuse

Helena's Grandma
5.0 out of 5 stars How to Host a Murder: The Class of '54
Reviewed in the United States on March 3, 2017
Verified Purchase
Purchased product for a New Years Eve Party; all had a wonderful time. We all dressed up and used the recipe enclosed to host the dinner. It was fun trying to figure who the murderer was.
Read more
Helpful
Comment Report abuse

Page 1 of 1 Start overPage 1 of 1
This shopping feature will continue to load items when the Enter key is pressed. In order to navigate out of this carousel please use your heading shortcut key to navigate to the next or previous heading.
Back
Next
Pages with related products. See and discover other items: chess board only, ocean party, poodle skirt, 2 person games