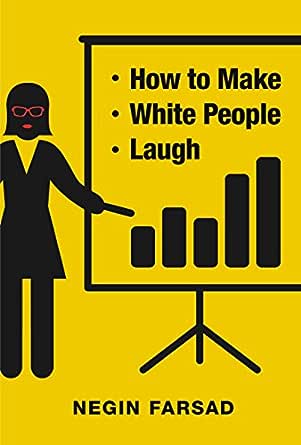 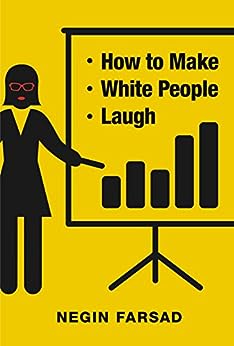 "This book is more than funny-it's on David Sedaris-level first-class perfect fucking hilarious funny. I laughed so hard, I made a spectacle of myself."―Julia Sweeney, Comedian, Writer, and former SNL cast member

"A hilarious and personal take on the complexities of being non-white in America today. This book makes racial politics a bit easier to swallow."―Reza Aslan, bestselling author of No god but God and Zealot

"Apparently, Negin did not spend her childhood in the Irish countryside. She was never a beat jazz innovator, and her marriage to Douglas Fairbanks was unconsummated. This long overdue book not only 'sets the record straight' but also improves the whole structure of society. I thank Ms. Farsad for that. You should do the same."―Janeane Garofalo, Comedian

"Negin Farsad whips out some smart racial politics . . . with a side of fart jokes and the result is a hilarious and pungent book."―Aasif Mandv, Daily Show correspondent, actor and author of No Land's Man

"Farsad's fresh and funny voice is perfect for presenting tactics to fight anti-Muslim sentiment in the U.S., and her work is intriguing and enjoyable to read."―Publisher's Weekly

"How to Make White People Laugh will help answer some of the questions people have been too scared to ask. And get you laughing."―Refinery29

"Hilarious and groundbreaking...Farsad carves out a new space to talk about cultural and political identity."―BookWitty.com --This text refers to an out of print or unavailable edition of this title.

Negin Farsad is an American comedian, actor, writer, and filmmaker of Iranian descent based in New York City. Like most comedians, she has a master's degree in African-American studies. She was named one of the 53 Funniest Women by the Huffington Post, one of 10 Feminist Comedians to Watch by Paper magazine, and was selected as a TEDFellow for her work in social justice comedy. She has written for/appeared on Comedy Central, MTV, PBS, IFC, Nickelodeon, and others. She is director/producer of the feature films Nerdcore Rising starring Weird Al Yankovic and The Muslims Are Coming! starring Jon Stewart, David Cross, and Lewis Black (both available on Netflix). Her next film, 3rd Street Blackout, starring Janeane Garofalo and Ed Weeks, will be released in 2016.

4.3 out of 5 stars
4.3 out of 5
35 customer ratings
How does Amazon calculate star ratings?
Amazon calculates a product’s star ratings based on a machine learned model instead of a raw data average. The model takes into account factors including the age of a rating, whether the ratings are from verified purchasers, and factors that establish reviewer trustworthiness.
Top reviews

Fremont Williams
5.0 out of 5 stars Crossing the Cultural Divide
Reviewed in the United States on August 6, 2016
Verified Purchase
A humorous yet poignant account of growing up Iranian American in a White majority culture and trying to find her place in it. The author even identifies with African Americans since they are a minority group set apart from White privilege. Humor turns out to be a good coping mechanism in navigating these cultural waters and she is like an Ambassador for crossing the cultural divide and understanding and accepting our differences. As maya Angelou said, "We are more alike, my friends, than unalike!"
Read more
Helpful
Comment Report abuse

Libby Waffles
5.0 out of 5 stars Delightful and Insightful. Highly Recommended.
Reviewed in the United States on September 30, 2017
Verified Purchase
I loved this. From start to finish.
Bought it on audible looked forward to my commute all week so I could keep reading/listening. I missed out on some of the charts and graphs (perhaps there's a way to see those on a Kindle? I missed it.) but her voice is just so expressive and her timing is so great. Reading/listening I laughed out loud a lot. So much funny AND perspective on how to make the world a better, more compassionate world.
Just bought three hardcopies as gifts for my conservative uncle and two friends in their thirties.

AmzonQuitSellingMyPrivateInfo
5.0 out of 5 stars Refreshing and hilarious
Reviewed in the United States on January 24, 2019
Verified Purchase
A lot of depth, great points, original, all conveyed through the lightness of humor. Great writing. Breath of fresh air reading something unique, and about an overlooked narratives that desperately needs attention.
Read more
Helpful
Comment Report abuse

mimo
3.0 out of 5 stars NO cover
Reviewed in the United States on August 20, 2018
Verified Purchase
book is in OK condition, not good as advertised and has no obvious cover
Read more
Helpful
Comment Report abuse

Auntie M
4.0 out of 5 stars Very humorous!
Reviewed in the United States on April 13, 2017
Verified Purchase
The book was funny, but got the point across. The first few chapters were funnier and pointier than the later chapters, though.
Read more
Helpful
Comment Report abuse

Farnorthtx
5.0 out of 5 stars I'm white!
Reviewed in the United States on October 28, 2018
Verified Purchase
it made me laugh. i'm going to try it on other white people. thanks Negin!
Read more
Helpful
Comment Report abuse

Crafty Gay
5.0 out of 5 stars Negin is Brilliant! SO FUNNY!
Reviewed in the United States on September 27, 2017
Verified Purchase
Must read for ALL people! So funny, smart, witty...I could go on and on
Read more
Helpful
Comment Report abuse
See all reviews from the United States

TODD C GRAY
5.0 out of 5 stars For sure & yes
Reviewed in Canada on September 20, 2016
Verified Purchase
Heard her on CBC Radio and it made me aware of this book. The author is a Honey Mustard enthusiast, have you tried the Cayenne Pepper Mustard?
Read more
Helpful
Sending feedback...
Thank you for your feedback.
Sorry, we failed to record your vote. Please try again
Report abuse