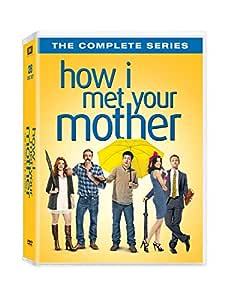 How I Met Your Mother: The Complete Series

How I Met Your Mother: The Complete Series

The year is 2030. Ted Mosby is relaying the story of how he met his wife to his daughter and son. The story starts in the year 2005, when then twenty-seven year old architect, Ted, searches for the woman of his dreams in New York City with the help of his four best friends.

4.6 out of 5 stars
4.6 out of 5
1,677 global ratings
How are ratings calculated?
To calculate the overall star rating and percentage breakdown by star, we don’t use a simple average. Instead, our system considers things like how recent a review is and if the reviewer bought the item on Amazon. It also analyzes reviews to verify trustworthiness.

ST
1.0 out of 5 stars EXTRA Cheap Packaging and Destroyed DVDs on Arrival
Reviewed in the United States on November 15, 2014
Verified Purchase
Once I opened the package, EVERY disk from every season was ruined with glue/epoxy blobs. The individual season packaging is completely cheap and I had to rip them apart just to get the stuck DVDs out. I've tried soft soap, alcohol, freezing them and nothing can seem to get those blobs of resin off. Sucks even more that this was a gift for my wife that we waited 6 months for and to have it shown up ruined.
Read more

Amazon Customer
1.0 out of 5 stars Packaging is damaging the DVD's
Reviewed in the United States on September 26, 2014
Verified Purchase
Take a look at the high ratings for this box set, and you'll see a pretty common theme, which is that they consist almost entirely of people who love the show but haven't actually purchased this box set.

If you look at the low ratings, you'll see that they are made up of people who have actually purchased this thing, and they are all due to the packing. The packaging is, in a word, horrible. The seasons are all packaged individually in cardboard sleeves (which I already wasn't terribly excited about), and the sleeves bleed glue on to the discs which is impossible to remove and damages the DVD to the point where they skip or won't even read.

Don't buy this set. Not until they fix the issue. Right now it sounds like it's happening to the majority of people who have purchased this. Honestly, Amazon should pull this product until this gets resolved.
Read more
399 people found this helpful
Helpful
Comment Report abuse

Calkate
4.0 out of 5 stars HIMYM full series
Reviewed in the United States on February 10, 2018
Verified Purchase
I was concerned by the variety of reviews I read that the packaging would be flimsy or that there's be excess glue, but I was very pleased with what I received. Each season was packaged individually and they all fit in the larger box. It makes for a good display item and is easy to access, while also being protective of the disks.
Read more

Amazon Customer
5.0 out of 5 stars All around amazing.
Reviewed in the United States on February 20, 2018
Verified Purchase
I purchased this and then I read the reviews. I was quite nervous after reading all the negative packaging reviews but that appears to have been fixed. Each season and the bonus disc all had their own plastic regular DVD case. The box the dad's came in is beautiful. I love the series and it was worth every cent.
Read more

Matthew J. Delisle
4.0 out of 5 stars Amazing show, meh packaging.
Reviewed in the United States on December 20, 2016
Verified Purchase
I won't get into the series as much as I will the packaging. If you're looking at the Complete Series on DVD.. you've probably seen the show. It's one of the best written comedies in recent years no question with some of the best recurring jokes I've seen in a show. The characters are well thought out, hilarious in their own way, and fit together perfectly with the others. I've watched this show 3092348 times on Netflix but with shows I like constantly coming off, I decided to play it safe and buy the collections of my favorite shows so I don't stress about it.

Now the packaging, this is my letdown. Buying this was much cheaper than buying the seasons separately, but I kind of wish I took that route anyways. The package is HUGE (lol). It's meant to look like the playbook from the show it seems and it's way too tall to fit on any of me media shelves. I ended up laying it flat on the top where I can barely reach since it's the only place I could put it. You'll open it up and each season is in a pretty flimsy cardboard packaging with some pictures and the episode guide. These aren't awful but with the package being tall, it's almost better to lay it flat because of the way each season is stuffed in there. The problem with the glue and ruined discs reviews have mentioned is a non-issue anymore, the company fixed it and all my DVD's were fine.

With that said, if you have the money and don't mind, I recommend buying the seasons separately, but if there's a deal like there was when I bought this, the packaging sucks, but at least I own them all in case Netflix decides to break my heard again.
Read more
16 people found this helpful
Helpful
Comment Report abuse

M. Aquilino
1.0 out of 5 stars Horrendous packaging
Reviewed in the United States on January 5, 2016
Verified Purchase
I don't know how I didn't see all the other reviews commenting on the packaging. Worth the extra money to get each season individually to have REAL cases and episode directions. Do NOT get this unless you absolutely require the extra bonus disc.

1. Why do complete series sets have to use the stupid cardboard sleeve method of holding dvds? Terrible.

2. You can't see what season you are pulling out. You need to pull them all out basically to get what you want, and it's very difficult to pull them out without using gravity to help you, and in doing so, dvds start falling out of the stupid sleeves. Stupid design.

3. The season sleeves are VERY hard to put back into the box. It is a tight fit. They're all bent in different directions. Horrible.

4. No book or sheet or anything with episode numbers or descriptions. Just a list of the episodes on the front of each cardboard sleeve. Lazy.

I'm going to try to return and buy each season individually. Stupid stupid stupid. And I am a complete idiot for purchasing this. Don't be as stupid as me =P
Read more
10 people found this helpful
Helpful
Comment Report abuse

Leilani
4.0 out of 5 stars Did not receive exactly what I ordered
Reviewed in the United States on August 5, 2017
Verified Purchase
I ordered this set because I wanted all seasons contained in a single package. Instead I received 9 separate dvd cases. It's like they ran out of the fancy case and just gave me the individual seasons. Based on complaints I've seen about disc storage, it might work out better this way, but still. I don't appreciate getting something other than what I ordered. ....I tried adding photo of what I got but app isn't letting me
Read more
6 people found this helpful
Helpful
Comment Report abuse

Chad C.
1.0 out of 5 stars Discs don't work.
Reviewed in the United States on September 7, 2016
Verified Purchase
I am giving this product one star. It is specifically about the quality of the packaging and dvd's not about the show. If you ask me they made a horrible choice with the last season but that is not what I want to talk about. I have problems with the dvd's just completely freezing! I haven't made it through the whole series however the seasons that I have tried watching at least one or two of the three discs will freeze half way through, to the point where I can't even get the dang thing back to the menu, skip forward, backwards anything! To fix the problem sometimes have to completely unplug my Blu-ray! I'm disappointed that they are continuing to sell this product in this condition. I love this show and wish that I could actually watch it, if only.
Read more
14 people found this helpful
Helpful
Comment Report abuse
See all reviews

Its at a great price these days and totally worth the money-enjoy.
Read more
6 people found this helpful
Report abuse

SEO
5.0 out of 5 stars I love it!
Reviewed in the United Kingdom on November 27, 2017
Verified Purchase
Although some of the special features stated on the ninth season weren't present, this didn't effect my viewing experience. The set arrived promptly and I thoroughly enjoyed my first viewing of all nne season. HIMYM is a spectacular show with a great cast and some awesome guest appearances. I would encourage people to watch this series and would recommend purchasing here as I didn't have a single problem with any of the many discs.
Read more
One person found this helpful
Report abuse