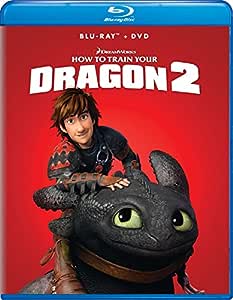 How to Train Your Dragon 2

From DreamWorks, the studio behind the Academy Award-Nominated film, How to Train Your Dragon, comes the next chapter in the epic trilogy. When Hiccup and Toothless discover a secret ice cave with wild dragons and a mysterious Dragon Rider, the two friends find themselves in an epic battle to save the future of man and dragons! Also includes the all-new adventure DreamWorks Dragons: Dawn of the Dragon Racers.

From DreamWorks, the studio behind the Academy Award-Nominated film, How to Train Your Dragon, comes the next chapter in the epic trilogy. When Hiccup and Toothless discover a secret ice cave with wild dragons and a mysterious Dragon Rider, the two friends find themselves in an epic battle to save the future of man and dragons! Also includes the all-new adventure DreamWorks Dragons: Dawn of the Dragon Racers!

4.8 out of 5 stars
4.8 out of 5
961 customer ratings
How does Amazon calculate star ratings?
Amazon calculates a product’s star ratings based on a machine learned model instead of a raw data average. The model takes into account factors including the age of a rating, whether the ratings are from verified purchasers, and factors that establish reviewer trustworthiness.

LegoDadTop Contributor: Architecture
VINE VOICE
5.0 out of 5 stars Great quality, and love the extras on the Blu-ray
Reviewed in the United States on November 12, 2014
Verified Purchase
This is less a review of the movie (which was phenomenal) and more a review of the Blu-ray itself.

My 11 year old and I love the Dragon series - first movie, the first two seasons of the TV show, and the second film. We love the growth of the characters, and thought they did an unbelievable job with the second film, since it's so difficult to follow up something as good as the first movie with something that can measure up. They nailed it.

So I was looking forward to the Blu-ray release. And it's everything I had hoped. The movie itself looks gorgeous, sounds great, and I've had no complaints at all with the quality. But what really makes this a 5 star item is the extras. Yes, the 26 minute short about the beginnings of Dragon Racing is cool and fun (although not the same quality of animation as the movie, it's more on par with what DreamWorks did with the TV show, but a little better) and was a big hit for my son, but I really liked the deleted scenes. They gave a bit more insight into some of the storyline, and I always love hearing things about how the story developed, how they changed something, and no longer needed a scene. Some of them are rough animations since they weren't cancelled until they were that far along with the scene rendering, others are storyboards.

There are some kid-friendly (i.e. cute but not very deep) bits about Drago's weapons he uses to catch dragons, and other similar things, but for me, what made this so great was the almost hour long "The Making Of" video they had. My son of course was bored with much of it, since he just wanted to see the "cool" things and not hear the background, but he'd perk up every time they'd show one of the actors or actresses and he'd yell, "That's Hiccup!" or "That's Astrid!" I like it when he can see the people who do the voices, and put a face to them since he knows the voices so well. Sometimes it's a good fit with the character they play, sometimes it's not, but it's always entertaining. They delved into their research and trips to Norway to view locations for ideas, and even had some great footage about a group of kids they showed the movie to before it was released to get their take on it, what they liked, what they didn't like, and what they thought the message of the movie was. There was some of the technical work shown, some bits of some of the meetings they had, and just a good flow from beginning to end of the creation of the movie that was very well done. They showed some of the actor's reactions as they were learning things about their character and how they've changed for the new movie, and it was really cool to see these actor's enthusiasm and love of their characters and the growth from the first movie to the second.

The movie looked great, sounded great, and the extras were above and beyond, so this is definitely a great deal for any fan of the HTTYD series.

MissAnnThropic
5.0 out of 5 stars And here I am, impatiently waiting for the third movie...
Reviewed in the United States on February 3, 2016
Verified Purchase
An even bigger and more exciting sequel to the original heartwarming film. At first, I was skeptical of the HTTYD series when it came out since I hadn't been satisfied with anything Disney has produced in the way of animated films lately (and Dreamworks studio has always appeared to play second fiddle to Disney).

On one off night, I took a chance on the first film from a local DVD rental near my home. Then, I watched this sequel on Netflix. Then, I watched both again the next morning. And then, finally, I bought both from Amazon when I had to return the rental later that night. (It was a very impatient two days of waiting for these films to arrive!) HTTYD and HTTYD 2 are some of the best children's movies to see the silver screen in recent years, and the mesmerizing relationship that builds between Hiccup and Toothless brings back feelings of childhood amazement and wonder that you might have forgotten existed. This film is well-scored, well-written, with a great ensemble cast of voice talent and breath-taking animated scenes of flight and action that form a truly incredibly story. I love both films for different reasons, and although the first film has more of a subtle magic to it, this sequel builds on an already-exciting world with great new ideas and even more action and adventure. I love them both equally, and I can't wait for the third one to come to theaters!

If you haven't seen this film before, I MUST recommend that you watch it, and if you have seen it before, then what exactly are you waiting for? Go ahead and add it to your collection! Either way, you will be bringing home a special movie that someone of any age could enjoy.
Read more
Helpful
Comment Report abuse

M. Kearns
2.0 out of 5 stars Disappointed
Reviewed in the United States on December 20, 2014
Verified Purchase
I loved the first movie. LOVED it! I was so excited when this movie was announced. However, the sequel lacked any of the charm of the first movie. I blame the writing. The dialogue was bland and the jokes seemed forced. The emotional moments lacked any impact. The animation seemed off too, like the characters' movements during dialogue was choppy and unnatural. Maybe it has something to do with it being animated for 3d and watching in 2d. The first movie didn't have this issue. Otherwise the animation was beautiful, but it wasn't enough to overlook the movie's significant faults.
Read more
4 people found this helpful
Helpful
Comment Report abuse

N. BeitlerTop Contributor: Pets
4.0 out of 5 stars While not as outstanding as the original, this movie is still the best new animated movie to arrive on DVD and Blu-ray in 2014!
Reviewed in the United States on December 7, 2014
Verified Purchase
While not as good as the original film, this remains the best animated movie I saw in 2014. It takes the story and characters in some fresh directions, expands their imaginary world, and keeps things interesting.

The animation was very well done, again, though I wasn't all that impressed with the 3D features I saw in the theater. I would prefer the normal version of the film over the 3D version, so if that is something you are genuinely thinkng about, keep in mind that the 3D effects are nothing special.

I considered the first HTTYD movie a "must buy." I don't know that I would say the same of this second installment, but it is still very enjoyable, and I'm sure it will be on many, many kids' Christmas wish lists for the 2014 holiday season.
Read more
Helpful
Comment Report abuse

Elizabeth O'Neal
5.0 out of 5 stars Even better than the first movie!! Get it!!
Reviewed in the United States on December 5, 2014
Verified Purchase
Loved this movie! The Blu-ray quality was excellent...we have a 1080p TV, so the picture was gorgeous. HIGHLY RECOMMEND! I told myself that I was buying this "for the kids" for a Christmas present, but couldn't resist and ended up opening it early on MY birthday in late November!! LOL We had a nice dinner out, then came home to eat dessert and watch this movie...very quiet, but it was the best birthday I've ever had. This movie left all of us (2 adults and 2 kids) feeling happy and downright exhilarated. The kids were so excited and zooming around the living room and I didn't have the heart to tell them to knock it off because I totally understood. :-) My husband loved this movie too, and he hardly EVER likes "kid movies."
Read more
Helpful
Comment Report abuse
See all reviews from the United States

Page 1 of 1 Start overPage 1 of 1
This shopping feature will continue to load items when the Enter key is pressed. In order to navigate out of this carousel please use your heading shortcut key to navigate to the next or previous heading.
Back
Next
Pages with related products. See and discover other items: cate blanchett movies, train movies, Hoe Gifts