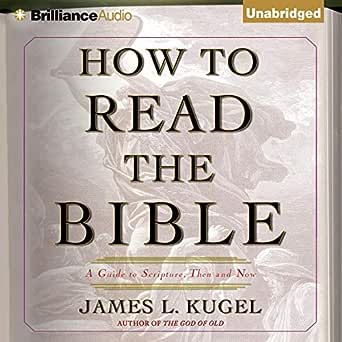 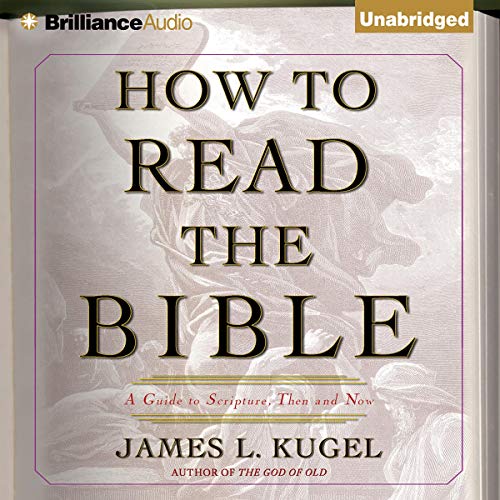 How to Read the Bible: A Guide to Scripture, Then and Now

How to Read the Bible: A Guide to Scripture, Then and Now
James L. Kugel (Author), Mel Foster (Narrator), Brilliance Audio (Publisher)
Get this audiobook free.
$14.95/mo after 30 days. Cancel anytime

4.6 out of 5 stars
4.6 out of 5
171 global ratings
How are ratings calculated?
To calculate the overall star rating and percentage breakdown by star, we don’t use a simple average. Instead, our system considers things like how recent a review is and if the reviewer bought the item on Amazon. It also analyzes reviews to verify trustworthiness.
Top reviews

Chad Bird
5.0 out of 5 stars Scholarly Yet Readable
Reviewed in the United States on September 18, 2020
Verified Purchase
If someone were to tell me that they’re looking for a book that goes through the whole Hebrew Bible; documents (in a fair way) the traditional and critical interpretations of the contents; pauses on occasion to provide the background of the growth of certain types of interpretations; balances Jewish and Christian ideas; is scholarly but readable; serious but humorous at times; and, in the end, offers one possible avenue for traditional believers to appreciate critical scholarship while also not abandoning their faith; then I’d say, Let me tell you about this book by James Kugel.
Read more
3 people found this helpful
Helpful
Comment Report abuse

schwartz7013
5.0 out of 5 stars Faith vs. Science: You be the Judge
Reviewed in the United States on July 11, 2018
Verified Purchase
This book is written in order to explore two broad themes: how did faithful Jews and Christians read the Bible in the centuries leading up to the beginnings of modern archaeology and textual criticism; and how has the work of these technical experts put a new spin on the texts and challenged what we believed? Kugel does not try to reconcile the two. But if you would like a clearly written, concise explanation of the differences between those two camps, this book does a bang-up job.
Read more
6 people found this helpful
Helpful
Comment Report abuse

H. Schneider
5.0 out of 5 stars Only worthless, low, power-hungry scoundrels are interested in ruling
Reviewed in the United States on January 2, 2017
Verified Purchase
A fascinating look at ancient and modern biblical scholarship. It leads us through the Hebrew Bible/ Old Testament and reports on interpretations as well as results of historical, archaeological, and linguistic research into its stories. This is given by a man who categorizes himself as an Orthodox Jew. I could imagine he is not entirely popular in that camp. He will certainly not have friends in literalist Christian circles.

The book explores origin, historicity, and interpretations of the familiar stories and words. Linguistics and archaeology have made significant contributions, but many important questions seem not to have been answered once and for all. Maybe they never will.
Questions like 'who wrote these texts?' have been answered in too many different ways to leave us with a clear conclusion. We don't know for sure, if key persons like Abraham, Moses, Joshua, or even David really existed, or if they are mere giants of mythology. Or if anything like the exodus happened. Or the conquering of Canaan by an invading Israel. Or if the alleged wisdom of King Solomon has a base in truth. (Mustn't he rather have been quite a loser, in view of the breaking up of his kingdom as soon as he was gone?)
What about the beginnings of monolatry and monotheism? No definite answers.
Which child did Isaiah's prophecy, about the child that will be born, that Christmas lore likes to emphasize, refer to, actually? And more of the kind.
I recommend this book if you want to update yourself on the various disputes about biblical interpretation.

How does the author reconcile the findings, that he reports here, with his personal religious attitude? He doesn't. '...modern biblical scholarship and traditional Judaism are and must always remain completely irreconcilable.'
In the last chapter, the author admits to his personal contradiction: his religious self considers modern Bible research irrelevant. A split mind.

My headline is a quote from page 411. The chapter deals with the kingless period of Israel. Whether the author meant to comment on modern politics in Israel or the US is not clear to me.

Joseph M.
5.0 out of 5 stars Great Book on Understanding the Old Testament
Reviewed in the United States on February 8, 2019
Verified Purchase
A better title for the book would be "How to Read the Old Testament." The book only covers the Old Testament and is very informative. A fascinating study of the Old Testament of the Bible, which is considered the books for the Jewish religion, and a preface for the Christian religion. This is a great book and I am glad that I took the opportunity to buy and read this book. The author writes in a very understandable book about a difficult subject. Highly recommended to anyone who wants to know and understand the Jewish religion and what influenced the Christian religion. One of the very few books that I consider worth rereading over and over again.
Read more
2 people found this helpful
Helpful
Comment Report abuse

oakandleaf
5.0 out of 5 stars Fascinating
Reviewed in the United States on December 2, 2019
Verified Purchase
Such an eye-opening book. I am just getting into the world of Biblical Scholarship and found this book absolutely fascinating. It's hard to read in big chunks as there is so much to take in. I was trying to tell everyone I know about things I was reading in this book. I really appreciate that the author presents multiple perspectives and lets you the reader decide what you believe. I recommend this to anyone who wants to be challenged in their way of thinking.
Read more
Helpful
Comment Report abuse

Claudette Warlick
5.0 out of 5 stars Scholarly but readable.
Reviewed in the United States on December 2, 2019
Verified Purchase
This book explains what was meant when it was written and what it can mean for us now. Archeology, philology and historical research make the Old Testament relevant for modern readers. As the author is a Jew the book doesn't include the New Testament, which is a pity because his mind could make it also more readable!
Read more
One person found this helpful
Helpful
Comment Report abuse

jurisdoc
5.0 out of 5 stars An Invaluable Guide
Reviewed in the United States on April 30, 2017
Verified Purchase
What a refreshing and invaluable book! Kugel is a magnificent explicator who succeeds in making the historical and religious stew of the "Old Testament" come alive in all its complexity. Only quibble is with the publisher (Free Press, a division of Simon and Schuster): my edition of the book (2007 paperback) is lacking a whole "signature" of pages, from pp. 263 through 294. Be sure to check that your copy includes those pages.
Read more
One person found this helpful
Helpful
Comment Report abuse
See all reviews

Edward Stang
4.0 out of 5 stars Lots of good stuff
Reviewed in Canada on October 25, 2019
Verified Purchase
Lots of good stuff, but too complicated for this lay reader. In my opinion Professor Kugel really intimate with the Bible.
Read more
Report abuse

GreenShoes
5.0 out of 5 stars Good commentary
Reviewed in Canada on April 19, 2018
Verified Purchase
Quite readable although he sometimes skips portions, just to keep the book from being 2,000 pages
Read more
Report abuse

Robin Myerscough
5.0 out of 5 stars Five Stars
Reviewed in the United Kingdom on March 3, 2017
Verified Purchase
Great book I was pleased to obtain a copy
Read more
Report abuse
See all reviews