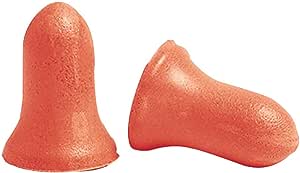 Extremely loud work environments demand the best possible hearing protection. These MAX Foam Earplugs boast the highest Noise Reduction Rating (NRR 33) of any disposable earplugs on the market. So it's no surprise they are also the most used PE foam earplugs in the world.

The soft polyurethane foam delivers longwearing comfort, and the bell shape matches the contour of the inner ear for a safe, secure fit. The shape of MAX Earplugs also helps to resist the tendency some earplugs have of backing out of the ear canal. The soil-resistant, closed-cell skin also promotes safety as it prevents dirt from building up and inhibits ear infections.

With clean hands, roll the entire earplug into the narrowest possible crease-free cylinder.

Reach over your head with a free hand, pull your ear up and back, and insert the earplug well inside your ear canal.

Hold for 30 – 40 seconds, until the earplug fully expands in your ear canal.

If properly fitted, the end of the earplugs should not be visible to someone looking at you from the front.

Howard Leight by Honeywell MAX Disposable Foam Earplugs offer the best hearing protection in the workplace of any single-use earplugs (33 NRR). The pre-shaped, contoured foam is designed to fit almost any ear canal for comfortable all-day ear protection on the job. A closed-cell outer layer prevents dirt from building up. These earplugs are the most used PE foam earplugs in the world and are suitable for use in almost any industry. 200 pairs of earplugs per pack.

4.6 out of 5 stars
4.6 out of 5
1,948 global ratings
How are ratings calculated?
To calculate the overall star rating and percentage breakdown by star, we don’t use a simple average. Instead, our system considers things like how recent a review is and if the reviewer bought the item on Amazon. It also analyzes reviews to verify trustworthiness.

Her snoring was so bad, it sometimes made its way into my dreams, I was dreaming something beautiful and peaceful and then out of the sky I heard “RROOOAAAAAAARRRR!!!!!” and it scared me so bad, it usually took me a few thunderous roars before I woke up thanking god it was only a dream, only to notice the sound is still happening when I was awake, it was horrible, it was a nightmare, I had to go to the guestroom to sleep and that room has no tv, no computer, no video games! I ACTUALLY HAD TO READ FOR FUN!, IT’S MADNESS.

It was time to change so I started a long but productive research into noise canceling headphones and earplugs, I was ready to spend nearly 300 dollars on those crazy Sony noise canceling headsets when I stumbled upon these cheap babies. I tried them for the first time last night, coincidentally it was a day where we were having a lot of workers in and out of the house early into the day when we both are sleeping, they were going to be drilling, hammering, knocking, stumbling, laughing, etc. All this coupled with my wife and her inhuman noise of destruction.

It took me a while to realize what was happening when I woke up, first of all my wife was gone, I am a very light sleeper so normally if she gets out of the bed that’s enough for me to wake up, I was also confused because there were no workers, no sound, no one. So I said “oh well, I guess I lucked out and nobody came today” and when I pulled my earplug off all hell broke loose! Drills, hammers, talking, my wife on the phone on the other room, etc.

This things shut me off from the world to the point where now I am a bit hesitant to use them, I literally felt like being unplugged from The Matrix.

Thank you Honeywell for saving my sanity (and marriage, just kidding, not sure)

Saint
5.0 out of 5 stars Perfect 😍
Reviewed in the United States on November 15, 2019
Verified Purchase
I’ve been using this brand since 1996.
They totally block out almost all types of sound.
They’re perfect for totally blocking out my husband’s snoring, so we’re able to stay married for as long as we have.
Read more
17 people found this helpful
Helpful
Report abuse

Honest Reviewer
4.0 out of 5 stars Good earplugs but slightly irritating
Reviewed in the United States on March 21, 2017
Verified Purchase
I've used earplugs to sleep for 25 yrs. My favorite brand is no longer available. These were my second attempt at finding a replacement. Though they work well, initially, for the first few days, a new pair irritates the inside of my eat to the point of leaving a sore spot. Maybe my eat canal is too small. Either way, I was finding them painful and have switched to a brand that is a green cylinder. They work perfectly.
Read more
62 people found this helpful
Helpful
Report abuse

Julia Y.
2.0 out of 5 stars might be too big for some average ears, therefore painful for longterm use
Reviewed in the United States on April 3, 2018
Verified Purchase
I have used Mack's Ultra Soft Foam earplugs for a year (no longer using them since they changed their formula for the worse), so I can somewhat speak to the differences between the two. I on the 2nd floor of an apartment complex and have both noisy upstairs and downstairs neighbors. To sleep, I almost always need to wear earplugs to block out sounds of TV, loud bass, and heavy walking. I tried these for the first time last night and will be returning them today. The positive is that they block out more sound compared to Mack's. However, they are larger than Mack's and the difference in size will be significant for certain people. Mack's fit comfortably, were not painful to wear overnight, and never fell out if I inserted them properly. These Howard Leights were incredibly painful - it was so bad that the pain woke me up several times at night, and I eventually gave up on using them. My ears hurt even now, hours after I took them out. If you liked the size of the Mack's, these might not be the best sized alternative. Before purchasing these, I decided to try the same brand but in the small size since some reviews suggested that women would feel more comfortable with the small ones. They ended up being much too small.
Read more
15 people found this helpful
Helpful
Report abuse

G. Farney
5.0 out of 5 stars By far my favorite ear plug
Reviewed in the United States on December 21, 2018
Verified Purchase
I ride motorcycles long distances (well, compared to most riders anyway), and also race cars. These plugs have been the most comfortable for long term use, both in terms of wearing for 2-3 hours at a time, 10-12 hours in a day, and upwards of 2 weeks of regular use. Unlike the open cell foam ones that tend to be yellow/orange, these don't seem to pick up ear wax and can be used many times before they require replacement, I've gone on a 2 week motorcycle ride covering over 3000 miles and only used 2 pair. The noise reduction is awesome, they stay put and still allow you to talk on the radio or listen to music. These come in individual wrapped pairs, so it's easy to toss a few pairs into your bag so you'll have them when you need them. If you want to try them out for less, CVS has smaller containers that look (and perform) just like these.
Read more
12 people found this helpful
Helpful
Report abuse

Asolare
1.0 out of 5 stars Not the same product as it used to be = STAY AWAY!!
Reviewed in the United States on December 26, 2019
Verified Purchase
I've happily been using these earplugs for many years but the most recent shipment I bought is very obviously not the same product/quality as before. I knew something was different before even opening the individual packages as I saw many of the individual plastic envelopes they come in aren't properly perforated making them more difficult to open than in the past. But that issue pales in comparison to the problem with the earplugs themselves. When the plugs are taken out of their pouches and rolled to shape them for insertion into the ear most of them from this new batch will not compress properly so have to be thrown away before even being used. I find I have to thrown away the vast majority of them before I can find a single one that is usable. That never happened with any of the ones I purchased previously. This product is now complete garbage and I can't stress enough that you should not purchase this under any circumstances. It has loads of high reviews because it used to be a terrific product. It is the opposite of that now.
Read more
7 people found this helpful
Helpful
Report abuse

John J. Sorensen
4.0 out of 5 stars Noise cancellation
Reviewed in the United States on December 24, 2019
Verified Purchase
Almost total silence using these to sleep. Sometimes they give me a headache. I have to use them, though. An elephant lives upstairs and he's a night owl.
Read more
9 people found this helpful
Helpful
Report abuse
See all reviews

Amazon Customer
1.0 out of 5 stars Massive
Reviewed in the United Kingdom on September 4, 2018
Verified Purchase
I live in a noisy flat, so I need these every day. These are so big, no idea how anyone can use them. After two nights I had blisters in my ears. DO NOT BUY THEM!
Read more
One person found this helpful
Report abuse

Anonymous
1.0 out of 5 stars Awful
Reviewed in the United Kingdom on April 5, 2019
Verified Purchase
Poor quality product. They pop out of your ear and don't actually block out sound. Avoid
Read more
Report abuse

Jane63
5.0 out of 5 stars Peace!!!!
Reviewed in the United Kingdom on November 15, 2018
Verified Purchase
Muffled my husband's snoring so well! They're the best I've tried..
Read more
Report abuse

Nangini
5.0 out of 5 stars Perfect, blocks out all noise
Reviewed in the United Kingdom on September 5, 2015
Verified Purchase
Excellent earplugs. Very comfortable and block out all noise. Great value for money. I've been wearing these for years and always have a good night's sleep with them.
Read more
One person found this helpful
Report abuse