You've subscribed to The Hundred Trilogy! We will preorder your items within 24 hours of when they become available. When new books are released, we'll charge your default payment method for the lowest price available during the pre-order period.
Update your device or payment method, cancel individual pre-orders or your subscription at
Your Memberships & Subscriptions
There was an error. We were unable to process your subscription due to an error. Please refresh and try again. 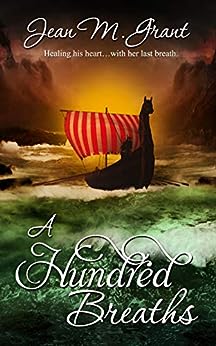 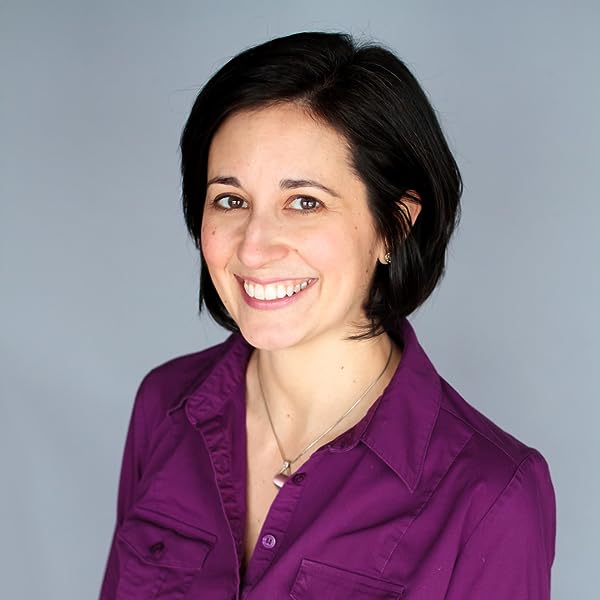 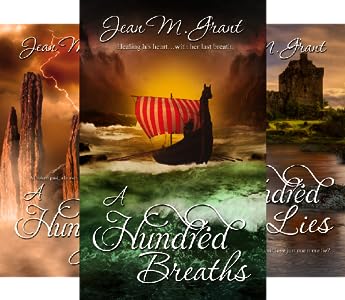 *Runner Up, InD'tale Magazine 2020 RONE Awards (Runner Up in Fantasy category) "A Hundred Breaths" is a daring and fabulous tale of love finding its way no matter the cost. The author excels in plot and character development, and readers will absolutely turn the pages quickly, desperate to hurry and find out what happens next. - Tiffany Landers,  InD'tale Magazine "A Hundred Breaths is a heart stopping medieval romance with a bit of mystical magic thrown in. Historically accurate with plenty of gore in the battle scenes to please any historical fiction reader while an undercurrent of love runs throughout." - N.N. Light's Book Heaven

The first book in the "Hundred" trilogy is laced with merciful healing and stubborn vengeance as cultures clash: the mystical isles people, raiding Norse, and mainland Scots. Each book in the trilogy can be read as a standalone or out of order. Jean takes her research seriously, having visited Dryburgh Abbey and Scotland as well as a reconstructed Viking ship after its trans-Atlantic journey. Find out more on her website.

4.5 out of 5 stars
4.5 out of 5
60 global ratings
How are ratings calculated?
To calculate the overall star rating and percentage breakdown by star, we don’t use a simple average. Instead, our system considers things like how recent a review is and if the reviewer bought the item on Amazon. It also analyzes reviews to verify trustworthiness.

Katie O'Sullivan
5.0 out of 5 stars Loved this historic romance!
Reviewed in the United States on March 18, 2019
Verified Purchase
I really enjoyed this story! It reminded me of was Marion Zimmer Bradley and her Mists of Avalon books which I was addicted to back in high school, where the paranormal is just another part of life for certain people and cultures. That's how it is for Gwyn and her family - at least her mother's family. Her father is a Viking lord who stole his mother in a forced marriage to keep her abilities for himself. Gwyn and her sibling also have the powers of the Ancients - Gwyn's ability is healing, but each time she heals she loses a bit of herself. Her father sees her as a tool, her betrothed sees her as a pawn in a larger power struggle, but she only wants to find a way to keep herself and her siblings safe.

When Simon MacCoinneach kidnaps her and proposes an end to the fighting through a marriage union, she reluctantly agrees to his terms, but there is more going on than either of them know.

The uneasy truce slowly blossoms into friendship and then feelings... and I loved the organic way the author lets those feeling develop. Jean Grant does a wonderful job of creating a rich historic portrait of the medieval villages, manors, and abbey, as well as painting sweeping coastal vistas true to the time period. She also gives us compelling characters who make you root for (or against) them and keep you turning pages late into the night.

Eileen O'Finlan
5.0 out of 5 stars Exciting adventure and romance
Reviewed in the United States on July 10, 2019
Verified Purchase
A Hundred Breaths by Jean M. Grant, the prequel to A Hundred Kisses, is an exciting tale set in 1300s Scotland. The reader is taken on a great adventure as the Scots, the Nordmen, and a race known as the Ancients fight to settle once and for all their struggle for domination. Caught in the middle is Gwyn, half Nordman, half Ancient with the special gift of healing. Though a hostage, Gwyn is no timid pawn. Her grit and spirit as well as her kindness and compassion break through even the seemingly ruthless heart of her captor. Romance and adventure combine to make a truly captivating read!
Read more
Helpful
Report abuse

Greta N. Yoka
5.0 out of 5 stars Great story! Keeps you on the end of your seat!
Reviewed in the United States on February 26, 2021
Verified Purchase
The history and romance will have you not able to put this book down! It’s the first book of a three book series. Read all 3 books and see how the stories and characters connect. The characters in this story grow and change. Two are enemies, but can they become more? Can Simon overcome his past?
Read more
Helpful
Report abuse

booklover
4.0 out of 5 stars Good book!
Reviewed in the United States on April 17, 2019
Verified Purchase
I enjoyed this book. The story was well written and I liked the descriptions. Simon and Gwyn deserved each other and I was glad to see them happy at the end of the book. This is part of a trilogy although it takes place before the first book. Am looking forward to the next book in the series!
Read more
Helpful
Report abuse

Ashley
5.0 out of 5 stars Captivating!
Reviewed in the United States on September 10, 2019
Verified Purchase
A wonderful mix of romance, history, and magic, A Hundred Breaths was so well-written that I felt immersed in the storyline. As a prequel to A Hundred Kisses, it did not disappoint. I would love to see these books as a miniseries!
Read more
Helpful
Report abuse

AD
4.0 out of 5 stars Great book
Reviewed in the United States on March 25, 2021
Scottish warrior Simon MacCoinneach goes with his father, brother, and their men to the Isles to trade with a clan of Nordmen, but the time for peace is over. His brother dies in the ensuing battle, and Simon is injured. The last thing he expected is a beautiful, guileless woman to offer him help, but he doesn’t trust easily.
Gwyn possesses magical abilities as a healer, and she helps anyone who needs it. Her father is a vicious man who has terrorized her community and subjected her family to much pain. After she heals Simon, he kidnaps her in order to force her father into peace.
Gwyn and Simon were interesting characters. She was kind, selfless, and determined to save her younger brother, but her desire to save everyone, even murderers and rapists, was aggravating. I couldn’t connect with Simon. He was bitter and war-hungry, especially in the beginning. After his back-story was revealed and he started to feel guilty about his actions, I finally understood him and began to like him.
I listened to the audio version. The narrator, Ms. Ashford, did a great job with the Scottish and Norse accents. Granted, I’m not sure what Vikings would’ve sounded like back in the day, but I liked her voices for them.
This is a fast-paced story that kept my attention, but the pacing slowed at times since the H/h kept arguing about the same things. Repetition tends to happen, however, when you have two stubborn characters that won’t agree or relent to the other’s will. I prefer this rather than having a wimpy heroine that kowtows to a man. Gwyn was definitely not weak!
I enjoyed all the references to book 1, A Hundred Kisses. The epilogue was the perfect ending for this story and a great preview for the last book in the trilogy.
This book is the prequel to A Hundred Kisses and should be read or listened to first, even though both books are standalones. I listened to Kisses first by mistake, so I learned some spoilers about the prequel. In my opinion, the main characters from one romance book should still be alive and in love in the following book. Killing off the hero or heroine is a big no-no for me, and it completely ruins the HEA. That’s just a pep peeve of mine. While Simon and Gwyn have a HEA at the end of their story, their life together is cut short long before the next book begins.
Anyway, I enjoyed this story a lot, but I wish Simon and Gwyn would’ve had decades together, not just 13 years.
4 Stars
Read more
Helpful
Report abuse
See all reviews