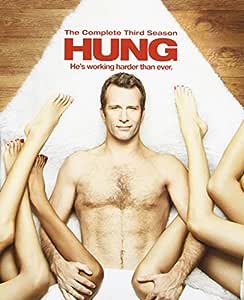 Hung is the hit comedy series from Colette Burson and Dmitry Lipkin (The Riches), and starring Thomas Jane, Jane Adams and Anne Heche. Set in Detroit, Hung continues to revolve around the unorthodox efforts of divorced teacher/coach Ray Drecker (Jane) to generate extra cash – by selling his “winning tool” to desperate women. Season 3 begins with Ray and his unlikely pimp Tanya (Adams) taking matters into their own hands in the face of a (still) recession-plagued economy by opening the “Happiness Consultants Wellness Center for Woman” – a front for their gigolo business complete with “orgasmic living” seminars run by Tanya and “private consultations” with Ray. Meanwhile, as their business begins to yield dividends, Lenore (Rebecca Creskoff – Mad Men, Curb Your Enthusiasm) seeks revenge upon Ray and Tanya for stealing her “lifestyle” idea, and transforms a 25-year-old busboy named Jason (new series regular Stephen Amell – The Vampire Diaries) into a new male hooker to rival Ray.

4.3 out of 5 stars
4.3 out of 5
1,094 customer ratings
How does Amazon calculate star ratings?
Amazon calculates a product’s star ratings based on a machine learned model instead of a raw data average. The model takes into account factors including the age of a rating, whether the ratings are from verified purchasers, and factors that establish reviewer trustworthiness.

Valerie
5.0 out of 5 stars Fresh and Fun
Reviewed in the United States on April 20, 2016
Verified Purchase
This series is an absolute delight. I only wish it would have continued. Thomas Jane... come on... HUNK is what it should be titled. Hilarious and thoughtful, on the money, Anne Heche is as always, adorable in everything. I loved her portrayal of twins on the TV series, Another World, which was another show they took off the air. Why? Definitely a must see if you want to smile. Bring it back, darn you people.
Read more
14 people found this helpful
Helpful
Comment Report abuse

Stella CarrierTop Contributor: Writing
TOP 1000 REVIEWER
5.0 out of 5 stars Twists And…
Reviewed in the United States on June 3, 2020
Verified Purchase
Hung Season 3 is the type of tv show to watch if you watched the previous two seasons to fully understand what is going on. Some tv shows you can get away with not having watched previous seasons, however this is the tv show where plot sequences in season 3 make more sense if you watch the previous two seasons. Multiple elements that are introduced into this season: Ray’s competition, the business dynamics changing even further among the characters of Ray, Tanya, and Lenore. This season touches on topics that may be controversial for some tv viewers: a more than friends relationship dynamic between two employees of the same gender at the same company, sexual harassment, one episode where Ray finds out a customer is different than what he expected them to be, both of the pimps unexpectedly being drawn into unconventional relationship dynamics, and more. The only caveat is the way that the ending was written, I can guess why it was written the way it was, it was just that I was hoping for happier endings for a multiple number of the characters. Regardless, I obtained this tv show for a bargain for the entertainment and laughs that I got from watching it.
Read more
Helpful
Comment Report abuse

L. Gugliotti
5.0 out of 5 stars Can I please have a giant cuppa Thomas Jane?
Reviewed in the United States on August 24, 2015
Verified Purchase
Good God!!! this man is so hot as Ray Drecker. His performance was just so well done. He is such a likable character, with "morals" and a heart, and the rest of him is just so incredibly fine. Highly recommended. He is hilarious in so many scenes..... "Dance for me", and although the premise is crazy (beautiful women paying for sex; unrealistic dramatic situations) he just makes it work. These female actors who are just absolutely going to town with Ray in bed are very entertaining and funny. They are just letting it all out, and must have been exhausted at the end of these scenes. And my husband is so much happier since I have watched it.... LOL. Mr. Jane, I am going to send you a big box of cigars for your excellent performance.....
Read more
2 people found this helpful
Helpful
Comment Report abuse

T. Shipman
4.0 out of 5 stars I really enjoyed this series
Reviewed in the United States on February 22, 2016
Verified Purchase
I really enjoyed this series. It seems they were a little behind the curve. They should have opened the Wellness Center in season 2, it seems like it would be the natural progression of things. There were also a few wacky story lines that just didn't make much sense, just daft and out there. Tanya needs to be executed for her stupidity. If it wasn't for her, I would have gladly watched 10 seasons of this, she drove me crazy just about every time she opened her mouth. I really hope there aren't actual people like her in the world. I can't tell you how angry she made me with her incessant wretching and complaining about everything. The rest of it was fun. Good characters, mostly. Great, interesting, and fresh story. I really enjoyed Hung. Sad to see it canceled but I don't really see how it could have gone much further. Everything tied up nicely for the most part.
Read more
2 people found this helpful
Helpful
Comment Report abuse

Lilo
3.0 out of 5 stars Didn't think I would like this at first
Reviewed in the United States on October 4, 2016
Verified Purchase
Didn't think I would like this at first. It is a a great quirky comedy - with zany characters. I often laughed out loud because the situations were just so dumb and funny. Didn't think they were trying to make some sort of statement on society, the roles of male vs female. It was just a different take on the pimp-prostitute relationship - and how two beginners could bungle so much. It nice to watch a comedy sometimes, instead of sliced up bodies in lab dishes.
Read more
3 people found this helpful
Helpful
Comment Report abuse

MrBCaShopper
2.0 out of 5 stars Seasons 1 and 2 were great - quirky, funny, low-budget. Starting Season 3, the whole thing changed and was ruined.
Reviewed in the United States on March 18, 2016
Verified Purchase
Season 1 and 2 were great. Season 3 is completely different. The way they filmed it changed, the storyline stopped being funny. Too bad. It felt like season 1 and 2 was lower budget, more of a quirky indy series. Then it got attention, bigger budget, more producers, etc. and they totally ruined the show starting season 3. Great job HBO!
Read more
5 people found this helpful
Helpful
Comment Report abuse

Brittney I
4.0 out of 5 stars Thomas Jane to wonderful to watch
Reviewed in the United States on October 13, 2016
Verified Purchase
great show. the title got my attention but the show kept me watching... Thomas Jane is wonderful to watch and all of the other cast are great as well.. was very sad to see the last show and it left you hanging.... wish they would come back with a season 4 but it has been awhile and the odds of that happening are slim... great show to watch.... would have given it 5 stars if it would have ended the show better... but this way it keeps you guessing...
Read more
2 people found this helpful
Helpful
Comment Report abuse

Anne Heche is her wonderful best as a ignorant, vulnerable woman. Love her. It's nice to see her back on the screen!

When is the NEXT SEASON???

Amazon Customer
5.0 out of 5 stars Entertaining from start to finish
Reviewed in Canada on July 21, 2019
Verified Purchase
A great show. An overall escape from and a lot of fun!
Read more
Helpful
Sending feedback...
Thank you for your feedback.
Sorry, we failed to record your vote. Please try again
Report abuse

Byron Freeman
5.0 out of 5 stars IT GOT CANCELLED??
Reviewed in Canada on January 1, 2014
Verified Purchase
FUNNY,FUNNY AND ABOVE ALL FUNNY. WELL WORTH THE TIME AND MONEY TO VIEW. EVERY
DIRTY OLD MAN'S DREAM. IT IS A SHAME IT GOT SCRAPPED.
Read more
Helpful
Sending feedback...
Thank you for your feedback.
Sorry, we failed to record your vote. Please try again
Report abuse