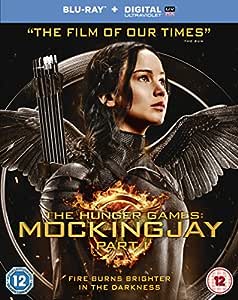 Add to Cart
$16.94
+ Free Shipping
Sold by: Amazon Global Store UK
Have one to sell?
Sell on Amazon

The worldwide phenomenon of The Hunger Games continues to set the world on fire with The Hunger Games: Mockingjay - Part 1, which finds Katniss Everdeen (Jennifer Lawrence) in District 13 after she literally shatters the games forever. Under the leadership of President Coin (Julianne Moore) and the advice of her trusted friends, Katniss spreads her wings as she fights to save Peeta (Josh Hutcherson) and a nation moved by her courage. The Hunger Games: Mockingjay - Part 1 is directed by Francis Lawrence from a screenplay by Danny Strong and Peter Craig and produced by Nina Jacobson's Color Force in tandem with producer Jon Kilik. The novel on which the film is based is the third in a trilogy written by Suzanne Collins that has over 65 million copies in print in the U.S. alone.

4.6 out of 5 stars
4.6 out of 5
272 global ratings
How are ratings calculated?
To calculate the overall star rating and percentage breakdown by star, we don’t use a simple average. Instead, our system considers things like how recent a review is and if the reviewer bought the item on Amazon. It also analyzes reviews to verify trustworthiness.
Top reviews

Clicker
3.0 out of 5 stars Should have been merged with Mockingjay Part 2!!!
Reviewed in the United Kingdom on November 22, 2015
Verified Purchase
There is no doubt that Jennifer Lawrence has made the part of Katniss her own. Her performance is stunning in all of the Hunger Game films. The only problem I have with this film (and so many others that are at the end of a series of books on which they are based), is that there is not enough content for 2 films. Mockingjay would have been far more enjoyable as just one film instead of 2. Maybe slightly longer than the average flick but who cares about that if the overall quality is better. There are only about 2 sequences which are worth seeing in this film, the rest is just setting the scene for part 2. Watch the film particularly if you have not read the book to set you up for the second part.
Read more
Report abuse

Metalmonster
5.0 out of 5 stars Great story, lots of action and great acting!
Reviewed in the United Kingdom on December 12, 2015
Verified Purchase
Let me start by saying that I have not read the books. For me this was a great action movie with a great script and fantastic acting. There was more action than I expected because I had read reviews from people saying not much happened in this movie.

This movie was a step up from the last movie in terms of story and acting and I cannot wait to see the final instalment. I just hope the last instalment is as good as this and not the disaster that the third Matrix film was!!!

Selina
4.0 out of 5 stars Good movie
Reviewed in the United Kingdom on April 9, 2016
Verified Purchase
I'm a massive hunger games fan having read and re-read the books a thousand times and watched the films. Like all book to film adaptations there are bits missing and bits added in but in this film I think it still flows well and gives the viewer everything they need to complete the hunger games journey. Will be watching the series from the start again and re-reading the books very soon.
Read more
Report abuse

Stuart Cutler
5.0 out of 5 stars Brilliant Quality Product and Flim!
Reviewed in the United Kingdom on July 12, 2015
Verified Purchase
This Product is very good and I received in cellophane hot off the production line!!

Having watched the first 2 films and read the first book I think that this series is brilliant and would recommend to anyone who likes SiFi or just want a great film to watch.

I would recommend this film and product to others!