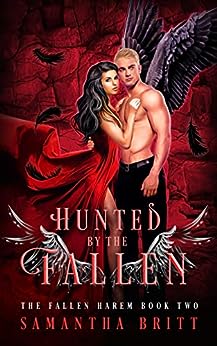 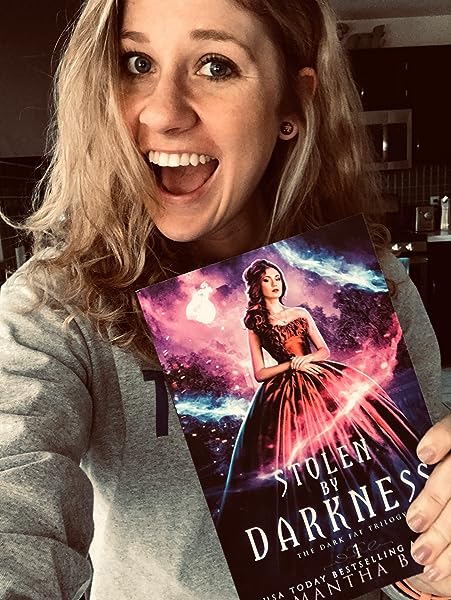 by Samantha Britt (Author) Format: Kindle Edition
Book 2 of 4: The Fallen Harem
See all formats and editions
Sorry, there was a problem loading this page. Try again.

Veronica’s parents are saved, the yancor demons are defeated, and her identity remains a secret. By all accounts, Veronica should be happy. But happiness is beyond her reach.

Bloodlust and vengeance plague Veronica’s waking thoughts. Mistrust and fear keep her up at night, and her Angel Fire refuses to do more than warm her hands on a chilly morning. Maybe the Dark and Light Council are right. Maybe Veronica is the abomination they fear her to be.

When a sorceress reveals what’s responsible for Veronica’s troubles, betrayal drives a wedge between her and the Fallen. She wants to keep her distance, but with each brush of power, her desire for them only grows.

Their connection is a ticking time bomb, and she is about to explode.

Hunted by the Fallen is book 2 of 5 in The Fallen Harem series.

Lifelong reader turned author, Samantha Britt enjoys reading and writing young adult and new adult fantasy and paranormal romance. Her favorite protagonists are young women in the middle of discovering just what they have to offer the world, often overcoming supernatural obstacles in the process.

Claimed by the Fallen

Hunted by the Fallen

Protected by the Fallen

Captured by the Fallen

CURSE OF THE DRAEKON TRILOGY - Completed

Allison F.Parkson
5.0 out of 5 stars I really love this series!
Reviewed in the United States on December 10, 2019
Verified Purchase
I've read the first 2 parts of this series. Very good!
I really enjoyeD. Britt's writing. I do wonder about Veronica's parents and friends. They seem to have disappeared.
Read more
Helpful
Report abuse

Wendi Wilson, Author
5.0 out of 5 stars Great continuation
Reviewed in the United States on March 22, 2019
Verified Purchase
The world building gets even better and more in depth in this second of the series. Veronica learns more about herself and the world of fallen angels, and we learn people may not always be what they seem.
Can't wait to dig into the next book!
Read more
Helpful
Report abuse

MonasZoo
3.0 out of 5 stars Fell short for me - coulnd't connect to main character and plot
Reviewed in the United States on January 10, 2019
Hunted by the Fallen is a book written by Samantha Britt. I have read a couple of books by this author, but I have to say this is my least favorite book of this author to date. I am not sure what it was, but I just didn't really get into this book at all. I felt that the book was missing a major plot line, it just kind of drifted around in the life of Veronica and her discovering on how to use her gifts now but really missed the mark on building up to a big finale in some way. The pace was a drifting around, so there weren't really any rush moments nor any dragging out moments, so that is good. I also found some editorial errors still and that just shouldn't happen in my opinion, not in the world of spell check and ARC readers.

Veronica was a rather one dimensional character in this book and I had a difficult time connecting to this character. She seemed to fail to grasp pretty much EVERYTHING, and given it is difficult when you are not told much, but maybe sometimes there is a good reason for that. She seemed rather immature for an 18 year old and I really hope that she grows up fast in the books to come. Even with what she experiences in the book she doesn't seem to really grow much, which is surprising to me and I also didn't find a whole lot of character development.

Sadly I found this book fell flat for me. Mostly because I just didn't find a plot to connect to and the main character just was too one dimensional with no character to talk about. Give me a strong female character any day, but Veronica just was far from it and from what I read so far I am not sure she will. I hope I am wrong though.
Read more
One person found this helpful
Helpful
Report abuse

Linda Romer
4.0 out of 5 stars An enjoyable read!
Reviewed in the United States on December 17, 2018
I enjoyed reading Hunted by the Fallen Book 2. The story takes off where book 1 ended. I'm enjoying A Fallen Angel Reverse Harem Series. A good story with lots of angst for Veronica and her Fallen Angels. I like the direction in which the story is headed and am looking forward to continuing with the series. With Veronica coming into her powers and learning more about herself the story is becoming more interesting. I loved the part where Veronica confronts her High School Bully. I also enjoyed the ending and can't wait to see what happens in book 3 Protected by the Fallen.

I give Hunted by the Fallen 4 stars for its Angelic read.
I would recommend this book to YA Paranormal/Fantasy Fans.
Read more
One person found this helpful
Helpful
Report abuse

AnneMarie
5.0 out of 5 stars Great story
Reviewed in the United States on December 15, 2018
Absolutely loved it!
We learn more about Veronica and her Fallen Angel Reverse Harem...
Veronica's parents have been saved by she is still upset...
Her 4 supposed soulmates are surprised at what happened during the yancor demon attack and try vigilantly to get her angel powers to come out...but her angel fire just won't work...
But surprise, surprise in walks another fallen angel and demands her help...
Will she help him? You will have to read the book to find out!
Great second book and I can't wait until March 2019 for the 3rd installment...
Read more
One person found this helpful
Helpful
Report abuse

Lisa Lee
5.0 out of 5 stars Loved it!!
Reviewed in the United States on January 3, 2019
I couldn't put it down! The story between Ron and both the Fallen is a roller coaster. It's complicated but epic. Life changing and it's amazing how Ron grows as well as how each person involved in her journey changes as well. Loved it! The story gets better and better! Love the intensity! The chemistry is fantastic! The cliff hanger - wow! Can't wait for the third book! #mustread
Read more
Helpful
Report abuse

sassy lashes
5.0 out of 5 stars Such a Great Series
Reviewed in the United States on December 15, 2018
I cannot get enough of this series, and I am so glad there will be many more books to come. Veronica went in a direction I was not expecting in this one. She formed new allies, learned more about her powers and finally uncovered some major truths. And that ending. I cannot wait for the next one to see how this all plays out.

***I voluntarily reviewed an ARC of this book.***
Read more
Helpful
Report abuse

Dmarie4near
5.0 out of 5 stars This is better than a roller coaster.
Reviewed in the United States on December 28, 2018
This story just twists and turns and the reader will never know quite what to expect. There are so many different possibilities in the next books as to where this is going. Veronica is torn between 4 hunks and her crush from school. They are all perfect in their own ways and yet she is so torn. Throw in Lucas and his hold over her, her best friend that is feeling left out and there is enough tension and intrigue to keep everyone's heart beating fast.
Read more
Helpful
Report abuse
See all reviews