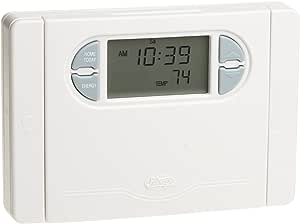 Brand: Hunter Fan Company
3.5 out of 5 stars 163 ratings
Currently unavailable.
We don't know when or if this item will be back in stock.

3.5 out of 5 stars
3.5 out of 5
163 global ratings
How are ratings calculated?
To calculate the overall star rating and percentage breakdown by star, we don’t use a simple average. Instead, our system considers things like how recent a review is and if the reviewer bought the item on Amazon. It also analyzes reviews to verify trustworthiness.
Top reviews

Flyinlow
5.0 out of 5 stars Easy to install, easy to use, very nice thermostat
Reviewed in the United States on April 11, 2014
Verified Purchase
This is my 2nd Hunter thermostat. The last one went with the house when we moved out. I love the indiglo lighted display on this one. The "Home Today" button is a convenient way to adjust the thermostat on days when you are home and don't want the temperature adjusting. I am not a fan of the Honeywell thermostats and their 1 degree of accuracy that forces your furnace/AC to run more frequently. This thermostat is "smart" too in that it monitors how long it takes for the temp to catch up, and it comes on accordingly. I love how it is quick-detachable so you can set it sitting in the easy chair instead of standing at the wall to set it. Overall, Hunter makes great thermostats and they should be more mainstream. A hidden gem. It easily saves more than it costs in just a few months in my experience. My last Hunter saved us a small fortune over the regular non-programable thermostat we had.
Read more
5 people found this helpful
Helpful
Comment Report abuse

Julia James
4.0 out of 5 stars Perfect balance of customizable and easy to use. Mostly.
Reviewed in the United States on February 6, 2010
Verified Purchase
My boyfriend salvaged a Hunter 44550 from a property he was renovating. It sat around in his warehouse for a few years, and then got installed at home. Since it was just what happened to be on hand, I didn't really think about whether or not I liked its features. Until it gave up the ghost after about two months. Hard to know whether it quit prematurely or not, since I don't know anything about its life prior to the few years it sat in the warehouse.

Anyway, the contractor/electrician who'd done work on my house when I first bought it had recommended going with a Honeywell, so when I started researching to buy a new programmable thermostat, I was sure that's what I wanted. I hesitated after seeing the prices and the reviews, though, and so started looking further into the features of the various options.

This Hunter 44550 can do seven different programs, or just be used as a 5-2. It's waaaay cheaper than the Honeywell 7-days. I really only need 5-2, but like the flexibility should I need it in the future. It's very easy to program initially, whether you're doing it as a seven-day or as a 5-2, at least with the help of the cheat sheet printed right on the inside of the cover. I did need to refer to the manual to figure out how to do a permanent hold, but it's not complicated (hold the "Hold" button for a long time).

I think the thing that really sold me on getting this one again is the "Home Today" button. Hit it either during the wake-up interval or during the day, and thermostat is set to whatever you normally have it at when you're home. No manually setting it before the second interval starts, then realizing that it's freaking cold because the program took over at 8 o'clock anyway, or setting it and holding, then realizing in the middle of the night that the temperature never lowered again because you forgot to release the hold.

This does sort of have an energy usage function -- it'll tell you how many hours in the current day, previous day, current week, and previous week the heat has been on. I haven't used this feature except to glance at it out of curiosity every so often. I have radiators, so I've never looked into whether or not it has a filter-change reminder, and I don't have AC, so I've never used it for that.

It also has an auto-recovery function (though it can be turned off via a switch on the back). It's not clear to me if the thermostat "learns" how long it's going to take to get the house up to the desired temp at the right time, or if it just starts at some pre-set interval before the programmed time, but it does a pretty good job, although when it's very cold it doesn't always make it all the way. I may adjust back by 20 minutes or so to make up for it. (As a side note, this thing does only ten-minute increments, which is fine with me; hard to imagine that I'd ever need it to be set to the minute, and it makes scrolling through the time options much faster.)

It's pretty easy to install, as it's of the style with a plate that gets screwed on first, then the thermostat itself snaps onto that. It requires a small screwdriver, but not so small that a reasonably well-equipped homeowner wouldn't have one on hand. There are several contractor options that can be selected only via switches in the back of the thermostat (only accessible if it's removed from the wall), including increment (standard is -1/+1, alt is -1/+2), 12 hour or 24 hour time, and some others that I couldn't imagine using and so don't remember. There's also something on the back that has to be done if you're using it with a single-stage heat pump, but I don't really know what that's all about. I assume it means you can use it with a single-stage heat pump. :-)

All in all, I'm very happy with this thermostat, but I'm hesitant to recommend it without reservation since the first one I had died. That said, I'm inclined to believe that it was not indicative of the general quality of the product, so for its ease-of-use, *very* favorable price, and excellent functionality, it gets four stars.

Robert Bruce
4.0 out of 5 stars Inexpensive, relatively easy to use
Reviewed in the United States on March 15, 2013
Verified Purchase
This replaces existing thermostat with little trouble. Installation instructions are no more difficult to follow than any other thermostat.

It is pre-programmed for "Energy Star" setbacks, so if you're home in the day you'll definitely need to change that. The default setbacks are pretty "aggressive", and nighttime A/C setback can let it get really warm for sleeping. I had to change that one.

Programming is not too hard. Quick reference inside front panel. You can change multiple days at once if you use weekday/weekend schedule. You don't have to change Monday through Friday individually. Keep the book handy if you want to use this feature, it's not as obvious as the others.

It is a true 7-day thermostat. If your work/school schedule isn't the typical 8-5 M-F, you can change everything you need to fit any (regular) schedule.

Auto-recovery starts heating or cooling in advance of the temperature change. It doesn't learn, but it works pretty well.

The "Home" button is nice if you get home early one day and it's still in the daytime setback. One press puts it in the warmest/coolest setting in the schedule. Again, use that "Home" button for exceptions and save yourself some trouble.

It's a good value, don't be put off by the "Hunter" brand on a thermostat.
Read more
One person found this helpful
Helpful
Comment Report abuse
See all reviews
Pages with related products. See and discover other items: home energy monitor