You've subscribed to Victim! We will preorder your items within 24 hours of when they become available. When new books are released, we'll charge your default payment method for the lowest price available during the pre-order period.
Update your device or payment method, cancel individual pre-orders or your subscription at
Your Memberships & Subscriptions
There was an error. We were unable to process your subscription due to an error. Please refresh and try again. 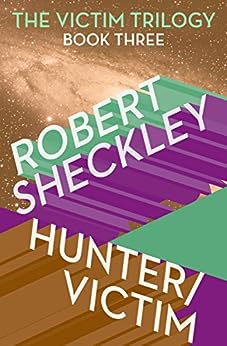 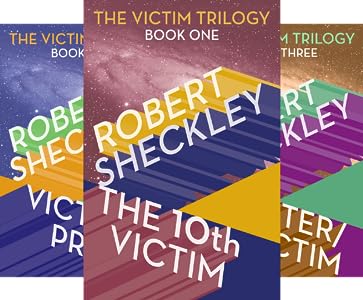 “The key words with Sheckley are clever, deadly, cool . . . I don’t know anyone else in SF who has written quite so many classic stories.” —Spider Robinson
--This text refers to an alternate kindle_edition edition.

Charles van Buren
TOP 500 REVIEWER
5.0 out of 5 stars A novel of dry wit, suspense, action and satire
Reviewed in the United States on July 20, 2017
Verified Purchase
The product details in the Amazon listing show this to be 5 pages in length. That is incorrect, this is a novel first published, I believe, in 1987.

This well written, entertaining novel is a tongue-in-cheek tale full of dry wit, satire, word play and sardonic observations about people and institutions. If you grow tired of the tart observations concerning big business and other things frequently associated with what is often known as the right in American politics, persevere. Mr. Sheckley is soon goring sacred cows usually associated with what is considered to be the American left. In addition, this is an excellent suspense novel with a touch of romance. Romance twisted by Mr. Sheckley's quick and strange wit.

This novel is part of the same universe as VICTIM PRIME, THE 10th VICTIM and the short story SEVENTH VICTIM. Mr. Sheckley expanded Seventh Victim into the novel The 10th Victim after the release of the 1960's Italian movie of the same title which was directed by Elio Petri and starred Marcello Mastroianni and Ursula Andress.
Read more
2 people found this helpful
Helpful
Report abuse

Kindle Customer
5.0 out of 5 stars Loved it!
Reviewed in the United States on January 13, 2017
Verified Purchase
This is the third book in a book series about the Hunt (Hunting people). The first book ‘The 10th Victim’ was made a movie in 1965, I think. The second book is ‘Victim Prime’.

This book is about a period in the Hunt where the rules are as not clear cut as in the other 2 books. But in this book the Hunt is very close to becoming legal. Which it is, in the first and second book.

1) Once a Hunter starts a Hunt he or she drops out of regular living until the Hunt is completed to the end.
2) The Hunters organization will train a Hunter in the necessary skills needed for a Hunt.
3) If you decide that you can’t be a Hunter anymore and don’t complete your kill, well you will very probably have a very nasty ‘accident’.
4) The Hunter is provided with it’s Victim dossier. In some special cases, the Hunters organization also helps financially and operationally the Hunter through the Hunt, without doing the final deed.
5) The Victim is traditionally just notified that a Hunter is after it. This too is not done in some special cases.
6) Now the Hunters organization wants to become legal. So it’s expanding its operations due to ‘humanitarian’ reasons. (You know, all those, terrorist, mass murderers, illegal arms dealers and so on that society needs to be disappear but can’t be touched by legal means.). Maybe the government will see that this organization is doing good, not just killing for fun and profit.

Now imagine that you are just a regular guy in a little vacation with your wife. A terrorist attack occurs and you wife is killed. Even though the terrorists that did the attack are killed, you know that people that give the orders for these attacks to happen are very much alive.
Now imagine that you are approached with the chance to become a Hunter, and Hunt the people that are connected to things like the terrorist attack. Remember that the ‘Victims’ are very nasty characters connected to all sort of shady and evil deals so them are used to people trying to erase them, oh boy!

NOTE: In the other two books the rules of the Hunt are very close to the following …

1) The Hunt is open to anyone eighteen years of age or older, regardless of race, religion, or sex.
2) Once you join, you’re in for all ten Hunts, five as Victim, five as Hunter.
3) Hunters receive the name, address, and photo of their Victim.
4) Victims are only notified that a Hunter is after them.
5) All kills must be performed in person, i.e., by the Hunter or Victim himself, no proxies.
6) There are severe penalties for killing the wrong person.
7) A Tens winner is awarded almost unlimited civil, financial, political and sexual rights.
Read more
One person found this helpful
Helpful
Report abuse

Keith G.
5.0 out of 5 stars Awesome Sci-fi Must read!!
Reviewed in the United States on December 1, 2015
Verified Purchase
Reading all of Sheckley's books now I liked it so much!
Read more
Helpful
Report abuse

PowerManG4
5.0 out of 5 stars If you can find it
Reviewed in the United States on February 22, 2000
I loved this book. A delecious sense of satire is peppered all the way through. THere is just a taste of malice beneath the surface to keep it edgy. The story of an average to sub-average man. (in mind anyhow) It tells his tale as he goes to make mmoney in a killing gtame where you are sometimes Hunter....sometimes Victim. Intriguing storyline and excellent delvelopment make this a must read
Read more
2 people found this helpful
Helpful
Report abuse
See all reviews