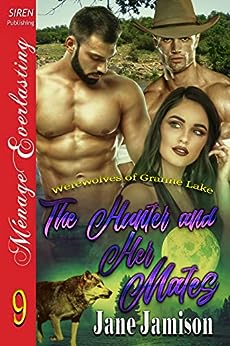 by Jane Jamison (Author) Format: Kindle Edition
Book 9 of 12: Werewolves of Granite Lake
See all formats and editions
Sorry, there was a problem loading this page. Try again.
[Siren Menage Everlasting: Contemporary, Menage, Paranormal, Werewolves/Shape-shifters, Western/Cowboys, MFM, HEA] Stevie Madsen is a hunter. Ranchers hire her to get rid of predators that attack their cattle. She’ll hunt anything as long as it’s on four legs. But men? They’re a different kind of animal. Should she shoot them? Or shag them? Werewolves, Riker Canton, and his best friend, Zane Joseph, are tired of having their cattle slaughtered. They’re certain the killers are not regular coyotes or wolves, but shifters. Yet they can’t seem to find the elusive predators. Instead, they find Stevie. Even in their wolf forms, they know she’s the one. But will she shoot them before they have a chance to tell her how they feel? She’s their mate, but she’s also a hunter. How can they love a woman who’s set on killing their kind? Still, when it becomes clear that the killers are not ordinary shifters, their mate becomes their number one priority. Can they keep her safe and still find the killers? Jane Jamison is a Siren-exclusive author.
Read more
Previous page
Next page

Next 4 for you in this series See full series
Total Price: $18.98
Books In This Series (12 Books)
Complete Series
Werewolves of Granite Lake
Kindle Edition
Page 1 of 1Start OverPage 1 of 1
Previous page
Next page

Jane Jamison has always liked “weird stuff” as her mother called it. From an early age she was fascinated with stories about werewolves, vampires, space, aliens and whatever was hiding in her bedroom closet. (To this day, she still swears she can hear growls and moans whenever the lights are out.)

Born under the sign of Scorpio meant Jane was destined to be very sensual. Some would say she was (and remains) down right sexual. Then one day she put her two favorite things together on paper and found her life’s true ambition: to be an erotica paranormal romance author.

Jane spends at least six days a week locked in her office surrounded by the characters she loves. Every day a new character will knock on the door of her imagination. Her plans include taking care of her loving husband, traveling, and writing until her fingers fall off.