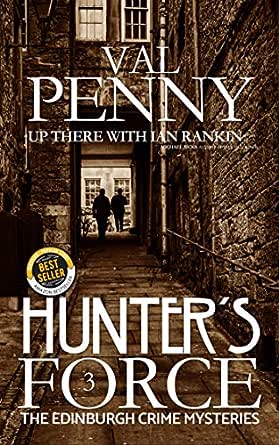 You've subscribed to The Edinburgh Crime Mysteries! We will preorder your items within 24 hours of when they become available. When new books are released, we'll charge your default payment method for the lowest price available during the pre-order period.
Update your device or payment method, cancel individual pre-orders or your subscription at
Your Memberships & Subscriptions
There was an error. We were unable to process your subscription due to an error. Please refresh and try again. 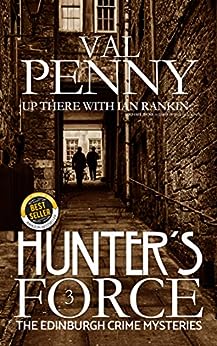 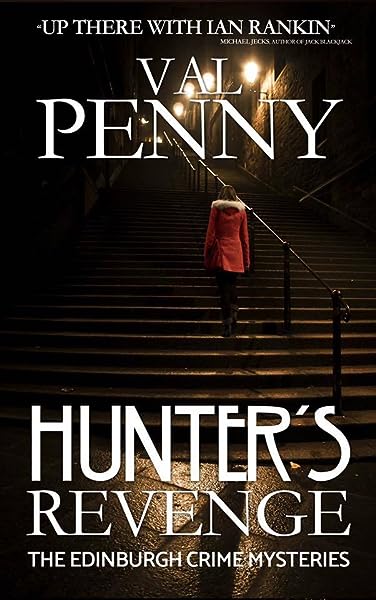 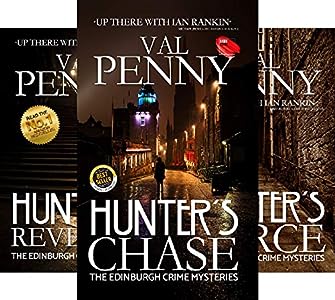 3.9 out of 5 stars
3.9 out of 5
100 global ratings
How are ratings calculated?
To calculate the overall star rating and percentage breakdown by star, we don’t use a simple average. Instead, our system considers things like how recent a review is and if the reviewer bought the item on Amazon. It also analyzes reviews to verify trustworthiness.
Top reviews

Veronica
5.0 out of 5 stars A suspenseful tale filled with mystery and intrigue...
Reviewed in the United States on March 25, 2019
Verified Purchase
Murder and revenge are making the streets of Edinburgh a very unsafe place to be. Author Val Penny takes us on a thrill filled story of crime and deceit with Detective Inspector Hunter Wilson. A panicked call in the early morning hours leads him to a horrible scene. A young woman has been murdered, disfigured beyond recognition. The unimaginable has happened--his son Cameron is a key suspect, and the dead woman shares his apartment. No one knows her background, or how she came to be Cameron's roommate.

A complex web of dark intrigue and seedy business transactions are revealed as Hunter and his team work around the clock to see who and what is behind this grisly murder. Suspects are plentiful as the secrets are uncovered, and revenge is running rampant, including a deviant few who want Hunter silenced, permanently.

I truly enjoyed this suspense filled read. As a lover of mystery series, I am so looking forward to reading the first two books in the series; Hunter's Chase #1, and Hunter's Revenge #2. A great mystery with engaging characters, highly recommended!
Read more
5 people found this helpful
Helpful
Report abuse

viviennevinyl
2.0 out of 5 stars Most Abrupt Ending Ever
Reviewed in the United States on July 28, 2020
Verified Purchase
This has the elements of a decent mystery, but the characters are flat and cliche (Russian criminals, buffoon goons) but the weirdest thing is the ending - all of a sudden the book ends, mystery solved, fait accompli, without any preamble, plus it doesn't even make sense (how did they figure this out? Too many unexplained, dangling questions). For those reasons, I really can not recommend this book.
Read more
2 people found this helpful
Helpful
Report abuse

Denys Kisch-Walters
4.0 out of 5 stars Very enjoyable, good plot and characters if a bit long-winded in places.
Reviewed in the United States on January 29, 2021
Verified Purchase
Liked: The plot, the characters and the settings. Well thought out and written.
Not keen on: Often padded with too many minuscule details and several obvious parts where proof-reading had missed. Also some unnecessary Americanisms given time and place.
Read more
Helpful
Report abuse

Lisa
5.0 out of 5 stars Another great mystery
Reviewed in the United States on March 19, 2019
Verified Purchase
What fun to catch up with familiar characters, both good and evil. The colors of Edinburgh and international intrigue make this a wonderful read.
Read more
2 people found this helpful
Helpful
Report abuse

DI Hunter Wilson is back.I love his ever growing character development. The intermingling of personal relationships with the case make him an even more compelling character. I love the cohesiveness of the team he leads and I love how in tune he is as a Detective.

Per usual, this case is complex and twisty. I loved every minute of it. It’s the kind of book you want to keep reading. It’s realistic, entertaining and there’s bits of humor sprinkled in to break up some of the seriousness, which I always enjoy.

If you’re looking for a good crime novel, look no further. This series is fantastic and with each book, it gets stronger. Highly recommended.

*I received a complimentary copy of this book as part of a blog tour with Rachel's Random Resources. All opinions are my own.*
Read more
2 people found this helpful
Helpful
Report abuse

EILEEN
4.0 out of 5 stars ENGROSSING PERPLEXING MYSTERY
Reviewed in the United States on February 8, 2021
HUNTER'S FORCE, The gripping third book in the Edinburgh Crime Mysteries Series immediately becomes immersed in a monstrous, frightening discovery, touching someone close to the team. Navigating to the solution of this horrendous, baffling mystery is like a dire, hair-raising race on a track resembling a web of back streets interspersed with entanglements, complications, heart-stopping incidents and dead ends culminating in a blindsiding finish!

Ginger Book Geek
5.0 out of 5 stars A fantastic read
Reviewed in the United Kingdom on November 1, 2019
Verified Purchase
I absolutely love to discover new authors and Val Penny is a new author for me- well sort of. I say sort of because I have heard of Val Penny and I have all three of her books but I haven't read one before.....until now that is. When I was invited to take part in the blog your for 'Hunter's Force', I accepted the invite thinking that it would be the ideal opportunity to acquaint myself with her work. Now I have read, 'Hunter's Force' I am actually cross at myself for leaving it this long to read one of her books. I absolutely and totally loved reading 'Hunter's Force' but more about that in a bit.
What can I say about Detective Inspector Hunter Wilson? He is a police officer of many years experience. He has a sort of complicated personal life. His son has recently left rehab and the son is currently working as a driver for a shady sort of character. His boss has also allowed him to live in a flat that he owns. Hunter's son returns from a night out and discovers a body of a girl who had been staying there. When Hunter gets the call to reporting the discovery, he clicks into professional mode but at the same time he can't help but be a concerned parent. Hunter sounds likes the kind of person I would like to work for. He is firm but fair, he takes his equal share of the workload and he leads a small team who all seem pretty loyal to him as he is to them. When he is assigned a case, you can rest assured that he will fully investigate the matter until he has apprehended the villain and when he has investigate every single piece of evidence.
Oh my word, I was simply blown away by how good 'Hunter's Force' was. As soon as I started to read, I just knew that I wouldn't be able to put this book down even if I had wanted to. The book wasn't exactly glued to my hand but it might as well have been because it travelled everywhere with me. I didn't want to miss a single second of the story. I had taken to the different characters so well and I was so intrigued by the case that I just couldn't stop reading. The pages turned increasingly quickly as my desperation to find out how the case concluded steadily grew and grew. I reached the end of the book far quicker than I had intended, which I was disappointed about. I was enjoying the storylines, the characters and the author's writing style so much that I just wish the book had lasted far longer than it did. I soon cheered up when I realised that I had the first two books in the series to read.
'Hunter's Force' is brilliantly written. As I indicated before had I known how great a writer Val Penny was, I would have read her books far sooner than now. She certainly knows how to grab your attention and draw you into the story from the start. Once she had my attention, she reeled me in as it were. Val writes so realistically and uses such vivid descriptions that I felt as though I was part of the story myself and an extra member of Hunter's team.
Reading 'Hunter's Force' felt like being on an at times scary and unpredictable rollercoaster ride with several twists and turns along the way. There were certain descriptions of the injuries and the criminal acts that made me wince and feel rather sore.
In short, I thoroughly enjoyed 'Hunter's Force' and I would definitely recommend this book to other readers. I can't wait to read what Val Penny comes up with next. Here's hoping that we don't have too long to wait, but whilst I wait I will definitely be reading the first two books in the series. The score on the Ginger Book Geek board is a very well deserved 5* out of 5*.
Read more
One person found this helpful
Report abuse

Ashley Meggitt
5.0 out of 5 stars A well told, well paced, crime novel.
Reviewed in the United Kingdom on December 27, 2020
Verified Purchase
A well-paced crime novel, pulling together an interesting and diverse set of characters. The opening murder scene sets the story up extremely well and the ensuing multithreaded narratives snake their way through the story pulling us along with them. Murder and revenge and shady business dealings are mixed together to create this tale of criminality yet touches of humour sprinkle the narrative to give flashes of light in the dark story scape. I haven’t read the earlier books in the series but that didn’t matter. The story stands up well on its own. However, I will back track and read the others before I take on the next one in the series. This is a well told and rich story - excellent work Val Penny.
Read more
Report abuse

Katy J
5.0 out of 5 stars A compulsive read
Reviewed in the United Kingdom on March 3, 2019
Verified Purchase
I devoured it in one sitting. DI Hunter Wilson and a cast of characters that will be familiar to those who are already fans of the series - as well as some fascinating new ones - appear in this complex, gritty and engrossing tale. Val Penny deals with the shocking issue of human trafficking, yet weaves magnificent warmth and humour into her story. I can’t wait for the next one
Read more
Report abuse

AnnaRaindrop
5.0 out of 5 stars An absolute must read!!
Reviewed in the United Kingdom on March 26, 2019
Verified Purchase
This is the third in the series of books by Val Penny. All cannot be put down - even reading at 2am!! I devoured this book very quickly. Once again, exceptionally well written and you can actually imagine yourself as being part of the story. I cannot wait until - hopefully - the fourth book comes out :)
Read more
Report abuse

EH
2.0 out of 5 stars Just didn’t work for me
Reviewed in the United Kingdom on April 18, 2021
Verified Purchase
Too many characters, most 2-dimensional. Just not for me. This book was a freebie - but I wouldn’t bother ordering even if the next one were free. Sorry.
Read more
Report abuse
See all reviews