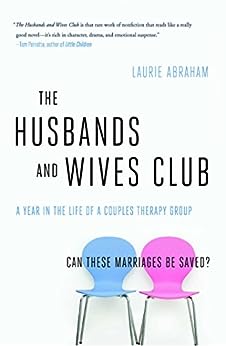 The Husbands and Wives Club: A Year in the Life of a Couples Therapy Group Kindle Edition

by Laurie Abraham (Author) Format: Kindle Edition
See all formats and editions
Sorry, there was a problem loading this page. Try again.
A PAGE-TURNING GLIMPSE INTO FIVE MARRIAGES AND THE FIGHT TO SAVE THEM

For more than a year, journalist Laurie Abraham sat in with five troubled couples as they underwent the searing process of group marriage therapy. Published as The New York Times Magazine’s cover story "Can This Marriage Be Saved?" the resulting article generated intense reader response and received the Award for Excellence in Journalism from the American Psychoanalytic Association. Though the article allowed Abraham to focus on only one couple, this book, which grew out of it and the reaction it inspired, tells the moving, fascinating story of all five.

The couples: Can Leigh and Aaron find the intimacy their marriage lacks; will Bella and Joe resolve the imbalance of power that threatens to topple their marriage; are Sue Ellen and Mark as ideal as they seem; what happened to Rachael that Michael cannot acknowledge; and do Marie and Clem, with the help of therapist Judith Coché, come back from the brink of divorce?

With the dexterity of a novelist, Abraham recounts the travails, triumphs, and reversals that beset the five couples. They work with their therapist—and each other—to find out whether they can rediscover the satisfaction in marriage that they once had. At times wrenching, at times inspiring, the sessions bring out the long-hidden resentments, misunderstandings, unmet desires, and unspoken needs that bedevil any imperiled couple. At the same time, these encounters provide road maps to reconciliation and revival that can be used by anyone in a relationship. Along the way, the author draws on her explorations of literature and

Freudian theory, modern science, and today’s cutting-edge research to decode the patterns and habits that suggest whether a troubled marriage will survive or die. Both an important look at the state of marital dysfunction and a reaffirmation of the enduring bonds of love, The Husbands and Wives Club is an extraordinary year in the life of the American marriage.
Read more
Previous page
Next page

“Startling in its depiction of the knotty complexity of relationships.” —The Washington Post

“Abraham bandies about a dizzying assortment of competing therapeutic philosophers and distills their approaches with aplomb.” —The New York Times Book Review

Laurie Abraham is a freelance writer, senior editor of Elle magazine, and the author of Mama Might Be Better Off Dead: The Failure of Health Care in Urban America. Formerly the executive editor of Elle, she has written for New York magazine, the New York Times, Mother Jones, and many other publications. Her work is also included in Best American Essays 2006, as well as the original collections The Bitch in the House, Maybe Baby, and The Secret Currency of Love. Laurie has bachelor's and master's degrees in journalism from Northwestern University and a master's in law from Yale University.

Laural Merlington is an audiobook narrator with over two hundred titles to her credit and a winner of multiple Earphones Awards. An Audie Award nominee, she has also directed over one hundred audiobooks. She has performed and directed for thirty years in theaters throughout the country. In addition to her extensive theater and voice-over work, she teaches college in her home state of Michigan.

No can ever know the inside of a marriage except the couple involved--until Laural Merlington dramatized this book. Journalist Laurie Abraham became the proverbial fly-on-the-wall as she observed five couples struggling to improve their relationships over a year of group therapy with therapist Judith Coch. Merlington projects authority as she recounts research, theories, and statistics; distinguishes all 11 characters; and delivers the connective narrative with an energetic flow. But it's the raw vulnerability of the couples' in-session vignettes that is most poignant. Merlington portrays scenes of long-hidden childhood hurts and marital resentments, awkward attempts to right power struggles, and angry needs for intimacy. Intense and brutally honest revelations about sex, love, and money are sometimes uncomfortable and upsetting, sometimes inspiring and uplifting, always illuminating. S.W. © AudioFile 2010, Portland, Maine --This text refers to an out of print or unavailable edition of this title.
Read more

Delaney Faulk
5.0 out of 5 stars If you are married, this is the only book you'll ever need
Reviewed in the United States 🇺🇸 on March 27, 2010
Verified Purchase
Most of us married folks have friends and shrinks - but not a shrink-friend who will tell you what really goes on in marriage therapy. Questions like: it is worth it? Is it mortifying being in group? How much is revealed that you might want to take back; and ultimately: does marriage therapy work and why? This is exactly what Abraham delves into in this book. She's a trained journalist with twenty years experience; a wife and mother; and a graduate of Yale Law School. In other words, a sharp writer who wants to get to the bottom of this murky topic both for herself and her readers.

If your marriage has been thru ups and downs - and come on, who's hasn't - this is a really useful book. Buy it. You will learn something and so will your spouse.

A. Sanchez
1.0 out of 5 stars Dear god this book was b.o.r.i.n.g
Reviewed in the United States 🇺🇸 on April 3, 2010
Verified Purchase
Normally I tear through these within a few days, but this one took me nearly a month. I've read alot of books of this genre, but this one seemed the most scatter brained by far. I'm not sure which part irked me the most: the fact that the therapist leads her clients to blame everything that is currently bad about their lives/marriages on their parents despite the fact that they themselves are well into their middle age or the style of constantly jumping between couples at every turn that it was hard to keep their stories straight or the complete lack of tangible conclusions and general observations to tie everything together. Too much awful to choose from. If you want to read stories about grown men crying because their dad "screamed" at them for crashing the family car instead of falling to his knees out of concern for his beloved son and how this episode is the reason he can't be emotionally available to his wife, then this is the book for you.
Read more
6 people found this helpful
Helpful
Report abuse

J. Litman
5.0 out of 5 stars Fascinating and a great read
Reviewed in the United States 🇺🇸 on April 14, 2010
Verified Purchase
The book succeeds on many levels -- as a close critique of couples therapy (both theory and practice); as a study of gender roles in marriage; and as a pretty riveting narrative of several individual couples. Above all, Abraham brings fine-grained observations and clean prose to a subject that often suffers from jargon-heavy and turgid writing. Highly recommended, even for readers (like me) who generally avoid these sorts of books.
Read more
5 people found this helpful
Helpful
Report abuse

Crystal Foster
5.0 out of 5 stars TRUE TALENT
Reviewed in the United States 🇺🇸 on June 13, 2010
Verified Purchase
This album is super dope! i absolutely love it! im not just saying this because ive known you for 7 years either. i think i need to buy a back up one cuz i think im playing it so much its gonna start skipping. you are a true artist and you have a great gift! keep it up Trini!!!!! -bless
Read more
Helpful
Report abuse

Pasiphae
3.0 out of 5 stars Six couples, a year in therapy, and a whole lotta theory
Reviewed in the United States 🇺🇸 on April 1, 2010
Vine Customer Review of Free Product( What's this? )
I thought this might be a juicy book about the hidden parts of marriages that are usually guarded closely by a couple until they decide to divorce. Then and only then do we find out the truth; the affairs, the incompatibilities, the deep resentments that chip away at a marriage are finally brought out in the open. But this book really isn't like that at all. It's a careful study of a group of couples with somewhat everyday troubles, and a detailed record of what it felt like to be in the room while they worked on those troubles. Between these chapters are long, informative chapters about therapeutic approaches, theories, practitioners, studies. I have a hunch that other readers might skim these parts, but I found the theory chapters much more interesting than the couples chapters. The author is passionately interested in this subject and brings a vast amount of knowledge and research to bear on her group.

The trouble for me is that the people being considered this minutely don't hold my attention. It goes like this: What the therapist said. What the husband said. What the therapist said. What the wife said. What someone else in the group said. Occasionally, the woman writing the book inserts what she thought or felt or said. The couples parts of the book are simply the back and forth of therapy. It is something like the first season of "In Treatment," without the masterfully crafted dialog. I thought the conflict between a determined career woman and her angry, less successful husband was sad, but a little easy to predict. The conflict between an emotionally manipulative woman who resented her husband to the point of seething, and her hapless husband who hid a huge void of sexual longing under a mountain of passive aggression, well, this couple got old really, really fast. In truth, the only couple in the book that interested me deeply had a happy marriage. I found their personal histories, what brought them in, and how they interacted to be profoundly interesting.

I guess the book, like the group, is a mixed thing. If you are in the process of sorting through your own marital situation or healing from a divorce, I have a feeling this book would speak to you more than it spoke to me, so please keep that in mind when considering my reaction.
Read more
27 people found this helpful
Helpful
Report abuse
See all reviews