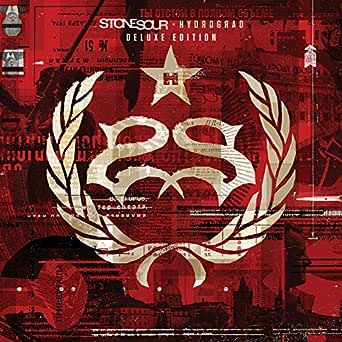 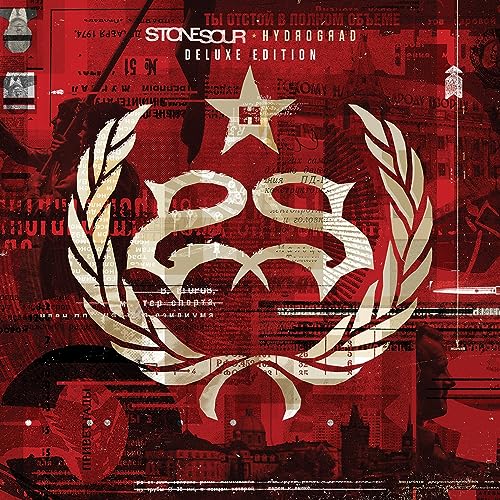 Listen Now
Buy MP3 Album $18.99
Your Amazon Music account is currently associated with a different marketplace. To enjoy Prime Music, go to Your Music Library and transfer your account to Amazon.com (US).

4.7 out of 5 stars
4.7 out of 5
572 global ratings
How are ratings calculated?
To calculate the overall star rating and percentage breakdown by star, we don’t use a simple average. Instead, our system considers things like how recent a review is and if the reviewer bought the item on Amazon. It also analyzes reviews to verify trustworthiness.

lifeispeachy
5.0 out of 5 stars Awesome album!
Reviewed in the United States on June 30, 2017
Verified Purchase
This album is great the last few albums had a few songs I didn't care for but every song on this record is very good. My favorites so far are Hydrogad, When The Fever Broke, Fabuless and Song #3. It's a pretty decent mix of melodic and heavy vocals that should leave any Stone Sour fan happy. Buy this record!
Read more
7 people found this helpful
Helpful
Comment Report abuse

dylan2k
5.0 out of 5 stars Corey Taylor=AMAZING!
Reviewed in the United States on October 4, 2017
Verified Purchase
Corey Taylor has done it again. The man can do anything and make it sound great. But he can do more than: go to his author's page and see the 5 books he's published. The man cannot be stopped. I saw him with Slipknot in Tampa and he did a 2.5 hour show, full-tilt, with a BROKEN NECK! As for this album it rocks in kind with the rest of their catalogue. Powerful, intelligent lyrics and energy to spare. Buy everything Corey is involved with. You will not be disappointed.
Read more
3 people found this helpful
Helpful
Comment Report abuse

S. Young
5.0 out of 5 stars Amazing again!
Reviewed in the United States on August 9, 2017
Verified Purchase
I was counting the days and minutes until I got this one in my hands. It was amazing and I am well on my way to wearing the cd out! Stone Sour has once again put out a disc that I enjoy listening to every track. I am hoping to catch them live finally this fall. Go get this one you will love it!
Read more
2 people found this helpful
Helpful
Comment Report abuse

Tom
5.0 out of 5 stars I like it
Reviewed in the United States on October 16, 2017
Verified Purchase
I love Stone sour, I love Slipknot, and I love Corey Taylor. I wouldn't say this is my favorite stone sour album, but no one can ever say all his stuff sounds the same. When you look up Rock Star in the dictionary, Corey Taylors picture comes up.
Read more
One person found this helpful
Helpful
Comment Report abuse

Kimberly Bornitz
5.0 out of 5 stars Great quality, amazing value
Reviewed in the United States on May 25, 2020
Verified Purchase
I really enjoyed this album by Stone Sour. The lyrics are well written, and the fifteen tracks on this CD does a good job of showcasing their talent. Thank you for making it available.
Read more
Helpful
Comment Report abuse

James Marschalk
3.0 out of 5 stars Could have been great but....
Reviewed in the United States on July 18, 2017
Verified Purchase
I have very mixed feelings when it comes to Stone Sour. It seems they have never really known what they want to be. Slipknot, the other band that Corey Taylor fronts, knows who and what they are. Heavy Metal. Sometimes SS seems to be want to be hard and then sometimes poppy radio friendly. I guess they have to attract the girls some. Come Whatever May in 2006, is a very good album and I think still easily their best. The album before that had maybe 3 good songs on it and Audio Secrecy is listenable but not anything great. I like House of Gold and Bones one but two I only liked 3 songs. Now to Hydrograd.
This album is saved by the last 5 songs on the disc. The intro is fine and then you have Taipai Person/Allah Tea. I don't know if the guys were siting around listening to the Scorpions but if you go back to the Love At First Sting album there is your start to this song (Coming Home). It takes about 3 minutes and then this song gets better but the chorus really kind of ruins it for me. Knievel Has Landed might be the best of the first 6 songs. There
are at least three songs on this effort that ooze Black Sabbath which is just fine and Hydrograd is the first of these but then SS does make it their own. Not crazy about the lyrics though. Then there is Song #3 for the teeny boppers I guess. This is another Say You'll Haunt Me but not nearly as good (not that Say You'll Haunt Me was all that but more originality) Fabuless is not even listenable for me. I skip it. Witness Trees o.k. Rose Red Violent Blue gets descent after a couple of minutes and the drumming and guitar lead is good. Thank God It's Over is a tune that has been done many times especially in the 80's but does have some descent lyrics and SS does make it their own. St Marie is a god awful song. Has to be the worst thing SS has ever recorded. After that things get really good. Mercy sounds a lot like a song I like from Picture Me Broken but this one is different enough and good also and has a killer change up and guitar solo. Whiplash Pants can stand up on any Stone Sour album and felt the most like a SS song on this album. Lyrically very good also. Friday Nights is very Black Sabbath and a good mix of SS style and again that is a good
thing. Somebody Stole My Eyes is my favorite on this album and crushes it ! Terrific song ! Top 5 SS song of all time for me. It's Motorhead meets Stone Sour :) When The Fever Broke is a softer ok ending to the album and hooks in well from the previous 4 rockers. Although there is some ok stuff in the first half, I could listen to the final 5 on this CD and never listen to the rest again. The final five saved it for me and made it worth buying.

John Gill
2.0 out of 5 stars The bland album
Reviewed in the United Kingdom on July 11, 2017
Verified Purchase
Following on from their career best double House of Gold & Bones albums comes new album Hydrograd...not a bad album but very bland. The songs are OK, some have bits taken from older SS song's but the noticeable bit is that they miss that umph that Stone Sour bring. Is it the lack of Jim Root? Who knows...let's hope for better in the future.
Read more
8 people found this helpful
Report abuse

mistymountainhop
5.0 out of 5 stars Brilliant album from a band at the top of their game.
Reviewed in the United Kingdom on July 13, 2017
Verified Purchase
Hello, you b**tards! From that hysterical opening on the (almost) instrumental 'YSIF', to the end of the closing 'When the fever broke', this is a fantastic album by a crazily tight band. First stumbled on SS when I caught 'Bother' off their debut and someone told me that was the same Corey Taylor from Slipknot. "No way!" says I, but it was and I've been hooked on SS since then, even if at the same time I'm not overly bothered about Slipknot.

The first 7 tracks of Hydrograd are outstanding, including the aforementioned 'YSIF'. From the pun titled 'Taipei Person/Allah Tea' through 'Knieval has landed' (musically a little bit Muse here?) into the excellent 'Hydrograd', the joyful 'Song #3', raging 'Fabuless' and, my favourite track, 'The Witness Trees' with its perfect closing solo.
'Rose red violent blue', one of the weaker tracks (for me) but still very good, is followed by the solid 'Thank God it's over' and then SS show everyone that they can get a bit Country on us with the very different 'St. Marie'. 'Mercy' is again excellent, 'Whiplash Pants' pretty brutal, 'Friday Knights' very good and the excellent 'Somebody stole my eyes' is both brutal and catchy at the same time. Album closer, 'When the fever breaks', is a suitably slow burner to finish with (Zepplin 'When the levee breaks'-influenced drum outtro?).

Musically, all the band are really 'on it' here. Outstanding drumming, great base lines and great guitars, with a number of great, punchy solos throughout the album. Is Jim Root really missed? I don't buy it, although maybe this effort is characterised by slightly more 'typical' melodies. Christian Martucci can sure as Hell play though and that's good enough for me.

Lyrics and vocals? Well, what can one say? Corey Taylor is a serious talent and he doesn't disappoint here. Lyrically brilliant again and vocally there can't be many better. To cap it all he's an incredible front man live, which is great if you're seeing SS on the supporting tour, as I am - can't wait.

Overall? Not been out of the car CD player or off various MP3 players since I bought it on release. If you like good, hard rock music with great lyrics, a bit of humour, great variety and top drawer musicianship, buy this and play it loud. You won't regret it.

It's all downhill from here...
Read more
6 people found this helpful
Report abuse

There are some proper stand out songs, Hydrograd itself is a definite neck-thumper and Fabuless really demonstrates the range that Corey Taylor all too typically delivers song after song now. My own personal favourite from this album is Somebody Stole My Eyes, which is a bit more thrashy and has a nice Star Wars reference thrown into the lyrics to boot.

It's not their best album. But it's still a solid 8/10.
Read more
One person found this helpful
Report abuse

Lumbago Whatever
4.0 out of 5 stars More I listen, the more I like it
Reviewed in the United Kingdom on July 12, 2017
Verified Purchase
The more I listen he more I like this album, hadn't heard o them and took a chance but got today I love the vocal interaction and the rough and at them Slipknot styling with the more melodic rock . All in all a good purchase for me..
Read more
One person found this helpful
Report abuse

Mr. A. A. S. Bowen
5.0 out of 5 stars Bought on a whim
Reviewed in the United Kingdom on April 29, 2020
Verified Purchase
Delivered promptly (many thanks) I seemed to have stopped listening to Stone Sour. Mistake!!! Awesome Corey Taylor project.
Read more
Report abuse
See all reviews