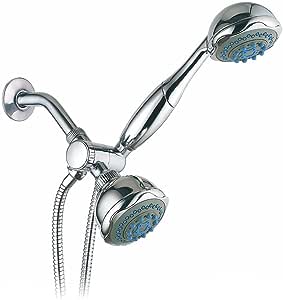 Save with Used - Very Good
$17.21
FREE delivery: Sunday, April 25 on orders over $25.00 shipped by Amazon.
Ships from: Amazon
Sold by: Amazon Warehouse

Brand: Hydroluxe
4.3 out of 5 stars 1,021 ratings
Amazon's Choice highlights highly rated, well-priced products available to ship immediately.
Amazon's Choice in Bathtub & Shower Systems by Hydroluxe
Available at a lower price from other sellers that may not offer free Prime shipping.

• Tools-free Installation. Connects in minutes to any standard overhead shower arm, no tools required
• Lifetime Limited Warranty is provided by Interlink Products International, Inc. This warranty is void if the product has been purchased from an unauthorized distributor.

4.3 out of 5 stars
4.3 out of 5
1,021 global ratings
How are ratings calculated?
To calculate the overall star rating and percentage breakdown by star, we don’t use a simple average. Instead, our system considers things like how recent a review is and if the reviewer bought the item on Amazon. It also analyzes reviews to verify trustworthiness.

erwinandfire
5.0 out of 5 stars EXCELLENT for the price!
Reviewed in the United States on January 8, 2015
Verified Purchase
ill start by saying I'm sure there are better dual shower heads out there--but NOT at this price. It is not chrome, and the pieces are fairly light. But they work perfectly!

Not sure what happened to previous buyers, but there were clear instructions included in my package. If anyone breaks the product upon installation, it's likely due to over tightening. The water pressure is great! Though, per the options laid out in the instructions, I did take out the water pressure regulators in each head--because 'MERICA.

Excellent shower head for the price. We use this in our master bath.

Update 8/15/17 - STILL works great. In fact, just bought another for the guest bath which was just as easy to install and functions properly. Love this thing.
Read more
54 people found this helpful
Helpful
Report abuse

themak
4.0 out of 5 stars For the price, this cannot be beat.
Reviewed in the United States on January 25, 2015
Verified Purchase
I purchased this unit after my 5-Way $20 hand shower fell and busted to pieces. Long review, TL;DR at bottom.

First impressions: This comes shipped in a plain brown box, so while I do not think a shower head is ever a good gift to give someone (as the seller is trying to promote) do be aware that this is a plain brown package, no logos, nothing. You get the hand shower, shower head, diverter unit, hose, washers, plumbing tape and an Anti-swivel Nut. This also has removable water flow regulators pre-installed. The unit is plastic, painted chrome, feels really strong and durable. As apple would say, unapologetically plastic. The hose is really nice, its like a mix of metal and plastic.

Installation: Pretty straight forward instructions. You would think the image alone explains how to install it, after-all ikea gets away with it, however you should really read it. It explains the purpose of Anti-swivel Nut, that they give you an extra washer, that you may have to use plumbers tape, etc. Took me about 5-10 minutes to get it all working, leak free.

First use: So, I highly recommend you remove the water regulators or modify them (make holes bigger), I have pretty great water pressure, but I actually want to feel the water when it hits me. It was pretty easy to switch from Hand Shower, Shower Head, or both. I did notice that pressure was not even when I had both on, the hand shower was significantly lower pressure, but still better than the last hand shower I had. This could be how my water in my apartment operates, not sure. Also when I switched in the middle of the shower, for whatever reason, hot water would hit first, then back to the regular temp. Again this could also be my apartment water pressure system or my imagination. This is advertised a s a 3-way shower combination because it is a shower head, hand shower and both. The 24 settings is a joke, even when I just had the shower-head on, the Rain, Massage, & Mist were the only settings that worked perfectly Rain/Massage and Rain/Mist are not good combinations and while I would attribute this to my water pressure, I know on my last hand shower I was able to use rain/massage without an issue. Its ok, I can live with out it. FYI they get the 24 settings because of the 5 settings on the hand shower, 5 settings on the shower head, and the possible combinations with the combo, which my math gives me 20, so the other 4 must be magical, that is not why i bought this anyways. The hose is lovely, its great quality, feels great compared to the plastic hose I had before. The anti-swivel nut is great! I wish I had this on my last shower, it makes it that when you try to rotate the shower head, it does not move the entire unit.

Later use: So I have noticed that whenever I am not using the the rain setting, meaning I am using mist or massage, the rain portion of the shower head and hand shower drips a little bit, no big deal, just shows the quality of the unit. Also I find the hand shower difficult to change the settings when my hands are wet, I usually just use my hand towel and I am good to go, I think this will loosen over time with use. The shower head changes just fine. The shower head can really make it rain, the massage feature is nice, but don't expect a massage, instead just some nice jets and I enjoy the mist feature too, its a different way to shower, especially starting your shower.

TL;DR
I paid $16.99 for a nice looking combination shower that is unmatched by any of the competition. It has some flaws, including some pressure issues, but overall it is a great unit. If you want a high pressure, all metal, combo unit, look elsewhere and spend about $40-$60, but if you want a good, durable unit that offers lots of options and good shower, this is your best bet for under $20.
Read more
51 people found this helpful
Helpful
Report abuse

All That Nerdy Stuff
4.0 out of 5 stars Great value and works well
Reviewed in the United States on January 11, 2019
Verified Purchase
I bought this primarily because for its ability to provide spray from two shower heads at once, as well as the flexibility of the hose/handle setup. When I first took it out of the box, I was worried. It felt very cheap, and one of the end caps that holds the handled head together had come loose during shipping, so I had to reassemble the handle grips and tighten it up. It took a minute to figure out how to change the spray pattern: you have to twist the entire face, and there's no indication this is the case. Once you get it, it's easy, but it's not exactly intuitive. Most shower heads with multiple spray patterns I've seen have a small thumb grip you push to different positions. It's not a deal breaker, but it can be frustrating, and I could see how some people might not figure it out.

When I got to the hose, I was shocked: it's all metal, very high quality and really flexible. It seemed incongruous, but I figured I couldn't complain much for $20.

Once I got it all connected, it felt very sturdy, and when I turned on the water, I was happy to see no leaks at all. The shower heads both worked flawlessly at all settings, even when used together. They also somehow increased the pressure of the water, or at least so it feels. We've been using these for a few days now, and both my wife and I are very pleased. If I had one wish for this kind of setup, it's that it would include a stick-on holder for the hose connected head so you could place it in a different location/angle. Our shower is pretty big, but the water really doesn't reach far enough to cover the whole thing.

gartail
5.0 out of 5 stars Best shower experience!!!
Reviewed in the United States on April 8, 2015
Verified Purchase
In our effort to conserve water during this critical drought condition we decided to try water saving shower heads with hand shower spray. We've ordered and returned two oxygenic shower heads due to low water pressure when we came across this one. After reading the reviews and the very reasonable price we decided to give this a try.

Wow....this product gives the best shower we've ever experienced. This comes with water flow regulator. After our experience with the Oxygenic shower heads which we felt actually reduce the water pressure, we decided to remove the regulator from the shower head to get good water pressure. To ascertain the effectiveness of this product we left the water regulator in the hand shower spray. We couldn't tell the difference in the water pressure between with and without the water flow regulator, as this product gives great water pressure, we put the water flow regulator back in. We've placed an order with enough shower heads to outfit all our rental units and know our renters will be happy with this upgrade.
Read more
8 people found this helpful
Helpful
Report abuse
See all reviews
Pages with related products. See and discover other items: jet tubs, dual shower head with handheld, double shower head, bath and shower combo, bathroom shower combo, modern tub faucets
Back to top
Get to Know Us
Make Money with Us
Amazon Payment Products
Let Us Help You
EnglishChoose a language for shopping. United StatesChoose a country/region for shopping.
© 1996-2021, Amazon.com, Inc. or its affiliates