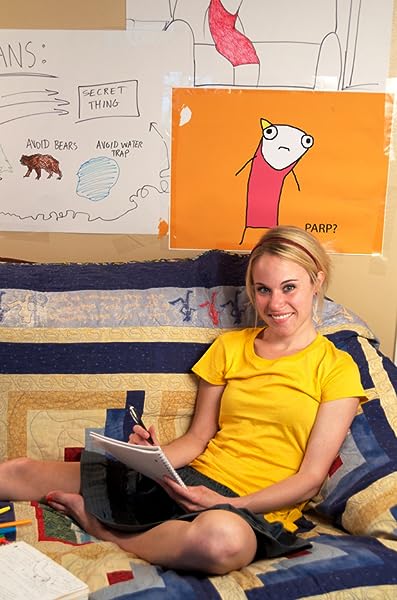 Hyperbole and a Half: Unfortunate Situations, Flawed Coping Mechanisms, Mayhem, and Other Things That Happened Paperback – Illustrated, January 1, 2013

An Amazon Best Book of the Month, November 2013:

Who among us has not, in moments that sometimes bleed through years, even decades, felt weird, desperate, and absurd--wishing we could turn all the lamest, most shameful episodes in our lives into hilarious illustrated anecdotes? If youre one of the millions hanging on Allie Brosh's every blog post, you already know you'll love Hyperbole and a Half in book form, especially since half its hyperboles are new. If you're suspicious of books because you live in a world of the INTERNET FOREVER, this is where you make an exception. If you just stumbled across Brosh and can't yet grasp the allure of a Web comic illustrated by rudimentary MS Paint figures, believe the hype. Brosh has a genius for allowing us to channel her weird childhood and the fits and starts of her adulthood through the manic eyes, gaping mouths, and stick-like arms in the panels that masterfully advance her stories, and she delivers her relentless commentary with deadpan hilarity. Neurosis has rarely been so relatable and entertaining. --Mari Malcolm

Guest Review of Hyperbole and a Half 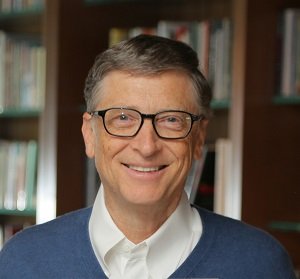 Bill Gates is a technologist, business leader, and philanthropist. He grew up in Seattle, Washington, with an amazing and supportive family who encouraged his interest in computers at an early age. He dropped out of college to start Microsoft with his childhood friend Paul Allen. He married Melinda French in 1994 and they have three children. Today, Bill and Melinda Gates co-chair the charitable foundation bearing their names and are working together to give their wealth back to society. This review originally appeared on Bill’s personal blog the Gates Notes on May 19th, 2015.

Some of the books I’ve recommended as summer reads really aren’t. They’re long nonfiction books that might look a little out of place beside the pool or on the beach.

But Hyperbole and a Half: Unfortunate Situations, Flawed Coping Mechanisms, Mayhem, and Other Things that Happened , by Allie Brosh, is an honest-to-goodness summer read. You will rip through it in three hours, tops. But you’ll wish it went on longer, because it’s funny and smart as hell. I must have interrupted Melinda a dozen times to read to her passages that made me laugh out loud.

The book consists of brief vignettes and comic (in both senses of the word) drawings about Brosh’s young life (she’s in her late 20s). It’s based on her wildly popular website.

Brosh has quietly earned a big following even though, as her official bio puts it, she “lives as a recluse in her bedroom in Bend, Oregon.” The adventures she recounts are mostly inside her head, where we hear and see the kind of inner thoughts most of us are too timid to let out in public. Despite her book’s title, Brosh’s stories feel incredibly—and sometimes brutally—real.

I don’t mean to suggest that giving an outlet to our often-despicable me is a novel form of humor, but she is really good at it. Her timing and tone are consistently spot on. And so is her artwork. I’m amazed at how expressive and effective her intentionally crude drawings are.

Some of Brosh’s stories are funny without being particularly meaningful, such as her tales about her two dogs and their humorously illogical inner thoughts. Here’s a typical snippet: “To the simple dog, throwing up was like some magical power that she never knew she possessed—the ability to create infinite food. I was less excited about the discovery because it turned my dog into a horrible, vomit-making perpetual-motion machine.”

And here’s a typical illustration: 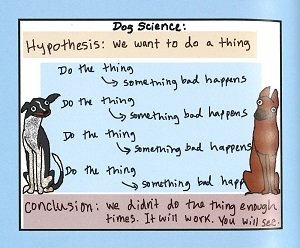 But her best stuff is the deep stuff, especially the chapters about her battles with severe depression. There is a lot of self-revelation here but no self-pity. She brings the same wit to this subject as she does to her stories about her dogs—even if it makes the reader more likely to tear up than crack up.

Here’s a typical snippet that follows a riff about feeling suicidal and not quite knowing how to let loved ones know about these feelings: 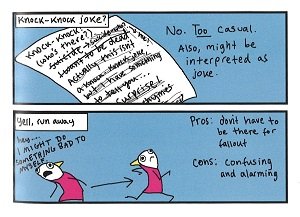 I suspect that anyone who has experienced depression would get a lot out of reading this book. The mental illness she describes is profoundly isolating: “When you have to spend every social interaction consciously manipulating your face into shapes that are only approximately the right ones, alienating people is inevitable.” It must be empowering for those who have struggled with depression to read this book, see themselves, and know they’re far from alone.

It might be even more valuable for those who have a friend, colleague, or family member who has experienced depression. Hyperbole and a Half gave me a new appreciation for what a depressed person is feeling and not feeling, and what’s helpful and not helpful. Here’s a good example: “People want to help. So they try harder to make you feel hopeful…. You explain it again, hoping they’ll try a less hope-centric approach, but re-explaining your total inability to experience joy inevitably sounds kind of negative, like maybe you WANT to be depressed. So the positivity starts coming out in a spray—a giant, desperate happiness sprinkler pointed directly at your face.”

I get why Brosh has become so popular. While she self-deprecatingly depicts herself in words and art as an odd outsider, we can all relate to her struggles. Rather than laughing at her, you laugh with her. It is no hyperbole to say I love her approach—looking, listening, and describing with the observational skills of a scientist, the creativity of an artist, and the wit of a comedian.

"I must have interrupted Melinda a dozen times to read to her passages that made me laugh out loud. . . . The adventures she recounts are mostly inside her head, where we hear and see the kind of inner thoughts most of us are too timid to let out in public. Despite her book’s title, Brosh’s stories feel incredibly—and sometimes brutally—real. . . . It is no hyperbole to say I love her approach—looking, listening, and describing with the observational skills of a scientist, the creativity of an artist, and the wit of a comedian." -- Bill Gates

“I would gladly pay to sit in a room full of people reading this book, merely to share the laughter.” -- Philadelphia Inquirer

"My wife, who rarely reads a book published after 1910 and who is difficult to make laugh, wept with pleasure while reading these comic illustrated essays from Ms. Brosh, who runs a popular web comic and blog. I had to find out what the fuss was about. The subjects run from light (cakes, dogs) to dark (the author’s own severe depression), and they foreground offbeat feeling and real intellect. Ms. Brosh’s inquisitive mind won me over, too.” -- Dwight Garner, New York Times

“In a culture that encourages people to carry mental illness as a secret burden . . . Brosh's bracing honesty is a gift.” -- Chicago Tribune

“Brosh captures humanity at its simultaneous worst and best with a razor wit that allows us to laugh at even our darkest of selves.” -- The Advocate (Baton Rouge)

"Will make you laugh until you sob, even when Brosh describes her struggle with depression.", Entertainment Weekly

"This is the BOOK OF THE YEAR." -- Elizabeth Gilbert

“One of the best things I’ve ever read in my life.” -- Marc Maron

Allie Brosh is the author of the #1 New York Times bestseller Hyperbole and a Half, which was named the Goodreads Choice Award Winner for Best Humor Book of the Year. Brosh has also given herself many prestigious awards, including “fanciest horse drawing” and “most likely to succeed.” HyperboleandaHalf.blogspot.com
Read more

Page 1 of 1 Start overPage 1 of 1
This shopping feature will continue to load items when the Enter key is pressed. In order to navigate out of this carousel please use your heading shortcut key to navigate to the next or previous heading.
Back
Next
Pages with related products. See and discover other items: humorous memoirs, cartoon book, a dog's life, what if comic