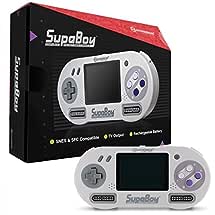 Visit the Hyperkin Store
Platform : Nintendo Super NES |
Rated: Rating Pending
4.5 out of 5 stars 450 ratings
Currently unavailable.
We don't know when or if this item will be back in stock.

At home or on the go, the SupaBoy plays your favorite Super Nintendo and Super Famicom cartridges anywhere you are. Portable or home console, the SupaBoy is the choice.

4.5 out of 5 stars
4.5 out of 5
450 global ratings
How are ratings calculated?
To calculate the overall star rating and percentage breakdown by star, we don’t use a simple average. Instead, our system considers things like how recent a review is and if the reviewer bought the item on Amazon. It also analyzes reviews to verify trustworthiness.

Lee Bills
2.0 out of 5 stars Fun, but buyer beware
Reviewed in the United States on September 27, 2015
Verified Purchase
So I LOVE the product, it works amazing, casing is sturdy, and it can play any game in my collection, even my SFC games and Super Mario RPG (the made in Japan cart, I heard that the Mexican-made cart doesn't work with it). The screen is a bit smaIl, but beautifully displays games with minimal blurring of pixels (no dead ones thankfully). love the TV-output feature, and had a great time playing it with friends. HOWEVER! After 3 months of use, The cheaply-attached Mini-USB charger female end of the device snapped off and fell deep into the casing. So now, the device works, but cannot be charged! And apparently the warranty is only one month (how pitiful). I heard they give you a longer warranty if you buy directly from them, but as for me, I'm outta luck. I may buy another, or at least buy an FC-16, because I had a blast with this thing. Just be aware that this thing is a piece of cheap, Chinese-manufactured junk, albeit a quite entertaining one.
Read more
19 people found this helpful
Helpful
Comment Report abuse

Ryan Sil. (Gamer & PC/Android indie dev)
5.0 out of 5 stars A dream come true
Reviewed in the United States on December 4, 2014
Verified Purchase
What do you get if you take one of the best (if not THE best) video game consoles of all time and make it something you could actually carry around and play? You get the Supaboy, of course! I have to say, after finally nabbing this thing for my birthday, I think I've given the FC 16 Go way too much credit, as this does the job as a portable Super Nintendo remarkably well in comparison! The FC 16 Go is super-bulky (since there's real system hardware in there), has two wireless controllers powered by triple-As, and cartridge space too wide to be played while carrying it or else the game will crash in no time.

This beast, on the other hand, features a more slick design that you can actually grip, looks as stylish as its original TV brethren, has inputs for the original controllers, and has enough cartridge space so the games can be inserted and played without crashing while you're holding the system. As a result, the Supaboy is a flippin' godsend!

As if it wasn't great enough that you could play just about all of the entire library of diverse and vibrant classic video games, you could even hook the console up to your television and play it exactly like an old Super Nintendo system! And despite its smaller size, it's still big and bulky enough to hold the original system hardware inside. Does that meeaaa-YES! You can play almost every single game! I'm not sure about games that support the Super Scope, since that peripheral requires an old television, but I can safely say that it played Star Fox perfectly. Heck, in case if you feel like playing a large Game Boy or Game Boy games on the TV...Yes, the Super Game Boy is in fact compatible! Everything that was compatible on the old Super Nintendo is available territory here!

Sekar
4.0 out of 5 stars The Supaboy: Portable SNES - Is it worth the money?
Reviewed in the United States on July 29, 2016
Verified Purchase
As far as I know, playing SNES games is best off on a phone with an Xbox one or PS4 controller connected to it. But what if you wanted to play your actual cartridges on an actual portable version of the SNES? Well it's possible with the Supaboy made by Hyperkin, who is also responsible for the Retron 5 Emulation Console.

Pros:
• All cartridges from all regions are usable so if you wanted to play a Super Famicom game like "Rockman & Forte" ("Mega Man & Bass" in America), it is easy as 1-2-3.
• Headphone jack for when you wanna hear Guile's theme privately.
• Audio volume is adjustable for when you want sound or not.
• Super Boy is compatable.
• Can be connected to the TV, which replaces your actual SNES.
• Can connect controllers to the console, but only works on the TV mode.

Cons:
• When sound is at the max, you can hear a buzz sound.
• D-pad is stiff and buttons are too far out for me.
• The start button is on the left side instead of the right side.
• When connected to the TV, you have to connect a controller to the Supaboy unless your using a retrobit adapter for some other console like when you wanna play "Sonic the Hedgehog 2" on the SNES (Great adapter which you need to buy).
• If you place the cartridge in an odd motion, you could get a message about illegal copyrights.
• Pulling out the cartridge is hard, and you have to pull out really hard.
• The retrobit adapters don't work on the console (when not connected to the TV).
• The only way you know if it is out of charge is when the screen glitches.

In the end, no matter all the cons, you can eliminate the cons for what the Supaboy does on-the-go. I think it's worth the money, unless you prefer playing SNES games with an Xbox one elite controller 😄.
Read more
3 people found this helpful
Helpful
Comment Report abuse
See all reviews

jessie laurier
5.0 out of 5 stars SupaBoy SNES gaming system
Reviewed in Canada on February 27, 2016
Verified Purchase
BEST GIFT EVER! my fiancé loves this. This product is awesome, not only can you play it on the go but you can hook it up to your TV so that you can play big screen style with a player 2. You can still play player 2 mode on the handheld though on the go. This is a good alternative to buying a used SNES as its less money and brand new. You never know what will happen if you buy a SNES bundle from someone... You risk it not working and then being out money. This product is amazing for the Nintendo lover in your life!'
Read more
One person found this helpful
Report abuse

Amazon Customer
1.0 out of 5 stars Poor support from manufacturer. Do not recommend
Reviewed in Canada on June 23, 2017
Verified Purchase
Has had audio buzz issue since day 1 - so loud that it's unusable.
Contacted Hyperkin Support and have been given the run around because I am not from USA.