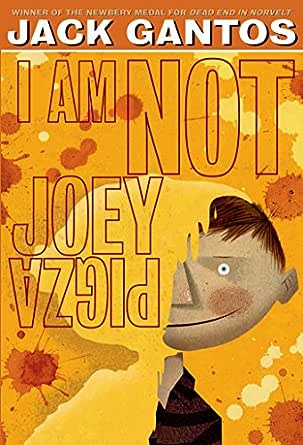 You've subscribed to Joey Pigza! We will preorder your items within 24 hours of when they become available. When new books are released, we'll charge your default payment method for the lowest price available during the pre-order period.
Update your device or payment method, cancel individual pre-orders or your subscription at
Your Memberships & Subscriptions 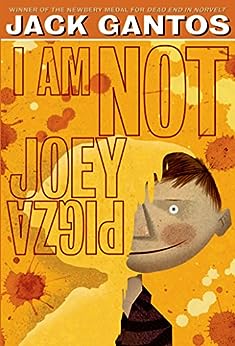 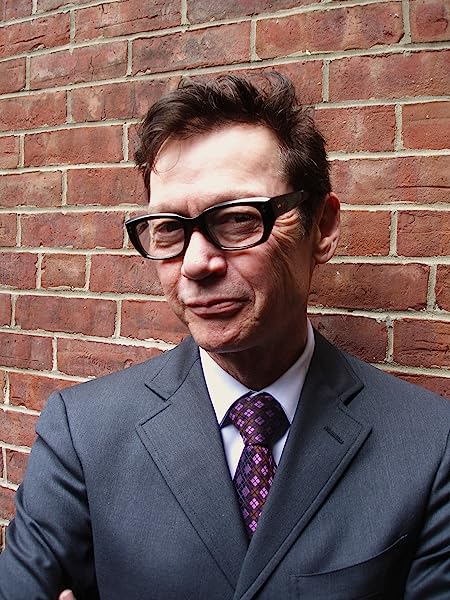 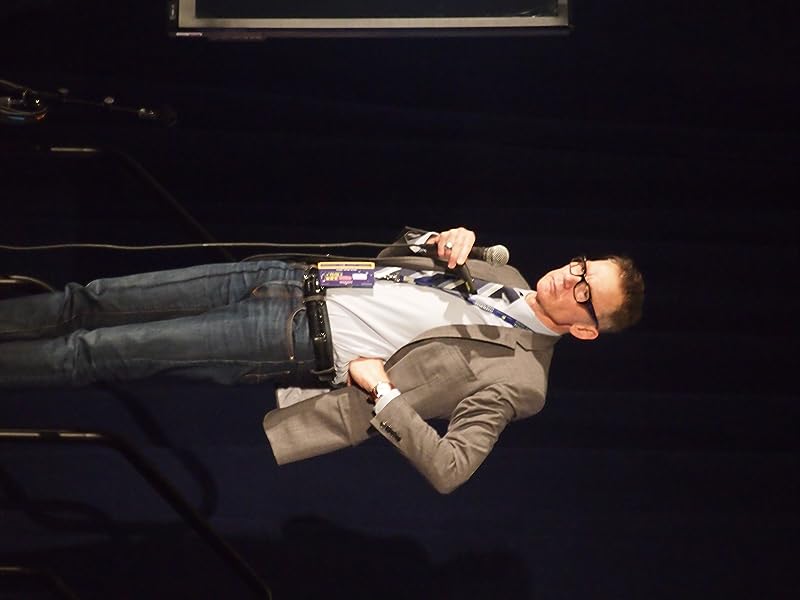 I Am Not Joey Pigza Kindle Edition 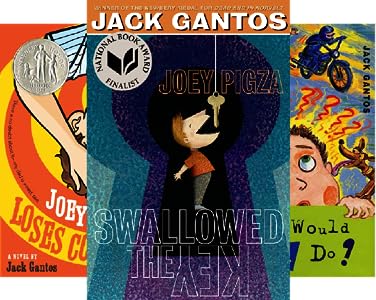 "Delightful." —People magazine
"Life becomes even more complicated for the wired sixth grader . . . hilarious."--Starred, Booklist
"Stands well on its own, though anyone new to Joey's saga will want to read more.  This is Gantos at his best, and that's saying a lot."—Starred, Kirkus Reviews

"Gantos tells the tale with unfailing humor, delicious wordplay, and many hilarious scenes."—Starred, School Library Journal
"Joey steadfastly remains on his path of self-knowledge."—VOYA
"Gantos is wise and subtle in his exploration of his hero's identity dilemma."—The Bulletin of the Center for Children's Books
"Readers will admire Joey's genuine desire to make his parents proud and laugh at his zany perspectives." —IRA
“Middle grade readers who know Joey will be happy to see his return.” —TeenReadsToo.com

Jack Gantos has written books for people of all ages, from picture books and middle-grade fiction to novels for young adults and adults. His works include Hole in My Life, a memoir that won the Michael L. Printz and Robert F. Sibert Honors, Joey Pigza Swallowed the Key, a National Book Award Finalist, and Joey Pigza Loses Control, a Newbery Honor book. Jack was born in Mount Pleasant, Pennsylvania, and when he was seven, his family moved to Barbados. He attended British schools, where there was much emphasis on reading and writing, and teachers made learning a lot of fun. When the family moved to south Florida, he found his new classmates uninterested in their studies, and his teachers spent most of their time disciplining students. Jack retreated to an abandoned bookmobile (three flat tires and empty of books) parked out behind the sandy ball field, and read for most of the day. The seeds for Jack’s writing career were planted in sixth grade, when he read his sister’s diary and decided he could write better than she could. He begged his mother for a diary and began to collect anecdotes he overheard at school, mostly from standing outside the teachers’ lounge and listening to their lunchtime conversations. Later, he incorporated many of these anecdotes into stories.  While in college, he and an illustrator friend, Nicole Rubel, began working on picture books. After a series of well-deserved rejections, they published their first book, Rotten Ralph, in 1976. It was a success and the beginning of Jack’s career as a professional writer. Jack continued to write children’s books and began to teach courses in children’s book writing and children’s literature. He developed the master’s degree program in children’s book writing at Emerson College and the Vermont College M.F.A. program for children’s book writers. He now devotes his time to writing books and educational speaking. He lives with his family in Boston, Massachusetts. --This text refers to the paperback edition.

Starred Review. Grade 5–7—Irrepressible Joey must draw upon all of his emotional reserves to face his latest challenge. His good-for-nothing dad shows up, having won the lottery and acquired a new identity. Carter Pigza is now Charles Heinz; he's won back Joey's mother, Fran (renamed Maria); and Joey is expected to forgive him his past sins and reinvent himself as Freddy Heinz. Dad has big plans for the family. He's bought a run-down diner and will use his son to drum up business by standing by the roadside in a bee costume. Mom is on a spending spree and pressures Joey to forgive his father and do as he says. But Joey senses how wrong this is, and his struggle is palpable. By the time he concedes, his father has given up on the diner idea and has spent all of his money on losing lottery tickets. As usual, when the chips are down, Carter takes off, just as Fran is about to have a baby. Gantos tells the tale with unfailing humor, delicious wordplay, and many hilarious scenes, but this is the darkest Joey book to date. Carter's unreliability is a given, but Fran Pigza's willingness to buy into the surreal scene is unsettling and underscores the fact that Joey is really on his own. Nevertheless, readers will cheer as his indomitable spirit prevails; he neither rescinds nor regrets his forgiveness, and he is thrilled to have a baby brother. The appearance of Junior Pigza promises a new purpose in Joey's life, the possibility of a future ally in his crazy world, and, perhaps, adventures to come.—Marie Orlando, Suffolk Cooperative Library System, Bellport, NY
Copyright © Reed Business Information, a division of Reed Elsevier Inc. All rights reserved. --This text refers to an alternate kindle_edition edition.

Joey has come a long way to find himself, but now his dad is back and wants him to become someone totally different. Does he want to? Has Dad really changed? Can Joey forgive him? Gantos knows his character and his problems well enough to read with a jerky rhythm and choppy inflection, reminding us that Joey has to work hard to keep his world, and his brain, under control. Gantos also brings out the sweet, sensitive, loving side of Joey, whose world is starting to fall apart once again. We hear the panic building in his increasingly loud voice--as we know it's building in his head--as he tries to calm and take care of himself because the adults in his life aren't doing their jobs. W.L.S. © AudioFile 2008, Portland, Maine-- Copyright © AudioFile, Portland, Maine --This text refers to an alternate kindle_edition edition.

*Starred Review* In this fourth installment of the Joey Pigza series, life becomes even more complicated for the wired sixth-grader when bad dad Carter and mom Fran reconcile and, in an attempt to start anew, reinvent themselves as the high-living Charles and Maria Heinz. Aided by a small pool of lottery winnings, hyperactive Charles dreams of success as the owner of a bee-themed diner and enlists the cooking and PR talents of Joey, whose schooling is quickly eschewed for an oversize bee costume and a sign advertising "fast food."Joey struggles with forgiving Charles for their rocky past and embracing his new identity as Freddy Heinz, but it is the memory of his grandmother and news of a baby Heinz on the way that prompt him to accept his father and realize that the adults in his life may have just as much difficulty making the right choices as he does. Gantos' hilarious storytelling, including accounts of an over-the-top "rewedding," an all-out paintball war between father and son, and a thwarted attempt at sneaking into an amusement park help soften the more serious issues at play in the story. Although the ending is heartbreaking, Joey, assuming his old identity, learns to let go of the past and dedicates himself to being a good role model for his new baby brother. McKulski, Kristen --This text refers to an alternate kindle_edition edition.

4.5 out of 5 stars
4.5 out of 5
54 global ratings
How are ratings calculated?
To calculate the overall star rating and percentage breakdown by star, we don’t use a simple average. Instead, our system considers things like how recent a review is and if the reviewer bought the item on Amazon. It also analyzes reviews to verify trustworthiness.
Top reviews

Unknown
5.0 out of 5 stars What could have been sad stories are handled with Joey and his little dog, there is a little Joey in some way in all of us.
Reviewed in the United States on May 28, 2018
Verified Purchase
Have read every book by Jack Gantos to my granddaughter, what surprised me the most is how much we both laughed and fell in love with Joey and his crazy hot mess of a family.
Read more
Helpful
Comment Report abuse

Yvonne
1.0 out of 5 stars Parents read first
Reviewed in the United States on September 27, 2018
Verified Purchase
I bought the book for my son who has adhd so that he could relate. This series does not reflect our family.
Read more
Helpful
Comment Report abuse

Tammy J. Lahrmer
5.0 out of 5 stars Extremely pleased
Reviewed in the United States on February 24, 2012
Verified Purchase
I am very pleased with this purchase. Not very many books address the subject of ADHD from the child's point of view, and this book does so very well and tastefully, and in language that a 11 year old and adults can easily understand. I gave it to my 12 year old granddaughter who has ADHD and she loved it. It did her a world of good to know that there are other children out there in her same predicament. I would recommend it to any child or adult who is dealing with children with ADHD. I liked it so well, I purchased the entire series!
Read more
Helpful
Comment Report abuse

Kindle Customer
4.0 out of 5 stars Enjoyed by middle schooler
Reviewed in the United States on May 24, 2017
Verified Purchase
I bought this for my middle schooler who enjoyed reading it.
Read more
Helpful
Comment Report abuse

Ann D. Shaughnessy
5.0 out of 5 stars Um good book
Reviewed in the United States on April 8, 2017
Verified Purchase
It was so good I couldn't put it down until I was completely done with the book that I read. Good book 10/10
Read more
Helpful
Comment Report abuse

prime customer
2.0 out of 5 stars not so good
Reviewed in the United States on October 2, 2014
Verified Purchase
The ONLY Joey Pigza book I don't love. Jack should have quit with #3.
Read more
Helpful
Comment Report abuse
See all reviews

Welsh girl
5.0 out of 5 stars Another Joey Pigza classic read
Reviewed in the United Kingdom on May 6, 2013
Verified Purchase
This is an inspiring, funny and at times very moving story of a child with enormous learning difficulties and the sometimes hillarious situations he finds himself in. EVERY child should read this and the other books in the Joey Pigza series.
Read more
Report abuse