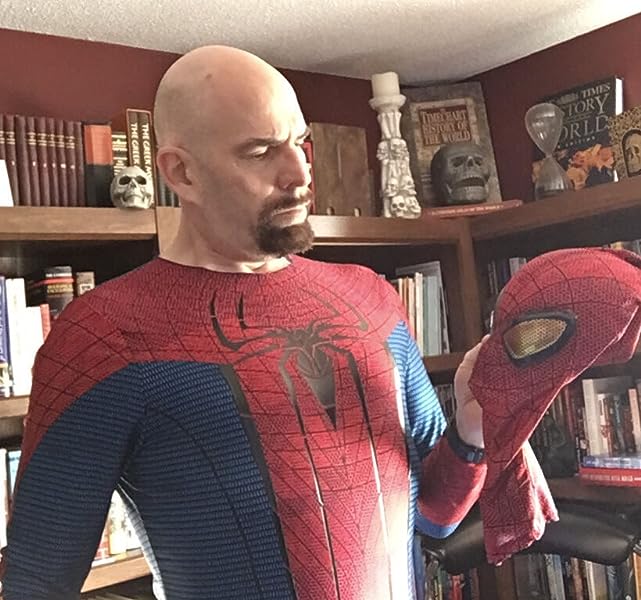 Mark Leslie lives in Hamilton, Ontario and has been writing since he first discovered his mother’s Underwood typewriter in the spare bedroom closet of the family home at the age of thirteen.

Mark’s first book was a short story collection entitled One Hand Screaming, which he released in 2004. Since then, he has edited science fiction and horror anthologies such as North of Infinity II (2006), Campus Chills (2009), and Tesseracts Sixteen: Parnassus Unbound (2012). Curious about the paranormal (and still frightened by the monster under his bed), Mark also writes a series of true ghost story books for Dundurn which include Haunted Hamilton: The Ghosts of Dundurn Castle & Other Steeltown Shivers (2012), Spooky Sudbury: True Tales of the Eerie & Unexplained (2013), and Tomes of Terror: Haunted Bookstores & Libraries (2014).

When he is not writing, Mark Leslie tacks “Lefebvre” back onto his name and works for Kobo Books as Director of Kobo Writing Life, a platform that allows authors and smaller publishers direct access to publish to Kobo’s global company. He divides his free time between playing LEGO and video games with his son, Alexander, tasting regional crafts beers, and getting lost in bookstores and libraries.

Start reading I, Death on your Kindle in under a minute.

nicole w brown
5.0 out of 5 stars An Excellent Read!
Reviewed in the United States on November 30, 2016
This review is based on a pre-published copy of the book. Nonetheless, I was very impressed with the creative way in which it was written. Most of it is written as a blog complete with comments from people out there on the internet, which provides in an interesting way, dialogue. Peter O'Mallick, the blogger, started the blog at the suggestion of his school guidance counselor. Peter believes that he can cause the death and suffering of those around him in some way, starting with his mother who died giving birth to him and his father who died when he was seven by getting run over by a car when he followed Peter who disobeyed and ran across the street to play with his friends. He also believes he killed his childhood friend in a hunting accident when the kid ran ahead and tripped and shot himself.

At the beginning of his blog his girlfriend, Sarah, won't speak to him. Her father had recently caught her performing a sexual act on him and when he confronted Peter he didn't yell at him, he just expressed his disappointment, which angered Peter. Right after that, he ended up with a brain tumor. Peter believes that Sarah must blame him for her father's tumor and that that is the reason she is not speaking to him. He loves her so much he is almost stalking her at school. The internet commenters tell him to give her some room and that she just got some bad news about her father and needs to process it. So he is trying to give her the room she needs. He is also having these horrific nightmares that follow him throughout the book.

At this same time he is falling in love with Shakespeare. Especially Hamlet and goes to the English teacher to ask for suggestions on what to read when he sees her with Sarah and becomes jealous of the teacher who has been spending so much time with her. That night the teacher and Sarah are in a car accident and the teacher ends up in a coma, while Sarah is lucky to walk away with just some cuts and bruises.

They get a new teacher, Robbie who introduces Peter into the world of books. Be prepared to add many authors to your reading lists here such as Sean Costello, Richard Layman, and Robert J. Sawyer. He feels a real rapport with this teacher and he even starts to stop thinking of Sarah some and start thinking of a girl named Monica instead. The day after he asks her out and she blows him off something has happened to her and Peter blames himself once again whether it's his fault or not. And yes, more bad things will happen. And there's a mystery man who is in search of Peter for his own nefarious purposes.

By this time he is interacting more with the people who comment on his blog. Sometimes this will be an antagonistic relationship as he feels as though some of these people do not understand him or are giving him bad advice. This book shows how intimate we can become with complete strangers online and how angry and emotional that relationship can become when we feel we are not being heard or understood. Yet, it's hard to convey an emotional conversation online (though in this case, Leslie conveys these conversations and actual ones recalled rather well). It is easier to get your meaning across if you are face-to-face with the person. But even then, while you might be understood, you still could be wrong. Leslie masters this unique way of writing in blog form with comments.

There will be times when you will want to give Peter a hug and tell him it will be alright and at times you will want to shake him and tell him to snap out of it. He's a teenager, so that's a common feeling when dealing with teenagers. This book quickly had me hooked and I did not figure it out so I was surprised by the ending. I cannot recommend it enough.

Having stepped out of my comfort zone to take on another of Mark Leslie’s books, I was pleasantly surprised, and yanked into this page turner from the start.

I, Death, follows troubled teenager, Peter O’Mallick, who carries with him a deadly curse. With the encouragement of a teacher (a nod to that one unforgettable educator most of us had, who somehow made learning fun) Peter starts a blog and relives the tragedies of his life, using cyberspace as a newly found therapeutic outlet. Peter tries to make sense of heartbreak, pain, and the fact that everyone he cares about eventually ends up dead. Only once Peter learns to control his gift (as best as one can when a simple look, and well placed thoughts, tends to kill) he’s pulled into a scene where his curse, might actually allow him to finally fit in. Only the intentions of his new found ‘family’ escalate from bad to worse, where Peter continues to struggle with both his past and his future.

Full of realistic, honest teenage angst, slightly disconcerting situations, a bit of a lesson in some of the greatest literature ever written, and hilariously well placed shameless self-promotion (A ballsy move, I’m sure only Leslie can pull off) this book has it all, evening managing to come around full circle with a twisted ending you honestly don’t see coming.
If you’re looking for an easy, yet uniquely written, fast-paced read, I, Death is a thrill with comedic undertones that will leave you both satisfied and disturbed, but in the greatest way possible.

Mark Leslie is, without a doubt, an author I will keep coming back to, having won me over with his chilling short stories, well written poetry, and spooky non-fiction, and now, I, Death. With a flair for the macabre, Leslie manages to put a refreshing spin on anything he creates, probably making him one of many underrated Canadian storytellers.

I did receive a copy of I, Death from the author, however, that does not make my review any less honest.
Read more
Helpful
Comment Report abuse

paratoys
4.0 out of 5 stars Slow start, lengthy ending, great book in between
Reviewed in the United States on February 11, 2017
I had a hard time getting started with this book. I thought it was going to be some sort of teen angst thing. The focus is on a teenager, but he is not your typical boy next door. Let's just say, you wouldn't want to make him angry, but I couldn't wait to read more night after night. This book describes graphic sex and rape scenes, in case you want to avoid that, and for some reason continues after what I considered to be a very satisfying ending. Eventually the extension led somewhere interesting, but maybe it should have been saved for a sequel. Overall, worth the read.
Read more
One person found this helpful
Helpful
Comment Report abuse
See all reviews