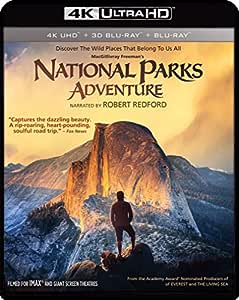 Robert Redford (Actor), Greg MacGillivray (Director) Rated:
NR
Format: Blu-ray
4.2 out of 5 stars 109 ratings
Available at a lower price from other sellers that may not offer free Prime shipping.

The power of America’s national parks is undeniable. Millions have packed up the family to hike through impossibly lush forests, to gaze upon towering cliffs and deep-plunging canyons, to witness the breathtaking arcs of natural history, and, most of all, to share moments of wonder amid the protected treasures of this land.
A MacGillivray Freeman film produced in association with Brand USA and narrated by Academy Award winner Robert Redford, National Parks Adventure is acclaimed filmmaker Greg MacGillivray’s most visually ambitious giant-screen film to date: a film that offers not only a sweeping overview of the national parks’ history, but is equal parts adrenaline-pumping odyssey and soulful reflection on what the wilderness means to us all.
Includes 4K SDR And 4K HDR For The Full UHD Experience. Ultra HD TV With HDR Needed To Access 4K HDR.
Digital Copy Offer Expires May 1, 2019

4.2 out of 5 stars
4.2 out of 5
109 global ratings
How are ratings calculated?
To calculate the overall star rating and percentage breakdown by star, we don’t use a simple average. Instead, our system considers things like how recent a review is and if the reviewer bought the item on Amazon. It also analyzes reviews to verify trustworthiness.
Top reviews

D. Sinclair
2.0 out of 5 stars Some nice scenery but disappointing overall
Reviewed in the United States on July 27, 2018
Verified Purchase
Cinematography, graphics and sound are impeccable as always, but this film was disappointing to me. The operative word in the title is "Adventure." There's a bit of national parks, and a whole lot of three people climbing, biking, rafting, hooting and hollering, fist pumping and taking photos of each other doing goofy poses on top of rock formations. The underlying message seems to be: the national parks only have value if you conduct some REI-sponsored activities in them.

I'm sure the film's three on-camera 'guides' are nice people who obviously appreciate the great outdoors, but I, for one, didn't need them. I would rather see more of the parks themselves, and learn something about their history, biology, geology, etc. I don't need to see a place through a character, which is what these IMAX films so often seem to think I need. There was an occasional contemplative or heartfelt moment which I appreciated.

The score's notable use of pop songs also did not speak to me. The show seems to be aimed squarely at groups of school kids rotating through the IMAX theatre. I'm 55. If you're planning on showing it to kids, they will probably enjoy it more than I did.

The 4K HDR version looks great. The 3D version has some nice shots, but many of the visuals are expansive wide shots so you won't get much sense of 3D from those. But even many of the closer shots did not seem to be 3D at all. They were completely flat, and I don't think they were shot 3D.

The Special Features are also a bit of a disappointment. They are mostly bite-sized pieces that replay a lot of the footage you've already seen in the movie, with an occasional insight into how it was shot. Most of them start with the same 15 second title sequence, so you're forced to watch the same opening again and again. There is also no Play All feature, so you keep having to go back to the Main Menu in order to move on to the next very short featurette. This is lame.

jjcphoto
2.0 out of 5 stars Very disappointed
Reviewed in the United States on August 3, 2018
Verified Purchase
I was expecting something similar to Planet Earth in 4K. There is no comparison. It opens and closes with commercials. The first few minutes had banding in the video similar to what you get on some YouTube videos that claim to be 4K. The remainder of the video did have good quality. I expected scenes of the parks that may be hard to get to and spectacular. We just see common sites and a few helicopter shots. They didn’t remain in any park for very long at all. I also expected an intensive soundtrack by an orchestra. All we get is hillbilly/folk music. I feel very cheated for pre-ordering at full price.
Read more
36 people found this helpful
Helpful
Comment Report abuse

GJACKSON
4.0 out of 5 stars Some Spectacular 3D. Some Mediocre 3D. And the Sound!? Butchered.
Reviewed in the United States on September 3, 2019
Verified Purchase
Shout Factory is a descriptive name for this presentation. I disconnected my center speaker during the second "viewing". I thought the Nature sounds were wonderful in Dolby Atmos but they were constantly OBLITERATED by the Narration. The spacious animal calls from all directions as the thunder rolls in from the distance to NARRATION THAT KNOCKS YOUR SOCKS OFF AND THREATENS TO DAMAGE YOUR 7.2.1 SPEAKERS. A babbling brook with a sorrowful bear learning 25 ways to not catch a salmon. HE'S HAVING A HARD TIME TRYING TO FIGURE OUT JUST HOW TO GET A MEAL.
I would love it if there was an option of turning of narration and/or music on this type of Nature Filming. I unplugged my center speaker which made the narration less IN YOUR FACE but did not remove it entirely because the sound engineer also routed it through the Left/Right speakers as well. In the parts of the film without narration and/or music the sounds of nature were mesmerizing. I turned of my lights and my TV and listened to the spectacular sounds that were all around me. Sounds from above, behind, panning from hard right front to hard left rear. Thunder rolling in from the distant right.
Note to Directors: Please be mindful of the focus of Nature films. NATURE. Including the sound palette.
Read more
6 people found this helpful
Helpful
Comment Report abuse

David L. Oliver
3.0 out of 5 stars Flawed hodgepodge
Reviewed in the United States on August 7, 2018
Verified Purchase
This could have been great. A lot of history and a lot of scenery are packed into a short film. But there are too many flaws to give it a high rating. The video is dark and over-saturated, with too many jumps from one location or activity to another. The Atmos soundtrack has Robert Redford's narration very loud on the center channel while musicians float around the room and sound effects appear at random points in space and time. It was conceived as a road trip through the parks, but the editors turned it into more of an acid trip.
Read more
7 people found this helpful
Helpful
Comment Report abuse

David Staton
3.0 out of 5 stars I'm a National Parks fan, so...
Reviewed in the United States on February 1, 2020
Verified Purchase
This video came in regular blu-ray, 3D blu-ray, and 4K versions in the same box. I bought a large 3-D 4K television in 2019, so I am especially interested in 3-D videos. I must say the 4K video was actually the most impressive format for this particular video. The 3D was almost all 2D video that had been weakly post-processed into 3-D. I think that true native 3D of this subject matter would have been great, but they missed the mark here.

The scenery depicted in 4K was really striking. The narrative line was less impressive. Having been to many of these parks, I found the video brought back some good memories. It was not expensive, so I'm still glad I bought it.
Read more
3 people found this helpful
Helpful
Comment Report abuse

Denton Taylor
1.0 out of 5 stars over-boosted, over-saturated, fake colors
Reviewed in the United States on July 27, 2018
Verified Purchase
This has the most over-boosted, over-saturated, fake colors I have ever seen. Have a 4k Oppo player and 4k LG OLED TV, capable of HDR playback. Thanks goodness Amazon allows returns.
Read more
17 people found this helpful
Helpful
Comment Report abuse
See all reviews

Alan
4.0 out of 5 stars High quality video with beautiful scenes, but short in length and pricey.
Reviewed in Canada on September 6, 2018
Verified Purchase
Video is very well done with beautiful photograpy, however, it was very short 4K video ( 1 disc) given the price $31.99 CA. Shortly after purchasing on Amazon I found it available for $22.00 CA in a local store. As a comparison, I purchased Planet Earth II in 4K for $30.00 CA which contained 4 discs loaded with superb interesting videos; a much better value. Bottomline, video was excellent but over priced.
Read more
Report abuse

Picky
3.0 out of 5 stars 3D was very disappointing. It did have a few strong 3D moments but...
Reviewed in Canada on August 13, 2018
Verified Purchase
Most of the wide scenic park shots looked 2D. It was frustrating because
A great 3D scene of the 3 characters would be followed by several scenes
of nearly 2D. I Gave it 3 stars because the park info was interesting.
Read more
Report abuse
See all reviews