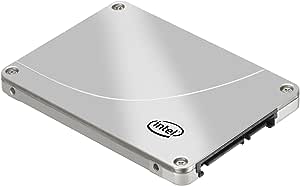 Add to Cart
$299.95
& FREE Shipping on eligible orders. Details
Sold by: HQ Tech
Have one to sell?
Sell on Amazon

3.6 out of 5 stars
3.6 out of 5
68 customer ratings
How does Amazon calculate star ratings?
Amazon calculates a product’s star ratings based on a machine learned model instead of a raw data average. The model takes into account factors including the age of a rating, whether the ratings are from verified purchasers, and factors that establish reviewer trustworthiness.
Top Reviews

Carl
5.0 out of 5 stars Incredibly fast, good price, easy to install
Reviewed in the United States on February 7, 2013
Verified Purchase
This 2.5" drive come with a standard adapter to install in a 3.5" bay. Unfortunately my brand new Dell Optiplex 9010 has nice but non-standard drive brackets (plastic no tools) so I couldn't cleanly install the drive. This isn't Intel problem it is Dell's. Would you believe that it took 2.5 hours on chat and phone to Dell parts sales and then technical support to order the $6.00 part?

Once installed cleanly, everything else was trivial. You download Intel's version of Acronis from the Intel website, install the software, and clone your current drive. Ten minutes elapsed time. Either change cables or change the boot sequence and you are done.

Comparing the Intel 520 180 GB drive with the Western Digital WD2500AAKX, you get wonderful improvement. My boot time has decreased by more than 90%. There is no longer a noticeable delay when loading porky applications like Excel.

Here is some data from HD Tune.

minnesota reader
1.0 out of 5 stars Failed in less than a year
Reviewed in the United States on July 24, 2019
Verified Purchase
Started seeing errors here and there after 3 months. Thought it was my imagination, like maybe I forgot to save it right? Started losing whole documents at about the 10 month mark. Went back to a spinning hard drive and problems went away. When a SSD goes bad it loses the data forever so if you use an ssd be sure to back up regularly.
Read more
Helpful
Comment Report abuse

S. Baker
5.0 out of 5 stars My second Intel SSD, so far so good
Reviewed in the United States on February 18, 2013
Verified Purchase
This is a replacement for my X25-M. That drive lasted and still have ~95% life left after 3 years, according to Intel's tools. It was only 80GB, so too small for what I wanted. I got the 520 in the 180GB capacity; it allows me to move all of my VMs to the SSD, making them run much better.

The 520 is not the cheapest SSD. While functionally identical to other SF-2281 drives, this one has been validated and has a custom firmware, plus Intel's top-shelf flash memory. That was worth the extra money to me, but it may not to you.

I'm only using it on a SATA2 port, but it is more than fast enough there. This is one of the fastest SSDs you can get. Worth the money, and recommended.
Read more
Helpful
Comment Report abuse

joshua stone
5.0 out of 5 stars Excellent SSD, but less than perfect tools
Reviewed in the United States on December 29, 2012
Verified Purchase
I replaced my 5400 RPM HDD in my laptop with the Intel SSD, and it is by far the best upgrade I have made in a long time. It is now clear that by having an i7 CPU, 8GB of RAM, and an Nvidia graphics card, a HDD was a bottleneck in performance.

The read/write speeds on this device are phenomenal. Windows 8 boots, from the moment I press the start button to the login screen, in about five seconds. Applications like Google Chrome load instantly, and others like Libreoffice take no more than a second to load from a cold start. Also, loading of levels or maps in games is now almost instantaneous.

This drive is quiet, which should be obvious since there are no moving parts. As a side effect, there aren't any vibrations coming from it either. Now the only part moving in my laptop is the cooling fan, and I am no longer bothered by the low hum of a HDD.

Power consumption for this drive is great. I can now push six hours on a charge compared to five hours before with the HDD.

Support is pretty good. Intel has their SSD Toolbox available for download which provides functionality like service configuration, diagnostics, updating firmware, etc, for extending the usable lifespan of SSDs. Also, having a five year warranty is always nice.

Unfortunately, I have encountered some problems. The cables which come with the SSD are for desktop machines. This is not necessarily a bad thing, but a USB-to-SATA adapter which was recommended in the manual for data migrations in laptops was absent. While I did have a spare drive bay, this can be an inconvenience for anyone trying to migrate their data from one drive to another.

Another thing was that the migration utility could not migrate my data, having chosen the new SSD as a target drive while failing to select my HDD at all. I had to manually migrate data between the two drives, which was a nuisance. It seems that the problems were caused by the GPT layout of the HDD, which is a ridiculous problem to have in 2012 after Windows 8 ships with GPT by default.

Besides the problematic experience regarding data migration, I am very satisfied with the drive and I recommend it.
Read more
2 people found this helpful
Helpful
Comment Report abuse

M. Daniels
4.0 out of 5 stars new life in my computer
Reviewed in the United States on March 14, 2013
Verified Purchase
Three year old Dual core Windows 7 computer. About the time I normally buy a new computer. Happy I put this solid state drive in rather then spend on a new computer. Boot time is about 30 seconds now. Civ 5 runs a good deal quicker which I did not expect. A Windows update flashed by the screen in about 5 seconds. Don't need the drive space so I unplugged my old hard drive to save energy... quieter also. My security cameras also come on quicker... used to be my cat set them off but I seldom got a look at her... now there she is going about her kitty business. Computer also snaps awake when I jiggle the mouse. Delighted!
Read more
Helpful
Comment Report abuse

Julian G Halliday
5.0 out of 5 stars Fast, quiet, worth the cost
Reviewed in the United States on May 28, 2012
Verified Purchase
This drive is, in my experience, all it's cracked up to be. I had no trouble cloning my new laptop's C: onto this, and installing it. All my computers -- two desktop, one laptop -- now have SSDs housing their O/S and programs, and this update is simply the best way I've found of increasing my systems' performance, for the most part to a really startling degree. I bought 520 series Intel drives for all of these partly because of the 5-year warranty, and partly because I have some confidence that Intel products will integrate well with my other components. So far, I have no complaints, and having a responsive computer wherever I've working has been a very good way of reducing my stress level!
Read more
Helpful
Comment Report abuse
See all reviews from the United States

cyndi_cyndi
5.0 out of 5 stars また欲しいですね。
Reviewed in Japan on May 25, 2013
Verified Purchase
スピードも速く、大変気に入りました。別のパソコンもSSDに載せ替えようかと計画中です。
Read more
Helpful
Sending feedback...
Thank you for your feedback.
Sorry, we failed to record your vote. Please try again
Report abuse
Translate review to English