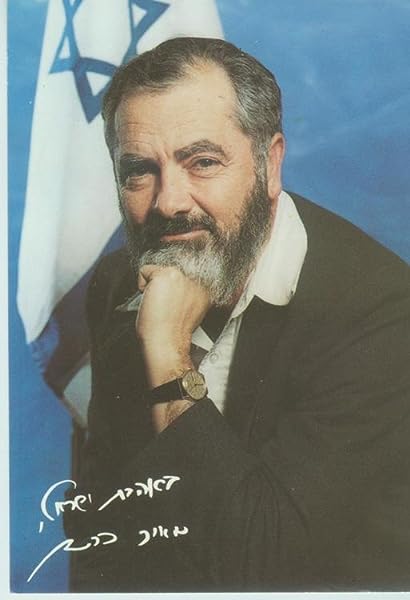 by Rabb Meir Kahane (Author)
4.7 out of 5 stars 40 ratings
See all formats and editions
Sorry, there was a problem loading this page. Try again.
Rabbi Meir Kahane (1932-1990) was the most controversial Jewish leader in the 20th century. He formed the Jewish Defense League in the USA and the KACH movement in Israel. Rabbi Meir Kahane wrote "The Ideology of Kach" in 1990 (just before his assassination). It is a summary of his political activism and its religious basis, as expressed in his major works such as They Must Go, Why Be Jewish?, and The Jewish Idea. "The Ideology of Kach," Rabbi Kahane's last finished work, is now, for the first time, available to the public. Rabbi Kahane gave his life for the ideas in this book.
Read more
Previous page
Next page

Rabbi Meir Kahane was born in New York City in 1932. He studied at the Mir Yeshiva in Brooklyn and was ordained in 1956. The same year, he completed New York Law School and later received a masters degree in International Relations from New York University. After serving as a congregational rabbi, he found the Jewish Defense League in 1968 to combat anti-Semitism.

Concerned about the alienation and assimilation of Jewish youth, Rabbi Kahane spent two decades touring American college campuses, exhorting Jewish students to learn about Judaism, make Aliya to Israel, and to stand up proudly as Jews.

In 1970 he spearheaed a campaign of Jewish activism which led to the emigration of tens of thousands of oppressed Jews from the Soviet Union.

He entered the political arena in Israel when he made Aliya in 1971, and was a member of the Knesset in Israel from 1984 to 1988. He authored several best-selling books, including Never Again, Why Be Jewish and The Story of the Jewish Defense League. His widely-read columns appeared weekly in the Jewish Press from 1961 to 1990.

Guy Gustafson
5.0 out of 5 stars why did it take 23 years to publish this book?
Reviewed in the United States 🇺🇸 on March 4, 2013
Verified Purchase
i'v read all of Rabbi Kahane's English books (except for the Vietnam one which is impossible to find) and this book is a lot more concise then his other books. its a great book for anybody new to the rabbi who wants the skinny on what he was all about with out spending to much time on it and at under 5 bucks this book is the way to go. but for the regular reader of Rabbi Kahane this book is a bit to short so the enjoyment ends really fast u could finish this book in one sitting or on one sabbath.

well if this book took 23 years to come out maybe they have some other unpublished material for printing. until his Tanach commentary is translated into English along with some of the other books he wrote in Hebrew some of us will just have to re-read what is already out there and its worth going over again. this book was a nice surprise.

Surak
5.0 out of 5 stars The solution to the Jewish dilemma
Reviewed in the United States 🇺🇸 on January 12, 2017
Verified Purchase
This small pamphlet is the last book written by Rabbi Kahane before his assassination in America. It is a concise statement of the Jewish dilemma and its solution. The Jewish dilemma is the struggle within the Jewish heart between the wish to assimilate and discover universal values, versus the particularism that nudges us to preserve our Jewish identity. Attempts to assimilate have always failed, as the rest of humanity resists the blurring of boundaries. Rabbi Kahane cites numerous texts from the Jewish library, as well as numerous examples from history, to conclude that the only healthy destiny for Jews is to embrace our unique gift - Torah - and our unique land - Israel.
Read more
4 people found this helpful
Helpful
Report abuse

musiclover
5.0 out of 5 stars A Good Short Read
Reviewed in the United States 🇺🇸 on December 11, 2016
Verified Purchase
A very quick read that sums up much of what Kahane had to say in his many books and articles. At this price and being such a small book, it's well worth buying multiple copies to give to those who could use to hear another line of thought than what they read in the NY Times, WAPO or hear from their Reform or Conservative Rabbi(if they even go to a shul). Written shortly before he was murdered by a Moslem, it's alas, still quite timely. Sadly, he was so right......
Read more
5 people found this helpful
Helpful
Report abuse

William N. Thompson
5.0 out of 5 stars Important Read for Everybody
Reviewed in the United States 🇺🇸 on July 11, 2017
Verified Purchase
The writings of Rabbi Meir Kahane( HY'D) are as relevant today as when they were written... Given the unabashed attacks on President Trump today, this could have been written about him...
Read more
4 people found this helpful
Helpful
Report abuse

Brian Rosenberg
5.0 out of 5 stars Incredible work on HaRav Meir Kahane ZT"L!!!
Reviewed in the United States 🇺🇸 on June 28, 2014
Verified Purchase
This is a must read especially for the left-wing Jews out there who worship the nightmare which is Obama. It's also great for the seasoned JDL right wing Zionist-Hoodlum, it will give you much enjoyment as it did for me!!! KAHANE CHAI!!!
Read more
9 people found this helpful
Helpful
Report abuse

DiegoBP
2.0 out of 5 stars Horrible editing.
Reviewed in the United States 🇺🇸 on December 13, 2013
Verified Purchase
Kahane's ideas deserve much more than the way they are presented in this book. Even though the points are clear and signed Kahane all over, the editing in this book is one of the worst I've seen. The grammar is horrible, especially the punctuation. It makes it a tedious read. For me, the book lost most of its appeal.

I really, really wanted to like this book, but I'm halfway through and I just want to finish it so I don't feel the burden to do so anymore.
Read more
2 people found this helpful
Helpful
Report abuse

Liz
5.0 out of 5 stars Kahane Was Right
Reviewed in the United States 🇺🇸 on August 23, 2015
Verified Purchase
What can I say? He told the truth, his party was becoming very popular in Israel, so it was outlawed and he was murdered.
Read more
4 people found this helpful
Helpful
Report abuse
See all reviews