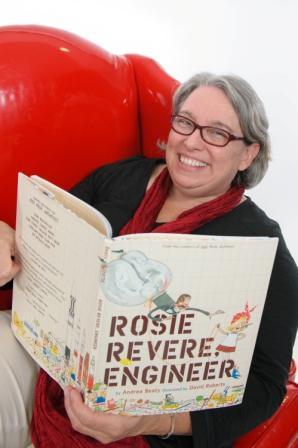 Iggy Peck and the Mysterious Mansion (The Questioneers) Hardcover – May 12, 2020

Start reading Iggy Peck and the Mysterious Mansion on your Kindle in under a minute.

4.4 out of 5 stars
4.4 out of 5
16 customer ratings
How does Amazon calculate star ratings?
Amazon calculates a product’s star ratings based on a machine learned model instead of a raw data average. The model takes into account factors including the age of a rating, whether the ratings are from verified purchasers, and factors that establish reviewer trustworthiness.

Amazon Customer
4.0 out of 5 stars Good story, bad timing
Reviewed in the United States on May 24, 2020
Verified Purchase
This book continues to follow Beaty’s band of Questioners. Ada’s aunt inherits a strange house that has all sorts of architecture combinations inside. They all think it’s haunted and need to find the missing furniture using Iggy’s knowledge of architecture and time periods. Unfortunately the house used to belong to someone whose family died in the 1918 Spanish Flu epidemic and so that is mentioned more than once. I say unfortunately as this book was released in May 2020 in the midst of the Covid-19 pandemic and so this subject matter hits a bit closer to home than it was intended and makes this book heavier than it was meant to be. Readers should consider this now relatable bit of history before reading with younger children. (Jump to chapter 14 to see where this is first mentioned)
Read more

Amy K
3.0 out of 5 stars Bad timing
Reviewed in the United States on May 20, 2020
Verified Purchase
READ THIS BOOK BEFORE GIVING IT TO A KID. I love all of the books and characters in this series. I had pre-ordered this book months ago and it came the other day. Obviously, they couldn't have known we'd be in the midst of a pandemic when this was written, but there is a 6 year old character in the book that died from the 1918 flu pandemic. I wished I had known before I gave the book to my child to read right now.
Read more
7 people found this helpful
Helpful
Comment Report abuse

lotuz books
5.0 out of 5 stars Great story - our favorite so far! And a good opportunity for talking about the current pandemic.
Reviewed in the United States on June 25, 2020
Verified Purchase
There was a lot to like in this book and it is the household favorite of all the Questioneers books so far - with both the adults and kids (4.5 and 3 years old).

First off, this is a very compelling "haunted house" story, even outside of the framework of the Questioneers. As a stand-alone book with the same plot but generic characters, it would still be a very good read! The plot is clever and it's mysterious enough that it was still interesting for the adults. Overall it was very engaging - all of us wanted to keep reading (and did) until we finished it.

If you are familiar with the rest of the series you can probably guess from the outset that there is not actually anything supernatural in this book and that every "ghost" and "haunting" has a completely naturalistic explanation. Ada, Rosie, and Sophia are a great supporting cast and bring the characteristics we know and love about them (and we are hoping to learn more about Sophia in October's Questioneers release).

Iggy's love of architecture is played very well here. All throughout the house he describes the different period architecture of each room. The limit here is that it still needs to be enjoyable for kids to read and a whole paragraph about wainscotting isn't that, so no, your kids aren't going to finish this book and be able to identify a pilaster cap and that's fine. But there's enough that if you really wanted you could use this as a jumping off point for an architecture themed coloring book and be able to point out some things that Iggy saw.

So far we have clear good marks for plot and character development!

Lastly, the issue that some may find problematic but that we found pertinent and interesting: the role of the 1918 Flu. A central plot point in this book is the loss of a character's young daughter to the flu. There is a great line in this book, quoted by another reviewer to substantiate a 1-star review. This quote is part of the reason that we gave this book 5 stars:

"'People can die from the flu, but it's not as common,' said Ada, 'because scientists invented new medicines and vaccines. People used to die of all kinds of diseases like measles and flu. Vaccines changed that. Mr. Mc Clintock at the library said that millions of people around the world died from flue in 1918. MILLIONS!'"

This was the starting point for a great conversation that began when the 4.5 year old asked what measles were. It gave us a chance to explain that there are lots of different kinds of illnesses in the world, but for many of them, we don't really have to worry about them anymore because scientists have come up with vaccines and cures (like Ada says). This was a perfect transition to then talk about the current pandemic, and that one reason that it's still a problem is because we DON'T have a cure or vaccine yet. Then we talked about the fact that scientists are working on them right now, which led to a question about what Ada would do and pretty much opened up a whole big conversation that we put down the book for awhile to have.

A note: you can imagine, again based on the author's previous books, that the talk about disease and death in this book was presented in an age appropriate way. I suppose if you haven't had any conversations about either of those things with your kids then you might want to know that going in so you can plan accordingly! But contrary to some others, we found the treatment of those topics in this book to be very much on point.

Overall, our favorite story out of all the Questioneers books! 5 stars all the way :)

E. Mandel
5.0 out of 5 stars BEST BOOK EVER
Reviewed in the United States on May 16, 2020
Verified Purchase
This is my favorite book I have ever read. If you ever read this book you will see why. READ THIS BOOK!
Read more
Helpful
Comment Report abuse

Christine Schaefer
1.0 out of 5 stars Little architecture info, LOTS of Spanish Flu death.
Reviewed in the United States on May 20, 2020
I've been looking forward to this book for months, and was so excited that I bought two copies.. one for my daughter and one for a gift. TERRIBLE!!! We loved the Ada and Rosie chapter books, both were very science and engineering based (respectively), and the girls used their skills to solve tangible problems. This Iggy book mentions a few styles of architecture, but otherwise has nothing to do with architecture or building (like when he built a bridge in Iggy Peck Architect). It is VERY heavy on ghosts and haunting (not cool in our Montessori (ie reality) based home). But worst of all, two characters die from, wait for it.. the 1918 Spanish Flu! And it goes on to say that "'People can die from the flu, but it's not as common,' said Ada, 'because scientists invented new medicines and vaccines. People used to die of all kinds of diseases like measles and flu. Vaccines changed that. Mr. Mc Clintock at the library said that millions of people around the world died from flue in 1918. MILLIONS!'" Now I have until morning to figure out how to tell my daughter we're not going to read the rest of the book, and until Sunday to find a new birthday gift for a friend.
Read more
8 people found this helpful
Helpful
Comment Report abuse
See all reviews from the United States