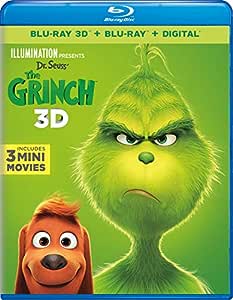 Illumination and Universal Pictures present The Grinch, based on Dr. Seuss' beloved classic. The Grinch tells the story of a cynical grump who goes on a mission to steal Christmas, only to have his heart changed by a young girl’s generous spirit. Funny, heartwarming and visually stunning, The Grinch is fun for the whole family!

4.7 out of 5 stars
4.7 out of 5
6,239 customer ratings
How does Amazon calculate star ratings?
Amazon calculates a product’s star ratings based on a machine learned model instead of a raw data average. The model takes into account factors including the age of a rating, whether the ratings are from verified purchasers, and factors that establish reviewer trustworthiness.

Doberdad
1.0 out of 5 stars Even the Grinch has to be PC today
Reviewed in the United States on December 27, 2018
Saw this week it was released. Fact its out in video the following month is telling. Onviously the people who loved this movie didnt go to see " How the Grinch stole Christmas" because this didnt vaguely resemble the story it was puportedly based on. The Characters, the music, the narrator and Grinch himself were pale imposters to the mildly dark childrens comedy classic.
Right from the start i scratched my head as the charming iconic Dr. Suess rymes and songs were replaced with rap. Whether you are a fan of rap or not, this was not the appropriate venue for rap music. From there it went down hill. Still confused with the back story as the Grinch came from an orphanage with noone in it. This somehow made him " dislike" (strong no bullying theme in this story. I understand we need to teach bullying is wrong but to have to eliminate from movies as if it doesnt exist doesnt accomplish that. Quite the opposite in fact) Since the Grinch is never actually a bully, the change when he realizes its him, not the who's fault, is hardly transcendant and doesnt purport the strong lesson of the real meaning of Christmas, good will toward man.
On that subject, the movie also shifts from the Suessean theme to more political from its characters. While the Who's were cartoon characters and were made to just roughly portray humans, they nevertheless weren't. The story was about everyone, human nature as a whole. This clearly had ethnic undertones, a theme which really had no place in a Childrens cartoon based on a childrens book that wasnt political at all. Having Cindy Lou raised by a single mom was odd and was clearly done as further representation of themes not appropriate to this story.
Life has become too political and "tradition" has somehow become a dirty word. I miss the old days when movies were just an escape and werent meant to "teach" morality.

Kevin H.
1.0 out of 5 stars Awful Remake of a Christmas Classic
Reviewed in the United States on December 1, 2018
This version of the Grinch is awful. They changed too much from the original and very few of the characters are likeable. I never thought it would be possible to make the Grinch without the main character actually being a Grinch. In this version he’s just a confused and lonely guy that lives on a mountain top. Even the narration doesn’t sound or feel like Dr Seuss. I’ll gladly stick with the Jim Carrey version for now.
Read more
114 people found this helpful
Helpful
Comment Report abuse

Rebekah
1.0 out of 5 stars Disappointment
Reviewed in the United States on February 6, 2019
Verified Purchase
Very disappointed in this version of The Grinch! I'm a HUGE Grinch fan & for them to change the movie so much, was a letdown. My husband & I had to force ourselves to finish watching the entire movie. 👎👎
Read more
54 people found this helpful
Helpful
Comment Report abuse

Michael J. Tresca
VINE VOICE
3.0 out of 5 stars Not quite Seuss-ian enough for me
Reviewed in the United States on November 24, 2018
My family is a big fan of the original Grinch movie and the 3D-animated version of Horton Hears a Who. 3D adaptations by necessity draw things out -- although in the case of Horton there was at least two sources of material to draw from. The Grinch doesn't have the benefit of more than one book, and it shows.

Like Horton, The Grinch gorgeously realizes a world where Whos go about their business in amusingly odd ways. It doesn't go quite as far as Horton though, so we don't get Whos of different sizes and the fantastic machinery is mostly limited to the Grinch. This takes away some of the whimsy of the entire concept of Whoville, but more on that in a moment.

The Grinch himself, as voiced by Benedict Cumberbatch, sounds weird. I'm not sure what he was going for, but the Grinch speaks in a nasally whine that makes him unpleasant to listen to. His dog Max is adorable, but that doesn't make up for the fact that the music is mostly terrible.

There's a subplot of Cindy Lou Who (Cameron Seely, who does a better voice acting job than Cumberbatch) with plans to capture Santa Claus so she can ask him to help her single mom. Part of the fun of the film is watching the Grinch's plans and Cindy's move to their inevitable collision.

Speaking of voice acting, Pharrell is the narrator and his lisping cadence also sounds off. With the exception of Seely, it felt like everyone who acted in this movie was deeply uncomfortable with the source material but gave it their best anyway.

The problem may simply be that, compared to the whimsy of the original, The Grinch just never fully commits. When you go Seuss-ian, you go all in -- you either make music rhyme or you don't, you either make the Whos all furry and weird or you don't. The movie had a few funny moments (you saw most of them in the trailer), and fortunately ends on a sweet note while still managing to explain just how forgiving the Whos really are (hint: the Grinch helps make things right beyond just returning everything he stole).

If the moral of the story is that forgiveness is a powerful thing, The Grinch gives us a little more plot to make that forgiveness palatable. My kids gave it a thumbs up. I am not quite so forgiving.
Read more
71 people found this helpful
Helpful
Comment Report abuse

Amazon Customer
5.0 out of 5 stars Awesome movie!
Reviewed in the United States on November 14, 2018
I saw the movie in theaters (didn't buy from here) but I'm considering buying it; it's awesome! It's definitely my favorite version from all The Grinch movies so far. Illumination did an awesome job, and I just think animation is the best way to go with a storyline like this one where the Grinch has a sleigh stealing gifts and other things from an ENTIRE TOWN! If you haven't seen it, please give it a watch. It also has several very life-changing messages in the movie as well. 100% recommend!! :)
Read more
75 people found this helpful
Helpful
Comment Report abuse

This movie has tons of hilarious moments, but it also has beautiful morals, and a very sweet and happy ending. Grinch may seem like a bully at first, but he's actually super lovable and funny. Also, Grinch's dog Max is SO friggin adorable. Grinch even rubs and squishes his dog's cheeks in one scene because Max is so cute. There's lots of great characters throughout the film, such as Cindy Lou Who, her mom, and a cute chubby reindeer.

This was a very fun movie to watch during Christmas. Great writing, directing, and adorable animation. I highly recommend this movie.
Read more
61 people found this helpful
Helpful
Comment Report abuse
See all reviews from the United States

Ken man
5.0 out of 5 stars Fun Movie
Reviewed in Australia on April 5, 2019
Verified Purchase
I purchased this movie for my nine year old Daughter. She loved it and I also found it a fun film. Lots of humour and a good script. 4k and audio quality very good.
Read more
Helpful
Sending feedback...
Thank you for your feedback.
Sorry, we failed to record your vote. Please try again
Report abuse

Monique Kell
4.0 out of 5 stars different purchase options
Reviewed in Canada on October 17, 2019
Verified Purchase
took awhile, but worth it
Read more
Helpful
Sending feedback...
Thank you for your feedback.
Sorry, we failed to record your vote. Please try again
Report abuse