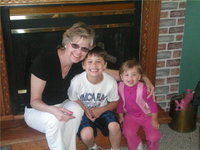 Christine M. Irvin
4.0 out of 5 stars Are you a bright bulb or a dim one?
Reviewed in the United States on March 23, 2011
Illumination Station: The Big Adventure, is written by and illustrated by Jennifer Mauter. The story takes place in the town of Illumination Station, a place with only two streets: one named Commandment Drive and the other Temptation Highway. The first leads those who follow it to a life of peace and contentment while the second leads to bitterness and unhappiness.

All the inhabitants of Illumination Station are lightbulbs of varying designs and intensities. Their power of illumination comes from their being "plugged into" God's word and following his commandments. Those that do shine brightly; those that don't are darkened bulbs.

The story centers around two characters, Wally and Sam. Wally has been raised to love God and follow Him. His family attends church regularly and his parents are leaders in the community. Sam's father yells a lot. His family goes to church, too, but their commitment isn't as strong as Wally's family and they don't always shine as brightly.

Sam loves adventures and Wally loves to follow him. This is usually a good thing, but when Sam leads Wally down Temptation Highway, bad things happen and the boys must face the consequences of making poor choices.

The pencil sketch illustrations are both creative and expressive, and they enhance the text.

What I Like: The story teaches children valuable lessons about responsibility, family values, and the dangers of giving in to temptation and making wrong choices.

What I Dislike: There are some typos in the text. They're not major issues, but they are distracting. And, the author had a habit of starting most of the chapters in the present tense, and then abruptly switching to past tense. Again, it's not a major issue, but it was a bit disconcerting.

Age Appeal: The suggested age group is 9-12. I think that the style of the book, and the way it is written, is geared more to a bit younger audience, more like 7-10.

G. Lundmark
5.0 out of 5 stars A "Teachable Moments" Story for Children
Reviewed in the United States on June 13, 2010
Jennifer Mauter has done a beautiful job of writing a children's book that speaks to the reader about family values, responsibility, temptation and the consequences of making wrong choices. All of the characters in the book are either dim bulbs or bright lights, depending on whether or not they are plugged into God's Word. The two main characters are young boy "bulbs" who live in the community of Illumination Station, a beautiful, neighborly place where people love God and care for each other. Their unhappy experience begins when Sam ignores his conscience and Wally follows him for a ride down Temptation Highway. They each suffer a loss, but are happy to be rescued by Wally's father. The story does not leave a young reader with a sense of defeat, but builds the case for repentance, forgiveness, and restoration. I would have loved having this book to read to my grandchildren when they were younger. "Illumination Station" would also be a great tool for Sunday School, Children's Church, or any type of child evangelism.
by Grace Lundmark, author of "Chloe May, Daughter of the Dust Bowl."
Read more
One person found this helpful
Helpful
Comment Report abuse

Ursula Gorman
5.0 out of 5 stars Review of Illumination Station
Reviewed in the United States on June 1, 2010
The children's book "Illumination Station" by Jennifer Mauter is an endearing book about light bulbs and how following God's word help them shine brightly. This book is geared for young children to help them understand what God's plan for them is and to show them that following God's will helps their own light to shine. The use of light bulbs to show how God can make your `light shine' is creative, wonderful and a perfect way to help children relate to God's message.
Wally and Sam are two residents living in Illumination Station; they are light bulbs and best friends that share a love for God and adventure.
The love of adventure takes them away from Gods word when they make a conscious choice to go against God's, and their parents, wishes. They find themselves faced with temptation that leads them to a scary and dark place full of dimly lit and mean spirited light bulbs, and they themselves start to dim.
Realizing they have made a terrible mistake by not following God's word, they turn to prayer and beg God's forgiveness and protection. The journey that follows is to help them realize that while it isn't easy to avoid temptation, it is the right choice. Doing the right thing helps God's light shine through you and others will notice. God's light shining from Wally and Sam effects those that aren't shining brightly; it gives them the chance to share God's light and love.
"Illumination Station" does a wonderful job of explaining God's love and forgiveness in a moving and understandable story that children will love.

Elaine Littau, author
5.0 out of 5 stars Enlightening
Reviewed in the United States on June 3, 2010
Illumination Station by Jennifer Mauter is a wonderful children's book. The imagination used for the characters is stunning. It is a visually pleasing book as well as a book with an important message for children.
One message was that there are consequenses for wrong actions. The book also showed how beneficial discipline by parents can be. The reader can see that the child who is loved by his parent is instucted and disciplined by his parent. It is a good thing. Illumination Station also shows the reader that mistakes happen and there is a way back to the Light. There is forgiveness and love that is available for everyone. Adults and children will love this book. It is good for personal reading as well as in the children's church or school setting. I highly recommend this book.
Elaine Littau, author of Nan's Journey, Elk's Resolve, and Luke's Legacy
Read more
2 people found this helpful
Helpful
Comment Report abuse
See all reviews