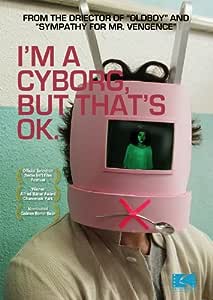 I'm a Cyborg, but That's OK

Young-goon, a young woman who believes herself to be a cyborg, and is institutionalized after a gruesome and nearly fatal attempt to recharge her batteries. Among the characters she meets in the mental hospital is Il-soon, a kleptomaniac who steals not only small items, but entire character traits from the other patients. Young-goon enlists Il-soon s aid to help her discover and complete her purpose as a cyborg, while he finds himself coming to care about her and seeks to find a solution to her troubles that will remain true to her delusion.

4.3 out of 5 stars
4.3 out of 5
76 global ratings
How are ratings calculated?
To calculate the overall star rating and percentage breakdown by star, we don’t use a simple average. Instead, our system considers things like how recent a review is and if the reviewer bought the item on Amazon. It also analyzes reviews to verify trustworthiness.

SB Crumb42
4.0 out of 5 stars The "other" Chan Wook Park Movie
Reviewed in the United States on September 13, 2011
Verified Purchase
Actually 3.5 stars.
After having watched Chan Wook Park's popular and high quality Vengeance trilogy of films, I had to try this one, too, if only because I'd also seen a "favorite film" blurb about it in a UK film mag. I'm happy that this is finally coming out in Region 1 ; I've had to borrow multi-region players for my previous (R3) DVD.

To start with, "Cyborg" is one of those gray area, caught-in-the-middle movies. Either it will be too little for some, or too much for others. Park's fans, used to his dark tone and violence, might find this one too light or too sweet or too awkward a juxtaposition of tones. Others reading its description as a surreal romantic dramedy (which it is, to a point) might be disturbed or turned off by the psych ward setting, the confused narrative, some of the harsher language, the violent sequences, and/or various disturbing themes and subjects that pop up. I'm reminded somewhat of Terry Gilliam's "Brazil," which has a similar love it / hate it divide.

"Cyborg" is the story of a young woman who is, for reasons that are (mostly) explained over the course of the film, absolutely convinced she is a cyborg, talking to electronic appliances and having weird "Terminator"-style fantasies of blasting the orderlies, and licking batteries in the cafeteria. She also has her own cold and cyborg-type philosophy of life, literally illustrated by children's book drawings of "Seven Deadly Sins." She befriends a fellow patient with a history of stealing who likes ping-pong and trading/transferring the problems of the other patients, a bewildering and varied group with many quirks.

The story is inevitably confusing on the first viewing, being told anti-chronologically, surreally, with dream sequences and multiple PoVs, so it takes some patience, a subtle attentive mind, a second viewing, and perhaps an after-movie peek at the film's Wikipedia article to understand what's going on.
Although I found it confusing, I also found it at turns disturbing, illuminating, and sometimes even charming, and so worth seeing. Interesting score, which insists on a comic witty vibe despite the harsher plot elements, and some fantastic visuals, especially the main title sequence.

Ultimately, it's one of those movies you have to try or rent before buying.
Read more
10 people found this helpful
Helpful
Comment Report abuse

cybergal
5.0 out of 5 stars I'm a fan of this movie, and that's o.k.!
Reviewed in the United States on May 5, 2014
Verified Purchase
I stumbled across this film purely by accident and was intrigued enough by the title to make the purchase. I'm glad that I did. It's now on my re-watch list.

This movie is quirky, surrealistic, sad, violent and dramatic while also being the exact opposite at the same time. It's funny, heart-warming, intelligent, and romantic at the other end of the spectrum. For Rain's (aka Bi and real name Jung Ji Hoon - a top Korean singing star) first movie, he did an excellent acting job. He is a kleptomaniac that not only steals physical items, but also steals personalities form people. Of course the other patients at the hospital actually believe that he can steal their personalities therefore they lost those traits' that he "steals". Doing this he helps the main actress throughout the show to cope and survive. He slowly falls in love with her while finding ways to help her get through the trauma that got her hospitalized in the first place.

Some thought the ending was a little unclear, but I thought it was appropriate. You're left with a visual that can be interpreted into many different scenarios. Ultimately, I felt that the director made the right choice with that ending, because you have to remember that this movie is about two young and flawed individuals that have found each other in a mental institution of all places. Who knows what happens to the two of them? I'm glad that I can make up my own "happily ever after".
Read more
Helpful
Comment Report abuse

Matthew
1.0 out of 5 stars It's not "ALL REGIONS," that is a lie, DON'T BUY
Reviewed in the United States on May 7, 2019
Verified Purchase
I've been dying to see this movie since falling in love with the director's work.

Unfortunately I opened my DVD thinking it was compatible with my player (I overlooked its PAL format, my bad) because it states clearly "All Regions." However the DVD case clearly states "Region 2" only so the page technically lied to all of us or the company is unaware of its own products. I'm sure the DVD is fine if your device is Region 2 designed. DON"T BUY thinking it will work on a Region 1 or 3 or 4 (etc) device. If you purchase beware the return policy
Read more
One person found this helpful
Helpful
Comment Report abuse

Jilly
5.0 out of 5 stars Something unique
Reviewed in the United States on August 26, 2014
Verified Purchase
I loved this move. Not only for the strange and delightful characterization, because of the style in which the movie was made. The unusual setting of a mental hospital it becomes the background an odd love story between two patients as they struggle with their own mental illness. There are not wonder cures, no one walk way perfectly into the sunset, but each finds their own peace and each other. This is not One Flew Over the Cuckoo Nest or Harry Met Sally, it is something unique and must be given a chance to shine on its own as most good if not great movies do.
Read more
One person found this helpful
Helpful
Comment Report abuse
See all reviews

Mr. D. R. Green
5.0 out of 5 stars The Transcendence of the Disturbed
Reviewed in the United Kingdom on October 6, 2013
Verified Purchase
I have to confess that, after losing myself in Park Chan-Wook's vengeance trilogy in HD and enjoying "Thirst" just as much on its own discrete and perverse merits, I had been somewhat reluctant to watch my copy of "I'm a Cyborg" on blu ray in case it did not reach those challenging, but ultimately rewarding, highs. Last night, I opened up a can of ice-cold Polish beer, loaded the disc, turned off the lights and just watched it. I need not have harboured any concerns as it turned out. The opening credits alone are a thing of pure beauty and contain more creative and innovative nous than any pre-digested, recycled, items of pseudo-cinematic interest that Hollywood has offered me for years. The transfer flaunts a clarity and tapestry of hues that are, arguably, some of the most overwhelming that I have experienced recently. This alone, matched to a plot that subverts expectations and veers of at abrupt angles, would have repaid the initial investment ten-fold. That is merely the start though. Add in some breathtaking performances by the young Korean leads, backed up splendidly by some of the director's stalwart repertory company of established character actors and the delirium continues.I went to bed with the imagery of the film seasoning my brain and tenderising my imagination. I woke up this morning, made a brew and, as it was still dark, I watched the film again.It gave up yet more of its imaginative treats. There are more to follow I am sure. Funny, disturbing, emotionally rich, evocative, intelligent, awkward, discretly erotic and charming, this film (despite a psychiatric ward setting that might scare off some overly sensitive types)is a rare find. I adore it and, if you bemoan the brainless, pastry-cutter style of contemporary mainstream fantasy and give this a spin yourself, you might enjoy it just as much. I hope so.
Read more
10 people found this helpful
Report abuse

Jake Tuner
5.0 out of 5 stars A New Side To Park Chan-Wook
Reviewed in the United Kingdom on March 29, 2010
Verified Purchase
I'm A Cyborg shows a completely different side to the director of some of Korea's most disturbing psychological thrillers including the critically acclaimed Old Boy and Lady Vengeance, both from Park Chan-Wook's Vengeance Trilogy.

Beautiful cinematography and fascinating characters keep this madcap fantasy alive and you are kept on your toes whilst following the plot as there are many digressions into the surreal. I have a large Tartan Asia / Tartan Asia Extreme collection and this film really takes pride of place and is one of my top 5.
Read more
3 people found this helpful
Report abuse

Vic Cox
5.0 out of 5 stars I am a sideboard.
Reviewed in the United Kingdom on January 28, 2014
Verified Purchase
A beautiful and delicate view. A little ray of light to pop into your brain every now and then. I hope that like me when people see this film they share it amongst friends.
Read more
Report abuse

mr luke hall
5.0 out of 5 stars Five Stars
Reviewed in the United Kingdom on February 4, 2015
Verified Purchase
what an amazing movie. worth a watch.
Read more
Report abuse
See all reviews