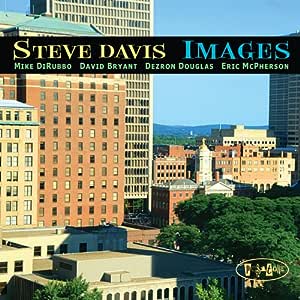 Images is trombonist Steve Davis' love letter to his hometown of West Hartford, CT. The ten pieces he wrote for the album, and which make up his "Hartford Suite," are all dedicated to people or places associated with this geographic region. While Davis' penchant for crisp swing and clear, lyrical lines plays a big part here, some compositional cunning and some pieces that fall outside this general area helps to keep things from falling into a stylistic rut. Dedicated to bassist Nat Reeves, the mid-to-up-tempo swing of "Nato" possesses a persistent, four-note figure that drops in as the parade of soloists pass along. "The Modernist" plays off of oddly placed accents, slightly obscuring an otherwise straightforward feel, while the horns stretch out over some cymbal rolls and arco bass before the music starts to cook on "Twain's World." A phrase with a cycling rhythm leads into the solos here, putting Davis and trumpeter Josh Evans in the spotlight. "J Mac's Way," dedicated to Jackie McLean, features some of pianist David Bryant's most absorbing solo work on the album, while the bass hook at the start of the waltzing "Mode For Miantonomoh" is an instant attention grabber. Bryant's zeal adds a lot to this track, bit its alto saxophonist Mike DiRubbo who is the standout soloist, showcasing his unique phrasing and style. While the first half of the album has plenty to offer, the two tracks that seem to rise above the rest are on the latter half of the recording. Davis admittedly acknowledges the Billy Strayhorn influence on "Rose Garden," a ballad that exudes all of the tender sophistication and class associated with that genius of jazz composition. While Davis and DiRubbo carefully shape their lines to fit the song's mood, bassist Dezron Douglas provides some thick bass notes that hang, seemingly suspended in mid-air, behind them. "Park Street" has an infectiously joyous, party-like vibe, and uses a Latin groove as its rhythmic framework, set behind a 12-bar blues-like progression. All the soloists take things up a notch here, and Douglas' solo is bursting with creative energy. While familiarity with the city of Hartford would probably yield a unique appreciation for this album, the musical images presented here can easily stand on their own. --Dan Bilawsky, All About Jazz

Trombonist/composer Steve Davis was commissioned by the Greater Hartford Festival of Jazz to compose Images: The Hartford Suite, with track dedicated to a contemporary or historical Hartford figure or place. Thankfully, a detailed knowledge of Hartford, Connecticut is not a prerequisite for the enjoyment of this music; the talent and enthusiasm of the musicians accentuate this set of upbeat, positive, swinging tunes. This is the Davis quintet's second album, following Outlook (Posi-Tone Records, 2008). Every member of the band swings with genuine power. Davis plays his trombone with a rich and rounded tone that melds perfectly with the softer tone of Mike DiRubbo's alto. The addition of Josh Evans on trumpet and flugelhorn on tunes such as "Kenney's" adds depth to the overall horn sound. The rhythm section drives everything along with just enough of a push to ensure that the band sounds energetic but never hurried. Eric McPherson's cymbal work is exceptional throughout, his freedom to create intricate and subtle patterns assisted enormously by Dezron Douglas' strong bass lines. Davis credits Billy Strayhorn's influence on "Rose Garden," a slower and more reflective tune with Davis and pianist David Bryant contributing lovely, sparse solos. The tempo may be slow, but it's by no means sad or pessimistic; elsewhere, however, tempos are quicker and the tunes are more overtly positive. Bop influences are also direct not unexpectedly, given that Davis has worked with Art Blakey and acknowledges the great influence of Jackie McLean, to whom he dedicates "J Mac's Way." On "Tune For Calhoun" it's the influence of bebop that has the upper hand; a fast, explosive, number that gives every member of the quintet a chance to deliver effective solos. Kris Jensen adds tenor sax to "Club 880," which creates a real bite and fullness to the horn lines on this up-tempo tribute to the Hartford jazz venue. --Bruce Lindsay, All About Jazz

Steve Davis graduated from the University of Hartford in 1989, where he studied under the tutelage of the master, Jackie McLean. After graduation, Davis soon hit the road with Art Blakey. He returned to Hartford in 1992, and has resided there since. On Davis latest Posi-Tone release Steve honors his home town on Images -The Hartford Suite. What appears to be the Hartford skyline graces the front cover of the CD. Inside, with the limited liner notes, is a mini-map of the town. Images contains my kind of jazz - straight ahead classic hard bop, which retains its luster through repeated listening. Like a Jazz Messengers band, Davis group blends cohesively, with standout drummer Eric McPherson, like Blakey, driving the beat with cymbal work. Once again producer Marc Free, and engineer Nick O Toole, have done a righteous job in getting the sound mix just perfect. There is an audiophile quality warmness that fills the soundstage with near-SACD quality that will be appreciated on a stereo system that highlights midrange acoustics. You will find something to like on every track, whether it be the horn blend on Nato before Davis takes his solo; the relaxing sweetness of The Modernist, ; the unheralded work of David Bryant on piano and Josh Evans on trumpet and flugelhorn; or the visits to the neighborhoods in town described by Davis in his liner notes. Steve honors Nat Reeves on Nato , Jackie McLean on J Mac s Way , and jazz clubs Kenney s and Club 880. A reviewer s dilemma in critiquing a CD like Images is that every track pleases and it is difficult to not describe every track in an overly long review. So, I ll just say that if you love 1960s Blue Note horn-driven hard bop (and most any true jazz LP collector fits into this category), you can t go wrong taking in the Images that Steve Davis brings to the table in his paean to his home town. Now if he only had time to run for mayor. No new taxes, and jazz on every corner... --Jeff Krow, Audiophile Audition

Brian
5.0 out of 5 stars Brilliant song writing
Reviewed in the United States on October 20, 2010
Verified Purchase
This 10 song selection written by Steve Davis "Images-The Hartford Suite" highlights his brillant song writing, surrounded by a very talented group of players that perform the charts with a fresh crisp delivery. First cut, "Nato" bursts right out of the gate, and gives everybody a chance to stretch and warm up."Twain's World" really gives you some idea of Steve's complex thought process and the math involved. The entire Suite is a wonderful ride, taking you through the Latin-American "Park Street" to the neighborhood bar and grill "Kenny's" to end up at the legendary South End Jazz Club "Club 880" I've listened to this suite 50 times already, and get really inspired more and more every time I listen. I highly recommend you take a listen, doubt it will be your last.