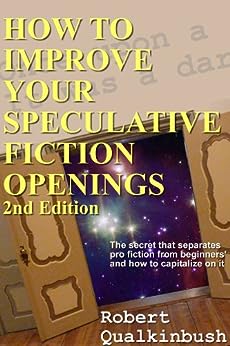 Carol Holland March
5.0 out of 5 stars Great Resource for Spec Fiction Writers
Reviewed in the United States on June 15, 2013
Verified Purchase
One of the most valuable books I've read recently on writing speculative fiction is "How To Improve Your Speculative Fiction Openings" by Robert Qualkinbush. I got in on Kindle when it was first released by Reanimus Press which is run by Andrew Burt of Critters, an online critique group for writers of speculative fiction, but it is now available in print on Amazon.

Qualkinbush analyzes 1400 professionally published short story openings and came up with some interesting trends. First he discovered that 85% of story openings by professionals start with "situational" information or "telling" rather than a scene. He emphasizes how important it is for spec fiction writers to orient their readers to the type of story they are telling in the first paragraph, especially the identity of the POV character.

He also discusses the concept of abeyance--the face that spec fiction readers are willing to figure out, or learn later, unfamiliar concepts that are dropped into the text. The real challenge for writers is where and how to start, and the author suggests starting with the "heart" of the story, which he suggests is determined by the ending. He offers many detailed examples of his conclusions from the stories he surveyed and although this book is very specific and covers only how to organize and start a speculative fiction story, it is packed with useful data. If you've ever struggled between "Showing" and "Telling" for your opening, this is the book for you.

Mutive
4.0 out of 5 stars Short Book, but Full of Good Stuff
Reviewed in the United States on January 11, 2013
Verified Purchase
This book does exactly what it claims to do - explains how to write a decent speculative fiction opening.

As the author clearly illustrates, speculative fiction has some real differences from fiction where we can easily assume a setting and other various features of the world. For this reason, the first few lines *must* help the readers figure out the basic things they need to know in order to get on with enjoying the story. This sounds simple (although I suspect in practice that it's a *lot* harder), but it's well illustrated with close to a hundred examples from spec fiction stories, explaining why and how they work.

As a warning, the book does absolutely *no* more than this. There's nothing on story structure or characterization. There's no conversation on writing style or quality. It's pretty much just about, "How to I write the first paragraph of a story so that someone might read farther?" (It's also fairly short - which I think is a good thing - much longer would have felt kind of drone-y.) But that's an important skill that I'd recommend to any writer, so would definitely recommend that those trying to write speculative fiction read this.

Tall Arizonan
5.0 out of 5 stars Dump all infodumps!
Reviewed in the United States on March 30, 2012
Verified Purchase
Coming up with a compelling way to open a genre story can be a challenge. You've got all of these fantastic ideas and extraordinary characters. Competing for attention, they spill out from your brain onto the paper in front of you like a flood, one right after another.

Hold on! That's not a story - that's a mess! Instead of intriguing your reader, all you've done is give them a migraine. You've committed a common spec fic writing sin: the Infodump!

Using this book packed with many examples of fine genre writing, Qualkenbush lucidly shows you how to mend your errant writing ways - and manages to entertain and intrigue at the same time.

I believe "How to Improve Your Speculative Fiction Openings" was a valuable addition to my collection of writing books. The opener is probably the most important part of the story. If the reader doesn't make it past the opening, they aren't going to make it to the end.

This book has got to be in my personal top five favorite books on writing. Qualkenbush did the work of analyzing a number of pro stories and then a number of amateur stories and found some compelling differences. He's produced a book that's worth studying - not only to understand the successful patterns he notes but also for quality of the writing samples.
Read more
3 people found this helpful
Helpful
Report abuse

W. Wight
5.0 out of 5 stars Great Beginnings
Reviewed in the United States on March 30, 2012
Verified Purchase
This book was a real eye-opener. I had no idea that beginning speculative fiction writers were doing the opening paragraph(s) of their work incorrectly. Thanks to this book, I can see how important the first few sentences really are and how to make them grab the reader and draw them into the work. Robert Qualkinbush shares his excellent research and presents it in a very meaningful way. His writing is concise and gets right into the meat of his subject. What Robert has to say should be important to every wannabe writer. I found it packed with many great ideas.
Read more
3 people found this helpful
Helpful
Report abuse

Raymund Eich
5.0 out of 5 stars a lot of openings studied, so you don't have to
Reviewed in the United States on September 26, 2013
Verified Purchase
I admire the effort Qualkinbush put into analyzing showing versus telling, and focusing reader interest, in the openings of spec fic stories. He also did good work in explaining why spec fic has different requirements in openings than other genres. If you're not sure why your spec fic isn't selling, this book will help you check if your openings are the culprit.
Read more
Helpful
Report abuse

MushyLightBubble
4.0 out of 5 stars Good analysis with actionable tips
Reviewed in the United States on March 14, 2013
Verified Purchase
Short and focused: this book analyzes what is different about spec fiction openings and how to handle this challenge. Lots of examples from published works with useful line by line breakdown of many.
Overall, a great resource that covers the grand concepts and the details. Again, it is short, though. A good value as a cheap e-book, perhaps a bit much at the print price.
Read more
Helpful
Report abuse

Michael DiCerto
5.0 out of 5 stars Five Stars
Reviewed in the United States on September 5, 2015
Verified Purchase
Some very, very helpful advice that I will incorporate in my manuscript. Tons of examples,
Read more
Helpful
Report abuse
See all reviews

Chris Baker
5.0 out of 5 stars Very useful analysis of how successful writers start their stories
Reviewed in the United Kingdom on January 5, 2018
Verified Purchase
'What's going on?' 'Where are we?' 'Who is speaking?' 'Who is this character and what are they like?' are all questions that better be answered at the opening of a story, before readers get bored or confused. Or, of course, the story teller may want to be deliberately misleading, but not in a way that later seems unfair on the reader when the plot is twisted. In speculative fiction (fantasy, science fiction, horror etc.) this general problem is exacerbated: maybe the character we've just been introduced to is not human, and the action takes place in a made-up location with a made-up history or features. Lastly, speculative fiction is often about an idea - for example, what if someone could become invisible, or travel in time? - so that is queuing up to be explained too.

Rather than simply opining about what *he* thinks you ought to do, Robert Qualkinbush offers a large selection of published story openings, mostly from well-known publications. These are analysed, and sometimes given as an alternative version to show what breaks if you change things. It is a fine way to present the subject
Read more
Report abuse
See all reviews