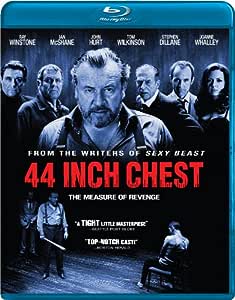 Save with Used - Very Good
$8.95
FREE Shipping on orders over $25.00 shipped by Amazon.
Arrives: Tuesday, Feb 2
Ships from: Amazon
Sold by: Collectiblecounty

How far would you go to avenge betrayal? Colin Diamond (Ray Winstone, Sexy Beast) is about to find out in this gritty, provocative thriller. After he breaks down over the dissolution of his marriage, he kidnaps his wifes lover, and his rage pushes him to the brink of murder as his motley crew of buddies urges him to exact brutal revenge. Ian McShane (HBOs Deadwood), John Hurt (V for Vendetta), Tom Wilkinson (RocknRolla) and Stephen Dillane (Spy Game) unforgettably co-star in this compelling story that contemplates the nature of love and asks what it takes to be a man.

The writers behind Sexy Beast, David Scinto and Louis Mellis, pick up where they left off in 44 Inch Chest. Ray Winstone stars as Colin Diamond, a gangster with some fiercely protective friends. There's mercurial Mal (Stephen Dillane, The Hours), mama's boy Archie (Tom Wilkinson, The Ghost Writer), velvet-voiced Meredith (Ian McShane, Winstone's Beast-ly costar), and a misanthropic, marble-mouthed piece of work named Old Man Peanut (John Hurt at his greasiest). When Liz (Joanne Whalley, Scandal), Colin's wife of 21 years, reveals that she's leaving him for French waiter Loverboy (Melvil Poupaud, effective in a thankless role), Colin's pals decide to teach the lad a lesson. After they kidnap Loverboy, lock him in a wardrobe, and encourage Diamond to do his worst, photographer-turned-filmmaker Malcolm Venville flashes back to the previous evening's events (at least those concerning Colin, Liz, and Meredith). Mood lighting and rain-slicked streets aside, the film feels stage-bound due to the minimal establishing shots and David Mamet-like dialogue, including a self-deluding disquisition on marriage (to Colin, it means letting Liz "watch what she wants on the telly"). While Winstone's broken, yet brutal turn recalls his performance in Gary Oldman's Nil by Mouth, 44 Inch Chest starts out like a Guy Ritchie-style lark before heading off in a deeper direction. Those who look to British cinema for refinement and sophistication may wish to look elsewhere, but those who prefer the grit of Mike Hodges to the grace of Merchant Ivory would do wise to give this one a go. --Kathleen C. Fennessy

3.5 out of 5 stars
3.5 out of 5
194 global ratings
How are ratings calculated?
To calculate the overall star rating and percentage breakdown by star, we don’t use a simple average. Instead, our system considers things like how recent a review is and if the reviewer bought the item on Amazon. It also analyzes reviews to verify trustworthiness.
Top reviews

Josiah
5.0 out of 5 stars Good, slow study of the choices that a man ...
Reviewed in the United States on July 12, 2017
Verified Purchase
Good, slow study of the choices that a man who sees himself as a "tough guy" must make, having been reduced to a weeping puddle by his unfaithful wife. Still thinking about this one. A lot going on, on a lot of levels. Drags some during the handful of hallucination scenes, but those are over pretty quickly. Ray Winstone does a great job. Solid, magnetic actor, pathetic and threatening all at the same time. This must have been based on a play. It has that introspection about it. Heads up though: turn on the subtitles for this one.
Read more
7 people found this helpful
Helpful
Report abuse

Mark W
5.0 out of 5 stars Way Better Than People Give It Credit For
Reviewed in the United States on January 25, 2017
Verified Purchase
A way too frequently overlooked gangster film with a touch of something more. I can understand why it wouldn't be everyone's cup of tea; if you were to go in expecting Lock, Stock and Two Smoking Barrels, or Gangster No. 1, you are going to be more than a little disappointed. But if you want something more rounded that will surprise you, this is the movie for you.
Read more
6 people found this helpful
Helpful
Report abuse

Laser Point
1.0 out of 5 stars Oh shut up
Reviewed in the United States on September 21, 2019
Verified Purchase
Bunch of hoodlums in a room. One of them has just discovered that his wife is unfaithful and intends to leave him for her lover. The rest of the movie is the other hoodlums commiserating with their friend and encouraging him to kill his wife's lover. TALK TALK TALK. Ray Winstone and Ian McShane are charismatic actors but they can't save this terminally boring film.
Read more
Helpful
Report abuse

Amazon Customer
5.0 out of 5 stars were you sleeping?
Reviewed in the United States on January 24, 2020
Verified Purchase
ah...the perfect love story.oh wait ,you thought 'love story'was the 'perfect' one! dude!
Read more
One person found this helpful
Helpful
Report abuse

C.Wallace
3.0 out of 5 stars Colin's Bad News
Reviewed in the United States on April 30, 2010
Verified Purchase
This film is about Colin Diamond (Ray Winstone), who is informed by his wife of twenty-one years, Liz (Joanne Whalley), that she has "met someone else." She's not talking about a new manicurist who really understands her nails. This news hits Colin where it hurts.

Colin doesn't take it like he's supposed to, according to society's laws. That is, he doesn't decide to just move on and sigh "C'est la vie." He beats her severely and she ends up having to jump through a glass door and crawl away to escape.

Turns out Colin has some rough and ready friends who kidnap Liz's lover, assault him, and lock him in a wardrobe. These are men who are fiercely loyal to Colin and seem to be willing/eager to kill Liz's lover if Colin so desires. The implication is that they are aging gangsters who go way back together. They conduct a mock trial of "Loverboy" in what appears to be an abandoned building located in a dark and seedy part of London.

Throughout, the "trial" is mixed with fantasies and flashbacks. There's a bit about Colin's anguished dreams. The acting is solid, with John Hurt giving a great interpretation of the Samson and Delilah story. But there's just too much profane chatter. The sets are too stark and lifeless. Yet, primarily due to the sterling cast, the film takes on a very heavy theme and comes off fairly well.

Tom
4.0 out of 5 stars If you like the actors
Reviewed in the United States on August 22, 2019
Verified Purchase
Good movie , could have been better
Read more
One person found this helpful
Helpful
Report abuse

Kindle Customer
4.0 out of 5 stars Pretty good
Reviewed in the United States on July 23, 2016
Verified Purchase
Not bad, not amazing, Ray Winstone and many others...Hey, he is sexy, all you know it too...Yeah, you buddy over there acting tough, you just thought of him in the yellow speedo...I know you did....Good movie, though. A good​ way to pass the time on a down night.
Read more
One person found this helpful
Helpful
Report abuse

David E. Baldwin
4.0 out of 5 stars Love and Betrayal Geezer Style
Reviewed in the United States on August 5, 2012
Verified Purchase
Colin(Ray Winstone),an ordinary bloke, comes home from work to be confronted by his wife, Liz(Joanne Whalley), that she's leaving him for another man. Colin is devestated. He lays on the floor in a drunken stupor amongst the rubble that is left in the wake of the aftermath of Liz's announcement. Colin's mates upon hearing the news go into action. They kidnap Liz's loverboy take him to a furnished warehouse, bind and gag him and stuff him in a wardrobe. They leave Colin alone with the interloper and tell him to do what he will. Colin's actions come as something of a surprise but, then, they really shouldn't. The makers of the film make some pretty cogent observations about love, betrayal, and the male ego. Colin's friends are basically working class but are across the spectrum as personality types none more amusing as the blunt old coot played by John Hurt. This is Winstone's show, though, and he is terrific as a man barely holding together ready to explode. It's not a perfect film but quite an interesting one. The film's title, for those who are curious, refers to a chest of drawers containing the remnants of Colin and Liz's marriage and not the size of a woman or man's bosom.
Read more
6 people found this helpful
Helpful
Report abuse
See all reviews

Seeker
4.0 out of 5 stars A film wth lotsa verbals, innit?
Reviewed in the United Kingdom on October 22, 2016
Verified Purchase
With a fantastic lineup of English actors (John Hurt, Ray Winston, Tom Wilkinson, Ian McShane ...) it was definitely a must see movie and with 'the main geezers giving it large' throughout, it didn't disappoint. The action is mainly set in flashback, with the present being set in one drab room where the protagonists discuss the fate of their captive.
The dialogue is brilliant in revealing the individual characters and the wordplay keeps the tension high throughout.
Definitely worth watching - it came across to me as being in the same league and style as the original 'Sleuth' movie.

Derek Stocker
1.0 out of 5 stars Not what I expected...
Reviewed in the United Kingdom on September 15, 2019
Verified Purchase
To me this was as bad as "Sexy Beast" unsuprisingly both from the same stable.
Well known performers wasted in a confusing and disappointing production.
Ray Winstone is worth more than this.
Read more
One person found this helpful
Report abuse

Amazon customer
5.0 out of 5 stars good film
Reviewed in the United Kingdom on March 22, 2019
Verified Purchase
I still enjoy this film, even though Mr Winston isn't the best one, in my opinion I would say Ian McShane and John Hurt are the stars and the reason I keep watching, they are awesome in it
Read more
Report abuse

jessica.s.c
3.0 out of 5 stars seller good and quality good, movie crap
Reviewed in the United Kingdom on December 22, 2016
Verified Purchase
arrived on time. Product itself was good but despite a great cast I think this film is terrible. It's boring, and convoluted, it's basically Ray Winstone running around, getting angry and crying for 2 hours. It almost seemed like it was meant to be a play rather than a movie.... a boring play,
Read more
Report abuse

A. Dunn
2.0 out of 5 stars Not a patch on "Sexy Beast"
Reviewed in the United Kingdom on August 10, 2013
Verified Purchase
I wonder if they wrote this before "Sexy Beast" - when they were trying to cut their teeth as writers. I say this because whereas I could see the influence of Pinter, Mamet, Albee etc poetically and superbly realised in "Sexy Beast" this film was self-indulgent to say the least; great actors enjoying the words with relish but all of it adding up to an esoteric exercise in drama school.
Read more
Report abuse
See all reviews