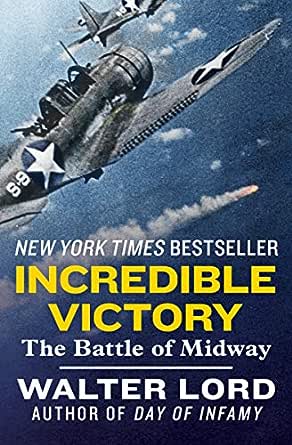 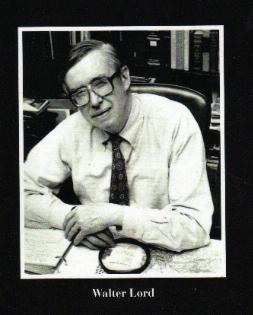 “Graphic and realistic . . . not an impersonalized account of moves on the chessboard of war, [but] a story of individual people facing crucial problems.” —The New York Times
“[Lord uses] a kind of literary pointillism, the arrangement of contrasting bits of fact and emotion in such a fashion that a vividly real impression of an event is conveyed to the reader.” —New York Herald Tribune
“Walter was a giant, there is no other way to describe him.” —John Maxtone-Graham, author of Titanic Tragedy

Walter Lord (1917–2002) was an acclaimed and bestselling author of literary nonfiction best known for his gripping and meticulously researched accounts of watershed historical events. Born in Baltimore, Lord went to work for the Office of Strategic Services during World War II. After the war’s end, Lord joined a New York advertising firm, and began writing nonfiction in his spare time. His first book was The Fremantle Diary (1954), a volume of Civil War diaries that became a surprising success. But it was Lord’s next book, A Night to Remember (1955), that made him famous. The bestseller caused a new flurry of interest in the Titanic and inspired the 1958 film of the same name. Lord went on to use the book’s interview-heavy format as a template for most of his following works, which included detailed reconstructions of the Pearl Harbor attack in Day of Infamy (1957), the battle of Midway in Incredible Victory (1967), and the integration of the University of Mississippi in The Past That Would Not Die (1965). In all, he published a dozen books.

With an extraordinary paperback selling track record of 230,000 copies sold, this is the definitive and compelling account of the Allied battle and victory at Midway in June 1942. --This text refers to an out of print or unavailable edition of this title.
Read more

4.7 out of 5 stars
4.7 out of 5
645 global ratings
How are ratings calculated?
To calculate the overall star rating and percentage breakdown by star, we don’t use a simple average. Instead, our system considers things like how recent a review is and if the reviewer bought the item on Amazon. It also analyzes reviews to verify trustworthiness.
Top reviews

Mike Whitfield
5.0 out of 5 stars Exciting and fairly thorough account of the most important naval battle of the war
Reviewed in the United States on October 14, 2016
Verified Purchase
I also own this book in paperback. I've read it many times and as much as I'm left wanting more, this is the best account I have read. Shorter accounts do not make clear the contributions of all the types of planes. Only the dive bombers did any real damage, seemingly ending the Japanese threat singlehandedly. However, Lord's minute by minute account, together with the Japanese decisions and the thinking behind them, make clear how truly effective were these fruitless attacks. The delays introduced by doomed attacks by gallant men in hopelessly obsolete aircraft carrying virtually useless torpedoes and laughably useless fighters, and the ineffective attacks by equally gallant men in state of the art bombers hampered by obsolete tactics, are what caused the Japanese to lose opportunities and exhaust their excellent air screen. This set up the opportunity which the dive bombers used to destroy three of the four huge carriers in the main attack before the Japanese fleet could strike the badly outnumbered American fleet, or even strike a truly powerful blow against Midway itself.

The American code breakers also get their due. Most of the attention in World War II cryptography centers on the British breaking the Ultra encryption (and usually neglects the Poles who made this possible), but without the American naval code breakers, the great gamble of Midway could not have been risked.

All in all, one will not find a better book on Midway, and damned few better books on any aspect of the war.

Steuman
5.0 out of 5 stars Sometimes Everything Goes Wrong Exactly the Right Way
Reviewed in the United States on March 8, 2017
Verified Purchase
If you ever get the chance to see a list of the ships that Imperial Japan lined up for the Battle of Midway and compare it with the entire Pacific Fleet available to the United States for that battle, you'll find it inconceivable America won. But for a defective radio on a Japanese spotter plane and a badly coordinated first strike that somehow worked out perfectly, America would almost certainly have lost this fight based on the sheer numerical superiority of Japan. Much of America's larger fighting ships were still being pulled off the bottom of Pearl Harbor. One of the three surviving US aircraft carriers had been badly damaged. It was patched back together and tossed into the fight so quickly that Japan still had it listed as probably sunk. It scarcely mattered to them. With such overwhelming power Japan was in position to deal a knock out blow to America's Pacific Fleet and cement their Pacific Empire in place.

For the definition of American hero, look no further than the men of Torpedo Squadron 8, but don't expect a tale of glory. They didn't hit a single ship--and even if they had it's likely their torpedoes would have failed to detonate thanks to faulty design. As a matter of fact, all of Torpedo Squadron 8 was shot down and only 1 man survived. Why are they heroes? Because even when they realized they had arrived early and had no fighter cover and no dive bombers to coordinate their attack with, they still turned their planes into the teeth of the mighty Imperial Japanese Navy and pressed forward with a hopeless attack. Turning back was not an option. Every cell in their bodies must have screamed "RUN!" but they knew if they headed for home the Japanese would follow them back and locate the American Fleet. It's not hard to imagine that they thought of their loved ones at home as they turned their planes into the enemy guns and attacked. When the other torpedo squadrons arrived and found the same situation, they attacked too. Everyone knew what was at stake. There would be no second chances. Not one torpedo hit a Japanese ship. It was such a slaughter that Japanese fighters broke air cover and dove down to pick off the easy targets---leaving a gaping hole in the Japanese Fleet's air defenses. Within minutes American dive bombers, which were supposed to have arrived earlier to coordinate their attack with the now destroyed torpedo squadrons, exploited that hole and changed the world.

Incredible victory tells this and many other improbable stories from the Battle of Midway. Walter Lord is a master of setting the stage and following the American and Japanese players who act upon it as history bind them together. His books are easy to read and flow quickly towards the main events. You'll find first person accounts from both sides, maps, pictures and diagrams and plenty of facts and figures. But it's the human stories, sometimes touching, sometimes frightening, sometimes silly and often sad, that make the Battle of Midway come alive. The American victory at Midway was so improbable that even knowing the outcome in advance you find yourself unable to believe it. Every American owes it to the men who fought this battle to read this book and know their stories. This was the Greatest Generation, and Walter Lord makes it easy to see why.
Read more
30 people found this helpful
Helpful
Comment Report abuse

Robert A Keown
5.0 out of 5 stars The US could read enough of their content to get a good grasp of the Japanese battle plan
Reviewed in the United States on November 5, 2016
Verified Purchase
This book is outstanding in the way it examines the assumptions each side made about the other and how those assumptions affected the way they each prepared for the encounter. On the Japanese side they assumed that their encrypted radio communications were secure when they were not. The US could read enough of their content to get a good grasp of the Japanese battle plan. The next obvious flaw in the Japanese preparation came when they 'gamed' their plan. The Red team (US) suddenly gained an advantage and the referees over-ruled it. A better approach when gaming is to allow everything to run to its conclusion then go back and see why that advantage was gained, then replan to avert the possibility of being bested in those circumstances. On the US side once they were in engagement with the enemy they made a very bad decision in commiting torpedo bombers to attack the Japanese carriers. Torpedoes which could attain 33 knots versus carriers which could attain 29 knots when the carriers possessed a withering low level air defence system was never a viable attack option which the US discovered to their detriment when few if any attacking aircraft returned. The Japanese meantime had made a decision to re-role their air defence fighters to an attack role so left their fleet without air defence. At that point the US dive bombers arrived and within a very short period dispatched all 4 Japanese carriers to 'Davy Jones locker' .This book contains enough lesson in tactics,planning, and execution, that it should be in the library of every military training school and staff college. A well written analysis of a unique battle.
Read more
21 people found this helpful
Helpful
Comment Report abuse
See all reviews

Chris
5.0 out of 5 stars Excellent account
Reviewed in the United Kingdom on August 2, 2020
Verified Purchase
Very good and detailed description of the Battle of Midway. First hand accounts of those actually involved in the battle nicely interwoven into the minute by minute and hour by hour details of the battle. Anyone interested in the Battle of Midway should read this book.
Read more
One person found this helpful
Report abuse

Claudiu
5.0 out of 5 stars Five Stars
Reviewed in the United Kingdom on July 28, 2017
Verified Purchase
This is my favorite book on the subject and one that I've always enjoyed reading and re-reading
Read more
3 people found this helpful
Report abuse

Amazon Customer
3.0 out of 5 stars No dust cover
Reviewed in the United Kingdom on July 14, 2020
Verified Purchase
Half of the pleasure of having an OLD book is the original dust cover. From the illustration above it will be clearly seen that a 'dust cover' was clearly implied. However, on receipt of the book it was not there.
Read more
Report abuse