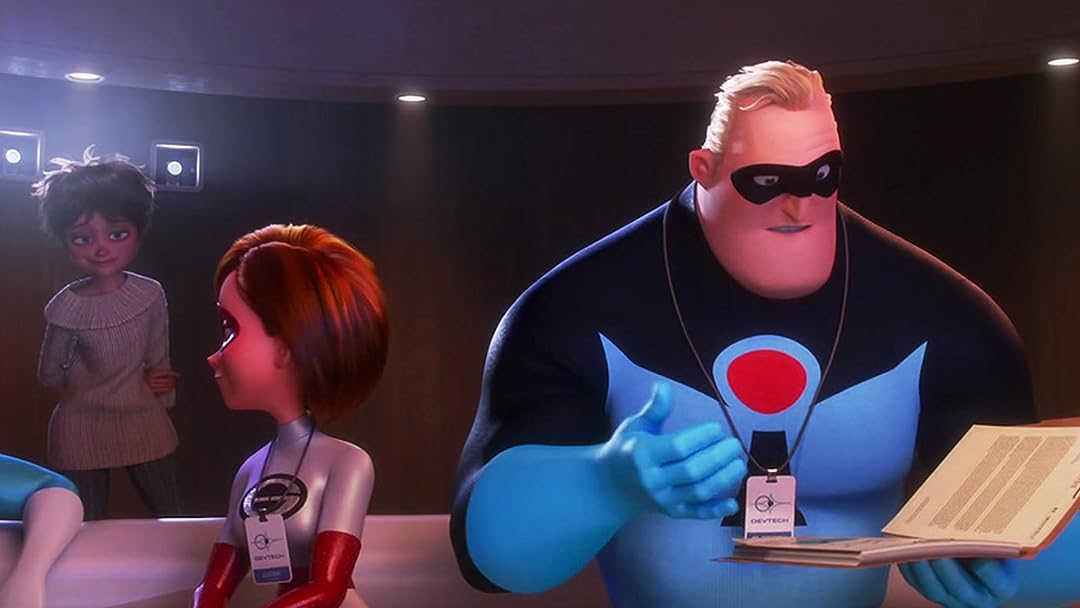 Blaklyn LivelyReviewed in the United States on November 1, 2022
5.0 out of 5 stars
Cutest movie!
Verified purchase
We watched this 1.5billion times....my kids are obsessed!!! Such a cute family movie that provided lots of laughs

joel wingReviewed in the United States on July 30, 2019
5.0 out of 5 stars
Incredibles return to question gender roles and unintended consequences of super heroes
Verified purchase
The first Incredibles had two important themes. The first it flipped the classic super hero story and turned it on its head. Instead of being about the supers doing their thing, it was about them being robbed of that life and trying to deal with their alter egos as regular people. That was also a critique of the middle class American lifestyle and it found it wanting.

Incredibles 2 starts when the first left off with the Underminer attacking the city. This one also has two themes. The first is about the equality of the sexes as Elastigirl is picked to promote the return of the supers that had been outlawed which creates a huge amount of jealousy on the part of Mr. Incredible. That also allows a play upon the gender roles in society as Elastigirl is out getting all the fame fighting crime while Mr. Incredible has to be a stay out home dad and struggles mightily in that function. The second theme is about the unintended consequences of super heroing. The rich duo of Winston and Evelyn Deavoer lost their parents to thieves because they called a super instead of the police while they were being robbed. Evelyn never forgave the super hero community for their deaths. That issue is brought up right at the start of the movie as the city blames the Incredibles for all the destruction that occurred with the fight with the Underminer, and tell them they should have done nothing rather than taken action against the villain.

Incredibles 2 plays upon a lot of the dynamics of the first one as well. There’s the Incredibles’ family with Violet thinking about boys, Dash wanting to show off, and Jack Jack coming into his powers. There’s plenty of comedy s well. For example when Jack Jack chases after a racoon in the backyard and comes out with all his different powers like phasing through objects and laser eyes is hilarious. Of course, the action is top notch as well.

This was a fitting sequel to the original Incredibles. It was still fresh and original and great fun to watch.
C

sixthreezyReviewed in the United States on March 7, 2019
5.0 out of 5 stars
Incredibles 2 - On Parr With the Original
Verified purchase
After a very long wait, Incredibles 2 is finally here. All of our favorite characters are back and better than ever. More defined and with experience, the Incredible Parr family is in hiding after supers continue to frowned upon by society. Frozone returns (my favorite!) and even The Underminer who ended the first film as a new villain that the Incredibles would have to fight. I really love the clever ideas they come up with for the villains, and that's what makes this movie cool.

The villain is Screenslaver, he can make you do whatever he wants at the flip of a screen. Once you're eyes are set to his frequency, you are completely in his control. I thought this was cool because just like the Underminer, who undermines things, his name is clever and funny but relate to his powers. It's very classic super hero genre, which is what this movie serves up on a platter, but it's really funny for kids too.

All of the Incredible family members get a turn to shine. Bob and Helen switch roles in this movie, and the father of the family learns how to deal with his incredibly wild children. Violet, who is the moody teen of the family, really has some great moments at the beginning and end of the film relating to her relationships at school. Dash is constantly funny throughout, but Jack Jack steals the show. With a showcase of superpowers, Jack Jack's battle with a raccoon is sure to be one of the most classic Pixar scenes for years to come.

The Special Features were great on this release, and included an interesting commentary that was a bit of a surprise. I thought it would heavily feature Brad Bird and his thinking behind what went into the movie. Instead, he starts out by introducing himself and then stating that movie commentaries are rarely done by the animators for these films, and then without hesitation brings in 5-6 animators to commentate the film without him. It's cool for a good portion of the commentary, but in many moments drags because it specifically focuses on the animation.

While it's cool to hear about how things were animated, and the work that goes into each scene, it was a little disappointing not being able to hear about other things from the film. Where certain ideas came from and any easter eggs that are surely sprinkled throughout, or just motivations of characters, reasoning behind scenes, etc. It was a classy move by Brad Bird though so either way this release is INCREDIBLE and I highly recommend it. The animation has come a long way since the original and is really apparent in Frozone's powers and in the battle scenes.

My case came in perfect condition with 4K, Blu-ray, and digital copies. Highly recommended movie for the family, fans of superheroes, and action/comedy.
13 people found this helpful

Richard J. WayReviewed in the United States on September 11, 2022
5.0 out of 5 stars
What fun!!!
Verified purchase
Laughed for hours!
One person found this helpful

Phillip CardonReviewed in the United States on September 10, 2022
5.0 out of 5 stars
Great product!
Verified purchase
Great product!
One person found this helpful

K. NelsonReviewed in the United States on June 11, 2022
4.0 out of 5 stars
Movie
Verified purchase
I liked it
One person found this helpful

SteveReviewed in the United States on June 27, 2020
5.0 out of 5 stars
Excellent Sequel
Verified purchase
Sequels are very difficult to do. The story is told already (one of the reasons Walt Disney never did sequels), how do you add more story? Besides story itself, the other issue with sequels is how much do you change the ending of the prior story in order to get a new story? Are the happily married couple get divorced? Was there a death of a well liked character? What do you have to do to generate a new story?

One benefit The Incredibles has is that besides being a stand alone story, it is also a super hero story and a spy story. Both of the those genres are ripe for being sequels without modifying the prior ending (think of all those James Bond movies). All of this plays into being able to come up with a good story without ruining the prior story. And this is where Incredibles 2 succeeds. It has a new story, a very good stand-alone story and does not ruin the prior story. You end up with a story that could easily have existed without having to watch the prior one (yes there are references to some things, but very minor).

The story really has 2 parts, Elastigirl's attempts at keeping heroes relevant (and who the villain might be) and the growth of Jack-Jack and the humor that goes with raising him. The 2 parts are melded together in a fun story that continues the quality of the first movie.
One person found this helpful
See all reviews
Back to top
Get to Know Us
Make Money with Us
Amazon Payment Products
Let Us Help You
EnglishChoose a language for shopping. United StatesChoose a country/region for shopping.
© 1996-2022, Amazon.com, Inc. or its affiliates