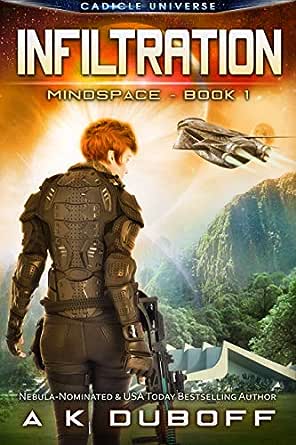 You've subscribed to Mindspace! We will preorder your items within 24 hours of when they become available. When new books are released, we'll charge your default payment method for the lowest price available during the pre-order period.
Update your device or payment method, cancel individual pre-orders or your subscription at
Your Memberships & Subscriptions
There was an error. We were unable to process your subscription due to an error. Please refresh and try again. 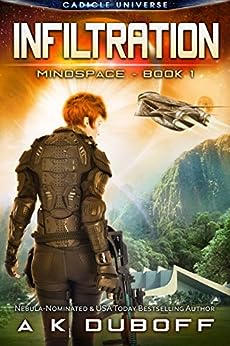 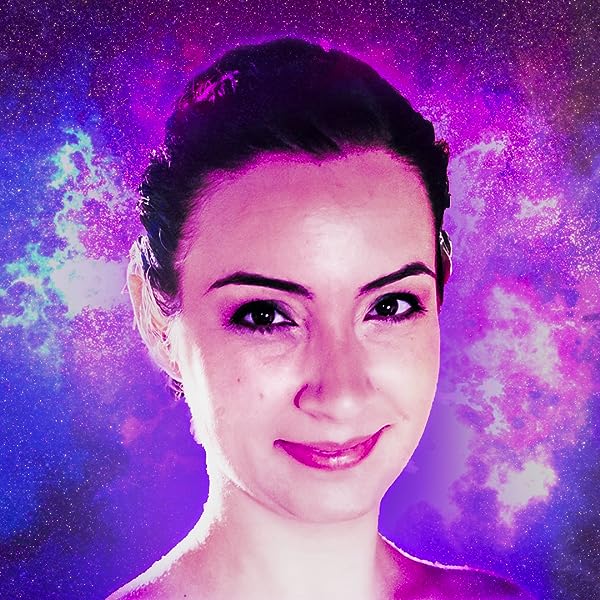 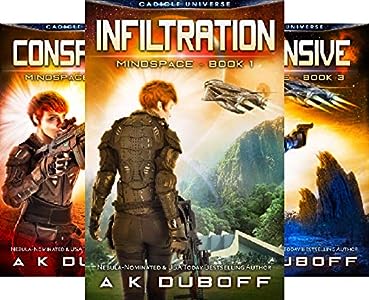 Set in the Cadicle universe, Mindspace is a new standalonestory arc set after the events in the original Cadicle series and before the Taran Empire Saga.

Chris
4.0 out of 5 stars Back to a Universe I love....
Reviewed in the United States on January 21, 2019
Verified Purchase
Last year I read the full Cadicle series and really fell in love with it so I was extremely excited to dive into this series knowing that we would be revisiting that universe. This time around we meet new characters and the story centers around the Tararian Guard, more specifically Capt Kira Elsar...the Guards's only Telepath. The book thrusts into action immediately and we get to meet Kira, and her spec ops team, in their element. Stories that contain groups (or teams) of characters, the first thing I look for is the banter between them. How they interact and what kind of relationships they have. Right away I was happy with Kira's personality and her team...Ari, Nia and Kyle. They were fun to "watch" in action and to hang out with after. It's a good way to get me invested in the characters and at this point, early on....I was invested.
Now the gist of the story is the Guard are checking into illegal experiments by a company called MTech and stumble upon a much bigger conspiracy as they realize the company is trying to create a hybrid type super soldier. Part of the investigation takes Kira back to her home-world (where leaving to be part of the Guard was a sore subject) and she's reunited with her old love Leon..who she left behind to join the Guard. I really enjoyed their interaction and could feel their chemistry.
Leon works for MTech (not knowing they are the bad guys) and he's Kira's way to get in to their new facility on Valta and investigate Monica...the big bad of this book.
There is a lot of great action and intrigue in this book with some really cool characters. I thoroughly enjoyed reading it and getting to know these new characters. If there is a downside it would be the fact that while they do mention the TSS and the Bakzen War it just doesn't feel as connected to the Cadicle series as I'd hoped. No mention of the Sietinen's and the Guard here felt very different from how the Guard was portrayed in the Cadicle series. No this doesn't take away from the book but I feel those things could add a little something for those who read the previous series.

Alan McDonald
5.0 out of 5 stars Take this ride, it’s very exciting!
Reviewed in the United States on January 7, 2019
Verified Purchase
This is book one in a new series set in the Cadicle space opera universe.
This is my first foray into Cadicle stories.
This is actually part sci-fi, part mystery, part private detective and all very exciting.
With illegal experimentation, assault mechs, nanotechnology, aliens and action everywhere, our protagonist, who happens to be special, and not just to her mother, has to figure things out fast if she’s to stop a civil war. Now that’s the only kinda spoiler I’m gonna give. The rest is up to you, but let me say that you’ll want to take this ride.
Thank you Ms. Duboff for a wonderful tale.
I look forward to more.
Read more
5 people found this helpful
Helpful
Comment Report abuse

Eric H
4.0 out of 5 stars Fresh story with great humor
Reviewed in the United States on January 10, 2019
Verified Purchase
Infiltration is an enjoyable easy read with believable characters and great humor. It jumps immediately into the action to grab the readers attention. I found it a bit busy at the start due to the number of characters and understanding the interrelationships between the different pieces of the story but this was cleared up as I read on. I found myself laughing out loud a few times. Great cliffhanger, can’t wait for the next one!
Read more
4 people found this helpful
Helpful
Comment Report abuse

dbayly
1.0 out of 5 stars comic book space opera without the benefit of pictures
Reviewed in the United States on June 22, 2019
Verified Purchase
This appears to be a free prequel intended to introduce a key character to a series. Kira, is a team leader of a black ops group - the Guards - who are the behind the scene goodies in the galaxy. Kira comes from a planet where some humans mysteriously are telekinetic/telepathic. She is telepath as well as a kick ass fighter, young, beautiful and absurdly lucky. The Guards have the best technology but are unable to explain physic powers , even though orange glowing eyes come with telekinetic power. An evil corporation however does have the science, compliments of a rogue agent. Cue inept penetration op by Kira into the evil corporation, with minimal tradecraft and maximum lucky breaks. And she finds her left behind lost love and hooks up with him. So predictable, so inane, such poor writing. The missing pictures might have made it bearable
Read more
One person found this helpful
Helpful
Comment Report abuse

John Piper
5.0 out of 5 stars Awesome new series!
Reviewed in the United States on January 9, 2019
Verified Purchase
I absolutely loved this book! I'm a big fan of Amy and the Cadicle universe! This new series is a great addition to it! Incredibly well written, hilarious, and action-packed! I highly recommend checking it out! Read the main Cadicle series for background on this one. It's worth it!
Read more
3 people found this helpful
Helpful
Comment Report abuse

Jeannecf
4.0 out of 5 stars Good series
Reviewed in the United States on March 29, 2019
Verified Purchase
Although it has more tactics and fighting than I !ike, this book starts the series off well. The characters are well written and the planet Valta is intriguing. I'm looking forward to seeing more about the citizens and their unique gifts. I like the way the book is starting to tie into the Tararan Empire, after the fall of the priesthood. Now on to the next book!
Read more
2 people found this helpful
Helpful
Comment Report abuse

Kindle Customer
2.0 out of 5 stars Too predictable
Reviewed in the United States on March 30, 2019
Verified Purchase
Premise had potential but never shined. Think B movie...dialog and plotting. For a high level soldier in the Guard, Kira's operated too often on bravado rather than what an elite in an intelligence branch would do. No real anticipation of potential trouble. Won't continue the series.
Read more
Helpful
Comment Report abuse
See all reviews

Laurie R
5.0 out of 5 stars People matter and so does excitement
Reviewed in Australia on May 5, 2019
Verified Purchase
I love how DuBoff intertwines exciting action and people relationships. Her writing is captivating. The stories have a number of engaging elements. Great writing. Already have the next book in the series.
Read more
Report abuse

Daleaus
3.0 out of 5 stars I enjoyed this
Reviewed in Australia on January 22, 2019
Verified Purchase
Quick story with everything flowing quickly through the book. An easy light read between my core reading list. I might try the second book.
Read more
Report abuse
See all reviews