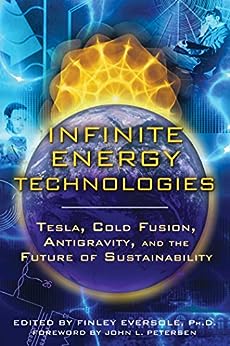 For those interested, the following link will take prospective readers to a non-technical talk on free energy technologies given in April 2014 by Eversole at an international conference. It gives a brief overview of some of the issues addressed in this volume. Simply copy the link to your browser search line.
pixelflow.com/pixelflow/portal/public/VideoReviewPortlet.do?accessTokenId=b7463312-4d78-431c-8603-ba7c11a6b33c
--This text refers to an alternate kindle_edition edition.

“With humanity facing the dismaying prospects of global ecological collapse and geopolitical chaos, there is an urgent need for clear solutions-based guidance that penetrates our dulled consciousness and pulls us back from the precipice. Infinite Energy Technologies delivers such guidance.”
--Joel Garbon, president of New Energy Movement and coauthor of Breakthrough Power

As the global need for clean, renewable energy grows and the shortage of viable large-scale solutions continues, it is time to look to the geniuses of our past and the visionaries of our future for answers. Taking inspiration from Albert Einstein’s statement that “problems cannot be solved by the same level of thinking that created them,” Finley Eversole explains that the key to a pollution- and poverty-free future of infinite energy lies not in pursuing one single method but in investigating all the possibilities--in uniting as a world in creative pursuit of global transformation.

Exploring five nearly unknown geniuses of our past--John Worrell Keely, Nikola Tesla, Viktor Schauberger, Royal Raymond Rife, and T. Townsend Brown--and their revolutionary discoveries about free energy, electricity, water vortex motion, electric ray and super-microscope technology, and antigravity, this book helps to restore their long-suppressed scientific legacies and bring us one step closer to the destiny they foresaw. Eversole has gathered research from leading experts on cold fusion, zero-point energy, power from water, and the free-energy potential of the Searl Effect Generator to reveal technologies that work with Nature’s laws and that, if fully implemented, could establish sustainable energy systems in a single generation.

FINLEY EVERSOLE, Ph.D., has lectured widely on the arts, philosophy, metaphysics, and creativity. He served as executive director of the Society for the Arts, Religion, and Contemporary Culture from 1966 to 1969, collaborating with Joseph Campbell, Alan Watts, W. H. Auden, and Alfred H. Barr Jr., founder of the Museum of Modern Art. The author of Art and Spiritual Transformation, he lives in Birmingham, Alabama. --This text refers to an alternate kindle_edition edition.

T. Townsend Brown was jubilant when he returned from France in 1956. The soft-spoken scientist had a solid clue that could lead to fuel-less space travel. His saucer-shaped discs flew at speeds of up to several hundred miles per hour, with no moving parts. One thing he was certain of--the phenomenon should be investigated by the best scientific institutions. Surely now the science establishment would admit that he really had something. Although the tall, lean physicist--handsome, in a gangly way--was a humble man, even shy, he confidently took his good news to a top-ranking officer he knew in Washington, D.C.

“The experiments in Paris proved that the anomalous motion of my disc airfoils was not all caused by ion wind.” The listener would hear Brown’s every word, because he took his time in getting words out. “They conclusively proved that the apparatus works even in high vacuum. Here’s the documentation . . .”

Anomalous means “unusual”--a discovery that does not fit into the current box of acknowledged science. In this case, the anomaly revealed a connection between electricity and gravity.

That year Interavia magazine reported that Brown’s discs reached speeds of several hundred miles per hour when charged with several hundred thousand volts of electricity. A wire running along the leading edge of each disc charged that side with high positive voltage, and the trailing edge was wired for an opposite charge. The high voltage ionized air around the disc, and a cloud of positive ions formed ahead of the craft and a cloud of negative ions behind.

The apparatus was pulled along by its self-generated gravity field, like a surfer riding a wave. Fate magazine writer Gaston Burridge in 1958 also described Brown’s metal discs, some up to thirty inches in diameter by that time. Because they needed a wire to supply electric charges, the discs were tethered by a wire to a Maypole-like mast. The double-saucer objects circled the pole with a slight humming sound. “In the dark they glow with an eerie lavender light.”

Instead of congratulations on the French test results, at the Pentagon he again ran into closed doors. Even his former classmate from officer candidates school, Admiral Hyman Rickover, discouraged Brown from continuing to explore the dogma-shattering discovery that the force of gravity could be tweaked or even blanked out by the electrical force.

“Townsend, I’m going to do you a favor and tell you, don’t take this work any further. Drop it.”

Was this advice given to Brown by a highly placed friend who knew that the United States military was already exploring electrogravitics? (Sleuthing by American scientist Dr. Paul LaViolette uncovered a paper trail that led from Brown’s early work, toward secret research by the military, and eventually pointed to “black project” aircraft.)

Were the repeated break-ins into Brown’s laboratory meant to discourage him from pursuing his line of research?

Brown didn’t quit, although by that time he and his family had spent nearly $250,000 of their own money on research. He had already put in more than thirty years seeking scientific explanations for the strange phenomena he witnessed in the laboratory. He earlier called it electrogravitics, but later in his life, trying to get acknowledgement from establishment scientists, he stopped using the word electrogravitics and instead used the more accepted scientific terminology “stress in dielectrics.”

No matter what his day job, the obsessed researcher experimented in his home laboratory in his spare time. Above all he wanted to know, Why is this happening? He was convinced that the coupling of the two forces--electricity and gravity--could be put to practical use.

An arrogant academia ignored his findings. Given the cold-shoulder treatment by the science establishment, Brown spent family savings and even personal food money on laboratory supplies. Perhaps he would not have had the heart to continue his lonely research if he had known in 1956 that nearly thirty more years of hard work were ahead of him. He died in 1985 with the frustration of having his findings still unaccepted.

The last half of his career involved new twists. Instead of electrogravitics, at the end of his life he was demonstrating “gravitoelectrics” and “petrovoltaics”--electricity from rocks. Brown’s many patents and findings ranged from an electrostatic motor to unusual high-fidelity speakers and electrostatic cooling, to lighter-than-air materials and advanced dielectrics. His name should be recognized by students of science, but instead it has dropped into obscurity.

Jeane Manning has traveled in twelve countries and interviewed dozens of scientists since 1981, researching revolutionary clean energy systems that could replace oil. With Joel Garbon, she coauthored the award-winning book Breakthrough Power: How Quantum-Leap New Energy Inventions Can Transform Our World. Her earlier books include The Coming Energy Revolution and Energie, and several coauthored books, including Angels Don’t Play This HAARP with Dr. Nick Begich. Her books have been published in seven languages. Manning now lives near Vancouver, Canada. Her websites are www.BreakthroughPower.net and www.ChangingPower.net. --This text refers to an alternate kindle_edition edition.
Read more

4.1 out of 5 stars
4.1 out of 5
23 global ratings
How are ratings calculated?
To calculate the overall star rating and percentage breakdown by star, we don’t use a simple average. Instead, our system considers things like how recent a review is and if the reviewer bought the item on Amazon. It also analyzes reviews to verify trustworthiness.
Top reviews

Larissa
5.0 out of 5 stars Infinite Energies Technologies
Reviewed in the United States on January 29, 2020
Verified Purchase
This publication is dry and very technical, but educates the reader how new progressive technologies got buried without a chance to develop farther to change human lives and ecology of our planet for the better.
Read more
Helpful
Report abuse

Anne in NC
3.0 out of 5 stars Interesting But No Technological Substance
Reviewed in the United States on April 14, 2014
Verified Purchase
Consists of biographical essays on all of the major players in "alternative science" through the years. Good historical overview but its about the people, not the technology as the title implies.
Read more
3 people found this helpful
Helpful
Report abuse

Jerry c.
4.0 out of 5 stars Four Stars
Reviewed in the United States on February 17, 2016
Verified Purchase
Book was a good read. However the information did get a little clouded in credibility in some areas.
Read more
Helpful
Report abuse

Yolanda in San Francisco
3.0 out of 5 stars Just OK
Reviewed in the United States on February 1, 2014
Verified Purchase
The biographical info was somewhat interesting, but the part about the technologies was pretty far-fetched, and most of them didn't seem very plausible or practical to me. At least not in the near future. "Zero-point energy"? Please! When they said that space aliens are living on earth, that didn't help its believability!
Read more
3 people found this helpful
Helpful
Report abuse

Nando
1.0 out of 5 stars A very complete garbage collection
Reviewed in the United States on March 18, 2019
Another pseudo intellectual with a vortex fetish.
This book is a collection of name dropping, intelligent quotes taken out of context and baseless pronouncements. Geniuses are not infallible and unfortunately some have said silly things; the author uses these instances as foundational concepts and weaves a loose and incomplete story. There are no cogent arguments or tangible results. There is a very good reason we don't have anything resembling free energy and that's because the universe doesn't work that way; it's not because of government conspiracies.
You need to digest some real physics before you can start to poke holes in it but that is understandably beyond the lay audience. Maybe some kid will be inspired to wind an electromagnet and discover the joy and real physics.

Bing Xiao
2.0 out of 5 stars Disappointed with contents
Reviewed in the United Kingdom on September 18, 2016
Verified Purchase
Two things l like about this book are cover and title. Very disappointed with the contents, there are many fancy stories, rumours and occasionally touching the science behind the topic slightly. From the current scientific standards, many topics are either pseudoscience or pathological sciences. I wish this book could explain the topics from a real scientific perspective, giving some solid arguments using maths and physics.
Read more
Report abuse
See all reviews