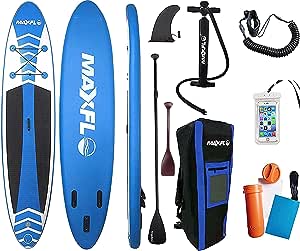 Great for Advanced and Beginners

With this board, beginners can enjoy wonderful surfing experience, making it easy to glide across the surface with ease. Our paddleboard is made for early learning, comfortable and convenient to use

ULTRA DURABLE constructed with additional PVC layer of board rails are highly strengthened the board durability.

4.4 out of 5 stars
4.4 out of 5
191 global ratings
How are ratings calculated?
To calculate the overall star rating and percentage breakdown by star, we don’t use a simple average. Instead, our system considers things like how recent a review is and if the reviewer bought the item on Amazon. It also analyzes reviews to verify trustworthiness.

Momigimarie
5.0 out of 5 stars High quality SUP. Great value
Reviewed in the United States on August 14, 2019
Verified Purchase
Love the backpack, pump, repair kit. Easy to inflate. Lighter to carry than expected. This does not come with a leash which I bought separately to prevent the board from floating away in river currents. Love it. Recommend following weight guidelines. Will not support heavier than capacity.
Read more

5.0 out of 5 stars High quality SUP. Great value
By Momigimarie on August 14, 2019
Love the backpack, pump, repair kit. Easy to inflate. Lighter to carry than expected. This does not come with a leash which I bought separately to prevent the board from floating away in river currents. Love it. Recommend following weight guidelines. Will not support heavier than capacity.
Images in this review

I. A. Lynn
4.0 out of 5 stars A great cheap alternative to the rigid paddle boards
Reviewed in the United States on March 30, 2020
Verified Purchase
It's lightweight to carry down to the beach. Easy set up, takes about 10 minutes to unroll, inflate, put the fin on. It's super easy. Of course it is inflatable, so it's important to be mindful of that. I wouldn't try to catch shore break with it or drag it on a rocky beach. But it's fun to ride. I surf on it with myself (I'm 5'10 175) and my two kids. The one huge pro with the ISUP compared to the rigid SUP is that it's very easy to carry down to the beach and into the water. My 6 year old can carry the board when it's inflated. I would highly recommend this.
Read more
8 people found this helpful
Helpful
Report abuse

Daniel Garcia
5.0 out of 5 stars Great starter kit
Reviewed in the United States on July 28, 2020
Verified Purchase
Our dive into paddleboarding, great deal. Pros: all inclusive, easy to use, versatile, low cost, and wide board is very stable.

Cons: paddle too long for sitting(useable though), wide board is slower, hard to inflate*, hard to deflate*.
*the hand pump is low pressure/high volume, max psi is 20psi(board is 16). It will take 15min of constant pumping unless others help, you need to stop, and thats 30+ minutes.
Hint, get and electric pump for about $30, pump time is well under 5 minutes. It will also deflate throughly in the same time.
Very pleased with purchase.

Nicole Harrington
4.0 out of 5 stars needs a better pump
Reviewed in the United States on April 15, 2020
Verified Purchase
The connection to the board does not seal well. it is not possible to lock the connector in so you can pump it up. One person has to hold it tight while another is pumping. CHEAP PUMP
The gage on the pressure should also be marked correctly where it should be and not way over the recommended pressure.
The board itself seems good. stable and sturdy. No leaks so far used it only twice. Easy to pack up and take with you.
Read more
5 people found this helpful
Helpful
Report abuse

T. L. Fulton
4.0 out of 5 stars Love this purchase!
Reviewed in the United States on October 30, 2020
Verified Purchase
Get this out of the way: it's tough to inflate, takes a lot of pumps and a good bit of time. But, I can bungee this to the back of my bike and ride to the lake. I haven't had it a full season, just got it beginning of September, but I've had it out everyday it's been in the mid 70's, even in the fall. I have a big bay I like to take it to on a reservoir lake with a horsepower limit, and that bay is probably a dozen acres of 4' deep water, so no wake boats are ever back there, and when the wind dies in the evening it turns to glass. I've never fallen off this thing on that bay, even my first time out, when my knees wobbled for about the first hour. Ever since then I've been confident enough to go out even when the weather has been pretty chilly at night and the water is probably too cold, I've been able to stay out of it no problem. I love it, great core workout! I they didn't lower the reservoir in mid November, I'd buy a wetsuit and take it out in the winter! I think it'll be mostly mud though. I had bought an inflatable kayak a few months prior to this, and it's a nice kayak and all, but I may never use it again. My second day out I had a buddy talk me into taking it on a ski lake, I made it across the lake but fell like four times in wakes. My buddy thought it was funny until I sat down and started just gliding across the waves while he was worrying about getting swamped in his kayak. This is more versatile in that regard than a kayak, you can sit, stand, or kneel, and you can remove the rudder and go in shallower water. There's a couple acres of that bay I go to that's only about a foot deep, and it's full of catfish holes, I actually kicked one up and was chasing it, but I hadn't thought to remove my rudder and got stuck in the mud. I think it'd be fun to spear fish off it, but I'd also be afraid of poking a hole in it with a hook. In that regard, it seems incredibly sturdy, I was amazed that an inflatable board could be so rigid! I love the bungee straps on the front, I can put a cooler there with a six pack, I have a small anchor I can stow there, and my dry box with my phone and whatever else. This is my favorite purchase of 2020, and what better way to isolate during a pandemic than in a middle of a hidden bay that doesn't even get a cell signal! :)
Read more
2 people found this helpful
Helpful
Report abuse

Amazon Customer
5.0 out of 5 stars Buy this paddleboard - Awesome purchase!
Reviewed in the United States on December 27, 2019
Verified Purchase
This paddleboard is awesome - I Love It!!! The overall quality is excellent; especially for the cost. This is my favorite and most used item ever. The paddleboard is easy to get ready, easy to use, and easy clean up. The backpack makes it very simple to clean up and keep everything together. I really cannot say enough about this paddleboard, and highly recommend it!
Read more

5.0 out of 5 stars Buy this paddleboard - Awesome purchase!
By Amazon Customer on December 27, 2019
This paddleboard is awesome - I Love It!!! The overall quality is excellent; especially for the cost. This is my favorite and most used item ever. The paddleboard is easy to get ready, easy to use, and easy clean up. The backpack makes it very simple to clean up and keep everything together. I really cannot say enough about this paddleboard, and highly recommend it!
Images in this review

Meghan J.
5.0 out of 5 stars Worth it, but not.. maybe for a child
Reviewed in the United States on December 15, 2019
Verified Purchase
This isn’t a carbon fiber board. For the price, the ease of storing, and durability, it is a good board. It is a pain in the booty to inflate, a real workout! I inflate at home, and travel with it on the roof rack to the beach.
I use it in salt water. It held me, and my puppy easily, under inflated. Me at 150 and the puppy an additional 30 (pounds). I can tell when it is under inflated, as the way the board handles on the water.
The weight of the board is easy to carry the .25 miles to the beach, but I would love to spend more money and get a real board. The way it glides across the water, the overall handling leaves a lot to be desired.

Papillon
5.0 out of 5 stars This is a nice board!
Reviewed in the United States on July 24, 2020
Verified Purchase
I bought this board so that I could have another board for my friends to use. It's a good board, the removable middle fin is helpful for rivers, handles nicely on choppy water! One thing though, if any of you out there happen to own the Body Glove board from Costco, be aware of the fact that the pump from the Body Glove board does NOT fit the valve on this Maxflo. Super irritating when one pump gets left behind and you cant effectively blow up the other with the manual pump. I dont know if this will happen with other pumps.
Read more
One person found this helpful
Helpful
Report abuse
See all reviews

Page 1 of 1 Start overPage 1 of 1
Previous page
Next page
Pages with related products. See and discover other items: Explore paddle boats for lakes, Explore paddle board racks for cars, Explore sup pumps for paddle board, Explore Stand-Up Paddleboards
Back to top
Get to Know Us
Make Money with Us
Amazon Payment Products
Let Us Help You
EnglishChoose a language for shopping. United StatesChoose a country/region for shopping.
© 1996-2021, Amazon.com, Inc. or its affiliates