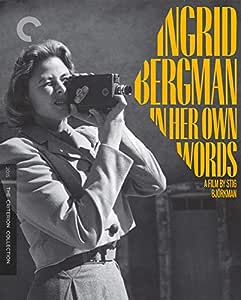 Ingrid Bergman: In Her Own Words (The Criterion Collection) [Blu-ray]

Whether headlining films in Sweden, Italy, or Hollywood, Ingrid Bergman always pierced the screen with a singular soulfulness. With this new documentary, made on the occasion of the one hundredth anniversary of Bergman s birth, director Stig Björkman allows us unprecedented access to her world, culling from the most personal of archival materials letters, diary entries, photographs, and Super 8 and 16 mm footage Bergman herself shot and following her from youth to tumultuous married life and motherhood. Intimate and artful, this lovingly assembled portrait, narrated by actor Alicia Vikander, provides luminous insight into the life and career of an undiminished legend.

4.3 out of 5 stars
4.3 out of 5
54 global ratings
How are ratings calculated?
To calculate the overall star rating and percentage breakdown by star, we don’t use a simple average. Instead, our system considers things like how recent a review is and if the reviewer bought the item on Amazon. It also analyzes reviews to verify trustworthiness.
Top reviews

Reg
5.0 out of 5 stars Incredible. A Must See
Reviewed in the United States on August 17, 2016
Verified Purchase
What an incredible documentary. Really engaging. I have always been a fan of Ingrid Bergman. The amount of personal material and the idea that she created it and then moved it with her everywhere she lived is difficult to comprehend. This documentary is worthy of Awards. Beautifully presented. The interviews with her children are very poignant. She was an unusual person and a complete "free spirit". She was also very talented. I loved this film and I highly recommend it. I hope you enjoy it too.
Read more
20 people found this helpful
Helpful
Comment Report abuse

Farid Bozorgmehr
5.0 out of 5 stars Good to be famous to matter
Reviewed in the United States on October 15, 2020
Verified Purchase
I liked the way she wanted to film everything as much as she could . Maybe she knew one day it would benefit her children financially. The difference is that most of us do the same thing especially with all these digital phones and camera we have and take it for granted. But most of our children or grandchildren would throw them away after we die unless we become someone famous too that they can benefit from our fame
Read more
Helpful
Comment Report abuse

P., Orinda, CA
5.0 out of 5 stars Outstanding!
Reviewed in the United States on January 19, 2017
Verified Purchase
Like us, you'll be spellbound watching this beautifully made, well-narrated biopic featuring Ingrid Bergman's own home movies, her family's interviews, etc. Her lifelong luminescence really comes through, and her children -- often left behind due to her work, her affairs, divorces, moves around the world -- show such acceptance and understanding, despite having missed her for various long periods in their lives. What came through above all was the affection for, and among, everyone throughout the film. Her love of life, family, and truth permeated everything.
Read more
4 people found this helpful
Helpful
Comment Report abuse

Mr. Jones
5.0 out of 5 stars Making A Star Real
Reviewed in the United States on October 6, 2016
Verified Purchase
A wonderful documentary getting into the head of one of the great icons of the Golden Age of Hollywood. Much more flesh and blood than film goddess, Bergman was a modern woman who's choices anticipated 20th century feminism in both career and her personal life.
Read more
One person found this helpful
Helpful
Comment Report abuse

Cheri Sykes
5.0 out of 5 stars What a remarkable person and actress!
Reviewed in the United States on April 27, 2019
Verified Purchase
I've fallen in love with Ingrid Bergman. Courageous, dedicated to her craft, totally a beautiful person. This is a fascinating summary and tribute of her life.
Read more
Helpful
Comment Report abuse

Peace
4.0 out of 5 stars Ingrid Bergman: In Her Own Words
Reviewed in the United States on June 25, 2017
Verified Purchase
I was happy to get this but I was surprised it didn't come in English. Luckily there were subtitles.
Read more
3 people found this helpful
Helpful
Comment Report abuse

jojo
5.0 out of 5 stars Beautiful Ingrid!!
Reviewed in the United States on February 11, 2020
Verified Purchase
Great look at Ingrid's life and career put together by her own children. Good way to get to know the greatest international movie star of the 20th century.
Read more
Helpful
Comment Report abuse

Ophelia87
5.0 out of 5 stars She was beautiful and talented
Reviewed in the United States on January 26, 2017
Verified Purchase
She was beautiful and talented. Acting was her passion. She focused on acting and excelled. Lived in many countries, got married, got divorced, had children. She adored her children and suffered much when custody decisions did not favored her.
Still, she continued acting. Refused to be a victim. Dealt bravely with the cancer that cut her life short. An extraordinary life and an inspiration!

Geraldine
5.0 out of 5 stars Ingrid Bergman - In Her Own Words (DVD)
Reviewed in the United Kingdom on November 6, 2016
Verified Purchase
I watched this in Swedish language narration from Alicia as I launched the play before I set it up but then we restarted it after watching it all so we had the full documentary with English subtitles & Swedish narration & then just viewed all over again with English narration & enjoyed it all over again - its a film made with love for Ingrid Bergman & she shines all the time through the home cine videos & just like she does in her films Ingrid Bergman just glows & it's wonderful to see her with her children & hear them as grown ups speak & share their memories with us all - she was such a wonderful actor & we are very lucky to have all these moving images reveal her character - fabulous, touching & very emotional a really fulfilling documentary & not just for Ingrid Bergman fans although we are ... we just wish that the distributor(owner) of her film The Yellow Rolls Royce would go back to the original film stock & give it a bluray release after all it's got a lot of great "stars" within this film & it's diabolical on dvd so far! here's to hoping that the corporation who owns the rights get it together as this is just one of Ingrid Bergman films which isn't given a decent quality release. This documentary shines a big spotlight on her wonderful behind the scenes life & proves there's a huge audience out there which needs to be treated to her popular films as well as her art house releases. Wonderful documentary so come on the 'distributors' get a grip & release her films on blu - ray now!
Read more
4 people found this helpful
Report abuse

R. Chapman
5.0 out of 5 stars "Throughout it all, she took the blows, and did it her way"
Reviewed in the United Kingdom on March 10, 2018
Verified Purchase
A superb, unflinching and in-depth documentary on the life of Ingrid Bergman, compiled from interview with her children and friends, extracts from her diaries, film clips, newsreel footage and, by far best of all, extraordinary, luminous 16mm colour home movies from the forties and fifties.
The film is made with honesty, intelligence and loving care but, if I have a personal criticism, the readings by Alicia Vickander, although with an authentic Swedish accent, are too mournful, without any injection of the humour and high spirits she was renowned for. It has a Michael Nyman soundtrack which, if you enjoy his distinctive trade-mark sound, is good news but I find him repetitive and wildly overrated and it jars after a while.
A screen legend, remembered by most for the much loved but overrated film she made with Bogart. She craved world fame but became bored and disenchanted with Hollywood her two masterpieces: were made with Hitckcock (‘Notorious’), and ‘Journey to Italy’, with her second husband, Roberto Rossellini, Some might also include Renoir’s ‘Elina et les hommes’ and Ingmar Bergman’s ‘Autumn Sonata’.
I remember a, possibly apocryphal, story about the two old ladies who went to see Ingmar’s harrowing and explicit ‘Cries and Whispers’, thinking it was an Ingrid Bergman film.
It is entirely possible, as my strait-laced Father once walked into a multiplex showing ‘Blue Velvet’ by mistake and I’m not sure that he ever recovered.
She played St Joan twice on film (and on stage) and got away with it despite being far too old.
A former colleague’s claim to fame was that she once saw Ingrid quite by chance in a London bank and I think that was the only time I’ve ever envied someone seeing a celebrity.
In these days when celebrity has been devalued, all women claim to be ‘strong’,and quite ordinary actors are called stars, Ingrid Bergman was genuinely extraordinary: independent, obsessed, ambitious, a rare star who could act and not just “behave”, possessed of a quite natural and luminous beauty, who, “ took the blows and did it her way.”
This is probably the definitive film about her her life and, as all too often often is the case with biography, the home movies are a magical revelation and steal the show. Essential viewing for all her many fans.

julie bunn
5.0 out of 5 stars Great for fans
Reviewed in the United Kingdom on October 11, 2017
Verified Purchase
Great video if like me you are interested in the best actors in hollywoids heyday. Very well produced and interesting film with excerpts from Ingrids many diaries, home film foitage and interviews with her adult children and folk who knew her. She was a great actress, true to herself in a mad world which was quick to judge. Great item.
Read more
Report abuse

Baskerville
4.0 out of 5 stars A great video!
Reviewed in the United Kingdom on June 20, 2019
Verified Purchase
As a fan of Ingrid Bergman, I appreciated the interviews with her four children best of all !
Read more
Report abuse
See all reviews
Pages with related products. See and discover other items: criterion movie