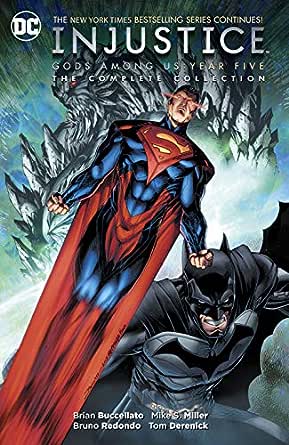 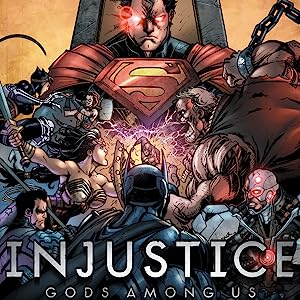 Injustice: Gods Among Us (2013-2016) series subscription
Subscriptions are for new books in the series
Subscribe now with 1-Click®

When will I be charged for each book?
Pre-orders will be placed within 24 hours, but you will not be charged until books are released and ready for download. We will automatically charge your default payment or other payment method on file.
You've subscribed to Injustice: Gods Among Us (2013-2016)! We will preorder your items within 24 hours of when they become available. When new books are released, we'll charge your default payment method for the lowest price available during the pre-order period.
Update your device or payment method, cancel individual pre-orders or your subscription at
Your Memberships & Subscriptions
There was an error. We were unable to process your subscription due to an error. Please refresh and try again. 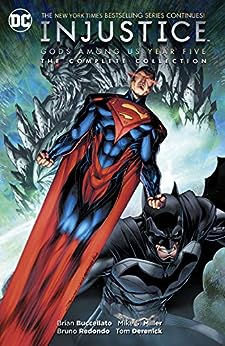 Brian Buccellato is a writer and and illustrator, best known for his work as scribe on his best selling run on The Flash with co-writer and artist Francis Manapul. He has also written Detective Comics, Injustice and Forever Evil: Rogues Rebellion for DC Comics. --This text refers to the paperback edition.

CB ReviewTop Contributor: Batman
4.0 out of 5 stars Decent End to an Incredible Series
Reviewed in the United States on June 12, 2020
Verified Purchase
Injustice is a series that was way better than it should have been, and the first three years are among my favorite non-canon DC stories. This last volume serves as a bridge between the series and the video game (I can't tell if reviews complaining about the cliffhanger are trolls or are just unaware, but yes, this cuts off because this ties into the game by the same name).

Like Year 4, this last year is a little bit of a wasted opportunity. While there are cool moments (I didn't expect myself to be rooting for Hawkman of all people), there isn't really a complete arc to this year, other than rushing to set up the circumstances in the game. The Superman/Batman clashes feel repetitive of their previous arguments. The deaths feel less earned and seem to be there more for shock value. And what should have been the key to the whole year (the device that brings the uncorrupted Justice League heroes from another reality) was just thrown in at the last second, rather than really fleshed out. In the end, the year is not really about the "Villains" as it was billed to be, nor is it truly about the start of the game, or about the next evolution of the Regime. It's just a hodge podge of mini stories.

But even for a hodge podge, it is WAY better than a lot of DC stories, and I don't regret going through the series for a second. It started with some really brilliant work from Tom Taylor, built out a universe that really started to have its own identity, and yes hobbled a bit at the end, but crossed the finish line.

All in all, even for a weaker volume, this was a solid end to a stellar story about a Superman gone wrong, and I strongly recommend to DC comics fans.

Amazon Customer
5.0 out of 5 stars A fun comic
Reviewed in the United States on January 24, 2020
Verified Purchase
Sucks it took awhile to come out in an omnibus form. Aside from that it's a real good read. I am currently halfway through and am rather enjoying it. I recommend this of have read the other injustice 1 comics.
Read more
4 people found this helpful
Helpful
Comment Report abuse

Fabian Aguilar
5.0 out of 5 stars Remember it’s a prequel.
Reviewed in the United States on August 8, 2020
Verified Purchase
Man I live this series. The DC world has never been so captivating or more infuriating. The way they’ve captured Harleys personalities too is hilarious and I was never a big fan of hers.
Also, please note: something I forgot or never paid attention to is that this is actually a prequel to the video game. Which means the end of volume 5 (which is the last book in the series) is not the end of the story. So if you’re not playing the game it might feel unsatisfactory. But you can YouTube the storyline portions of the game to pick up where the comics leave off if you need.
Read more
One person found this helpful
Helpful
Comment Report abuse

Landon
1.0 out of 5 stars My book seems incomplete
Reviewed in the United States on February 8, 2020
Verified Purchase
My year five book ended with joker being teleported from another reality... Where the ACTUAL ending??? If this is the final book in the "complete" series then why isn't there an ending???
Read more
3 people found this helpful
Helpful
Comment Report abuse

Jasmine Williams
5.0 out of 5 stars LOVE IT SO MUCH
Reviewed in the United States on March 8, 2020
Verified Purchase
This Comic series is my favorite or all time. Not just elseworlds, not just from DC, but ALL TIME. It is so well written and compelling and sad. Like the art style and love the setting. Everything about it is just so good! It ties in w the video games perfectly and I couldn't ask for anything more out of this series. An absolute must-read, not just for comic readers, but anyone who enjoys a great story.
Read more
One person found this helpful
Helpful
Comment Report abuse

JustAnotherDude
5.0 out of 5 stars This is why god won't let me be superman
Reviewed in the United States on May 20, 2020
Verified Purchase
Enjoyed this story didn't expect to. But what happens in the first book to LL was crazy. Then superman broke bad. I think I would have been this kind of superman from the start. Bow down humans worship me!!!
Read more
Helpful
Comment Report abuse

Anthony Young Jr
1.0 out of 5 stars You ended a story like that?
Reviewed in the United States on July 20, 2020
Verified Purchase
This whole series has been so great. I couldn’t stop reading these books. And than you end a great story like that? I’m disappointed and made me regret wasting my time reading the 5 books.
Read more
Helpful
Comment Report abuse

curtis brock
4.0 out of 5 stars Great, but Bogged down by the Game.
Reviewed in the United States on June 30, 2020
Verified Purchase
I really enjoyed this read, and the whole series in general. My main complaint is that the ending of the book is just a lead into the game, so its very anti climactic.
Read more
Helpful
Comment Report abuse
See all reviews