You've subscribed to The Karen Vail Novels! We will preorder your items within 24 hours of when they become available. When new books are released, we'll charge your default payment method for the lowest price available during the pre-order period.
Update your device or payment method, cancel individual pre-orders or your subscription at
Your Memberships & Subscriptions
There was an error. We were unable to process your subscription due to an error. Please refresh and try again. 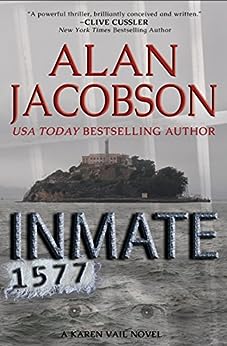 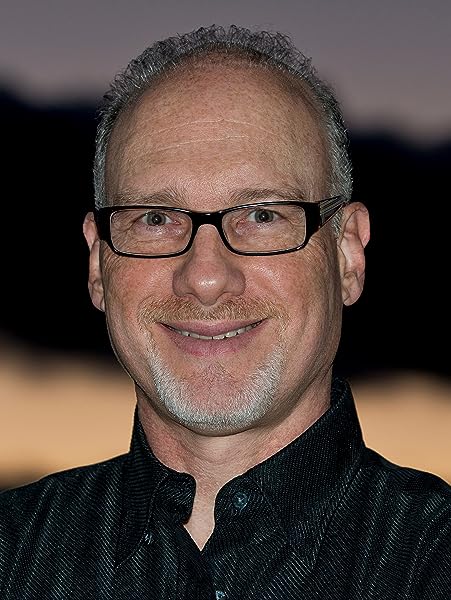 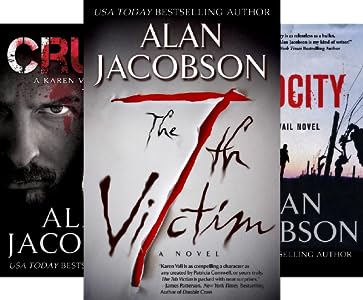 When an elderly woman is found raped and brutally murdered in San Francisco, Vail heads west to team up with SFPD Inspector Lance Burden and her former task force colleague, Detective Roxxann Dixon.

As Vail, Burden, and Dixon follow the killer’s trail in and around San Francisco, the offender continues his rampage, leaving behind clues that ultimately lead them to the most unlikely of places: a mysterious island ripped from city lore whose long-buried, decades-old secrets hold the key to their case. Alcatraz. The Rock.
--This text refers to an alternate kindle_edition edition.

"Inmate 1577 is a mystery masterpiece...the inspiration for thriller writers in the years ahead."
- New York Journal of Books

"Jacobson's previous books were gripping thrill rides, but with Inmate 1577 Jacobson has taken it to another level."
- The Strand Magazine

"Continues his streak of terrific mind-bending thrillers. Jacobson should be mandatory reading for the James Patterson crowd; an essential addition to any fiction collection."
- Library Journal

"Alan Jacobson has captured the desolate solitude that distinguished Alcatraz as the toughest US Penitentiary which housed the worst of the worst. This is not only a riveting read...but it possesses an authenticity that brought back memories from my many years on The Rock."
- George DeVincenzi, Alcatraz Correctional Officer (1950-1957)

"In my 27 years of working at USP Leavenworth as a Correctional Officer and Institution Historian, no other book has painted the story of what it's like to survive behind those 40 foot walls better than Inmate 1577. Hats off to Alan Jacobson!"
- Kenneth LaMaster, Leavenworth Correctional Officer (ret), Institution Historian, and author --This text refers to the preloaded_digital_audio_player edition.

I enjoyed researching and writing Inmate 1577 immensely--and the feedback from readers and reviewers has been astounding. I hope you enjoy reading Inmate 1577 as much as I enjoyed writing it. Drop me an email through my website, AlanJacobson.com, and let me know what you think! --This text refers to the preloaded_digital_audio_player edition.

Alan Jacobson is the national bestselling author of the critically acclaimed thriller, The 7th Victim, which was named to Library Journal's "Best Books of the Year" list for 2008. Alan's years of research with law enforcement, particularly the FBI, influenced him both personally and professionally, and have helped shape the stories he tells and the diverse characters that populate his novels. Both The 7th Victim and one of Alan's forthcoming thrillers, Hard Target, are currently under development as major feature films with an A-list Hollywood producer. --This text refers to the preloaded_digital_audio_player edition.
Read more

4.4 out of 5 stars
4.4 out of 5
330 global ratings
How are ratings calculated?
To calculate the overall star rating and percentage breakdown by star, we don’t use a simple average. Instead, our system considers things like how recent a review is and if the reviewer bought the item on Amazon. It also analyzes reviews to verify trustworthiness.
Top reviews

CaliforniaGirl
1.0 out of 5 stars Way too graphic
Reviewed in the United States on September 15, 2017
Verified Purchase
I skimmed parts, but unfortunately not enough. Yuck. I'm sure there are sickos out there, but I don't need to read about them. The main character isn't even likable. No more Karen Vail books for me.
Read more
29 people found this helpful
Helpful
Report abuse

A Customer
TOP 500 REVIEWERVINE VOICE
3.0 out of 5 stars Numerous Detailed Descriptions of Brutal Murders
Reviewed in the United States on August 30, 2017
Verified Purchase
This is the first I've read in this series, and perhaps thereby missing the protagonist's better side but in this book, Karen Vail is prickly, rude, overbearing, plus many etceteras. The supporting cast aren't as well-drawn but the police detectives are likeable, which saved the book for me. Did I mention the many brutal and gory murders?
Read more
20 people found this helpful
Helpful
Report abuse

Crime and Mystery Lover
5.0 out of 5 stars Strong and intense
Reviewed in the United States on April 23, 2019
Verified Purchase
This was my first read by Jacobson, a murder procedural involving a series of bizarre murders in the San Francisco area. The plot is strongly developed, made more intense by two story lines running parallel. The chief setting is Alcatraz Island and it's famous prison, which the author researched well and makes it come to life as we view it both in the past and the present. The characters are great and range from humorous and witty to nasty and obnoxious. Although the story is somewhat drawn out, the book clearly deserves a rank of 5.
Read more
3 people found this helpful
Helpful
Report abuse

JOHN CHAVEZ
4.0 out of 5 stars Inmate 1577 (The Karen Vail Series, Book 4)
Reviewed in the United States on February 12, 2019
Verified Purchase
FBI profiler Karen Vail is sent to San Francisco to help solve a serial killer crime spree. This is not for the faint of heart though, the crime scenes are pretty gruesome. There are two stories running side by side, Karen is often rude, but the supporting characters are great. There are some great twists and turns and a surprising ending in store for you.
Read more
5 people found this helpful
Helpful
Report abuse

Lyon Lady
4.0 out of 5 stars Parallel stories that keep you guessing
Reviewed in the United States on February 15, 2020
Verified Purchase
A great plot delivered in small bites hooking the reader from the start. The author presents parallel stories making one guess how they are related and how they will come together. This increases the suspense as different pieces are revealed. This is the third book in Jacobson’s Karen Vail Series that I have read, and it is, by far, the best. The reader, Christina Traister, does an excellent job keeping the listener involved and intrigued throughout.
Read more
One person found this helpful
Helpful
Report abuse

Amazon Customer
5.0 out of 5 stars Ingenuous, quirkey and absorbing!
Reviewed in the United States on February 24, 2019
Verified Purchase
Best novel I've read in ages! The stories weaved together with suspense, sadness, and interest and the characters were most interesting! Did not want to put the book down and when I was forced to, it was on my mind and could not wait to get back to it. Definitely recommend this book!!
Read more
One person found this helpful
Helpful
Report abuse

Sandra Link
5.0 out of 5 stars KEPT ME UP ALL NIGHT.
Reviewed in the United States on September 5, 2017
Verified Purchase
Surprises and tense moments at every turn of the page in this thriller! I highly recommend this book for the reader who likes a thrill ride to the very end. Great subject, and the parallel of two stories being told at the same time is a great treat. Just when I thought I had it, I was surprised once again. This will keep you up all night, reading and biting your nails!
Read more
5 people found this helpful
Helpful
Report abuse

M.. Conde
5.0 out of 5 stars An Intense and Absorbing Story
Reviewed in the United States on October 28, 2019
Verified Purchase
This book really kept my attention and the characters were well drawn and interesting. There was a lot going on and I will leave a synopsis to others who will do a better job than I. I just want to recommend this book as one that kept my attention, had a mystery going on until the end and had characters I could relate with and feel for. The ending was a surprise.
Read more
One person found this helpful
Helpful
Report abuse
See all reviews

Radar157
5.0 out of 5 stars Excellent story
Reviewed in Canada on February 16, 2019
Verified Purchase
This is by far on of the best books I have read in a very long time. I enjoyed that each chapter went from past to the present and then back to the past. It keep me up longer than I wanted to at night till I was finished the book. I live SF and Alcatraz having been there many times for both the day and night tours.
I highly recommend this book and look forward to many more from this author. A+++.

Jenifer Mohammed, Author of Resurrecting Cybele
5.0 out of 5 stars Excellent thriller and mystery!
Reviewed in Canada on December 30, 2013
Verified Purchase
This book was excellent. The story was enthralling, and the character development fully fleshed out. There were surprises but the clues were all laid out in advance. The story was told according to 2 chronologies - one that played out in the past that was juxtaposed with the future (current time). It was clever and the bringing of the past to the present was done masterfully.
Read more
3 people found this helpful
Report abuse

Amazon Customer
4.0 out of 5 stars Good Book
Reviewed in Canada on March 17, 2019
Verified Purchase
Good Book, decided to go to Book 1 after I read it. it kept my interest, and Book 1 is keeping my interest. I like the series
Read more
One person found this helpful
Report abuse

Gerry
3.0 out of 5 stars Who is the killer
Reviewed in Canada on October 13, 2019
Verified Purchase
I enjoyed the descriptions of various places and the way the past history was fuzed into the present. It was predictable that the inmate was not the killer which reduced the suspense as there were only two possibilities.
Read more
Report abuse
See all reviews