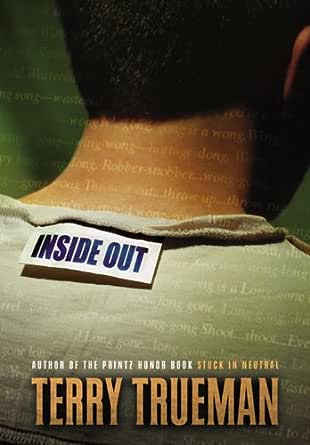 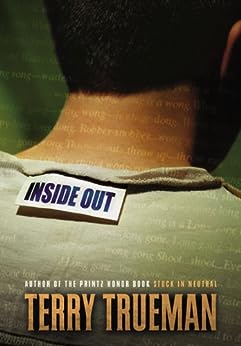 Inside Out Kindle Edition

Grade 9 Up-When two teenage brothers attempt to hold up a Spokane coffee shop where Zach, 16, is waiting for his mother to bring his antipsychotic meds, he is among those held hostage. Thus begins this slender, but harrowing novel that depicts the standoff between the desperate pair and the police outside-all narrated by Zach, who is driven by impulsive outbursts, hateful voices in his head, and difficulty with processing reality. Chapters open with a brief passage that illuminates the history of his illness and suicide attempt, and interventions by his mother and psychiatrist. A phone call from the police to the robbers results in freedom for the others, but Zach, now overdue for his medicine, agrees to remain hostage. An odd bonding ensues among the troubled teens, all of whom are portrayed sympathetically. With no ammunition in their guns, the brothers are basically decent boys, scared and worried about their single mother's unemployment and cancer. Tension builds when one of them is wounded by a stray police bullet. They surrender, and Zach is reunited with his mother, his meds, and the simple comfort of a maple bar he had craved. A stark news article three months later imparts word that the unexpected hero of the crisis has committed suicide, the victim of his tragic illness. Trueman uses Zach's narration to challenge readers to feel the confusion and dark struggle of schizophrenia. The effect is disturbing, if somewhat didactic. Both the grim topic and strong language in this edgy novel suggest a mature audience.
Susan W. Hunter, Riverside Middle School, Springfield, VT
Copyright 2003 Reed Business Information, Inc. --This text refers to an alternate kindle_edition edition.

Terry Trueman was born in Birmingham, Alabama. He attended the University of Washington, where he received his B.A. in creative writing. He also has an M.S. in applied psychology and an M.F.A. in creative writing, both from Eastern Washington University. The father of two sons, Henry Sheehan and Jess, Terry Trueman makes his home in Spokane, Washington, with his wife, Patti. His previous books are No Right Turn, Cruise Control, Inside Out, and Stuck in Neutral, a Michael L. Printz Honor Book.

Gr. 7-10. Sixteen-year-old Zach isn't frightened when two armed teenagers hold up the coffee shop where he's waiting for his mother. "The thing is," Zach says, "I'm used to seeing and hearing really weird stuff." In his second novel, the author of Stuck in Neutral (2000) takes readers inside the mind of a schizophrenic teenager. Excerpts from Zach's psychiatric records interweave with his first-person account of the dramatic robbery, offering readers the medical facts as well as Zach's personal story, especially the terror and confusion he feels when he can't distinguish between the real and the imagined. The narrative blend isn't entirely successful. The facts often feel clumsily inserted, and Zach's unreliable voice doesn't allow his story to develop fully. The shocking ending also feels tacked on. But Trueman sometimes captures moments of heartbreaking truth, and his swift, suspenseful plot will have particular appeal to reluctant readers. Suggest Angela Johnson's Humming Whispers (1995) and Lisa Rowe Fraustino's Ash (1995) for more nuanced stories about a young person living with the illness. Gillian Engberg
Copyright © American Library Association. All rights reserved --This text refers to an alternate kindle_edition edition.
Read more