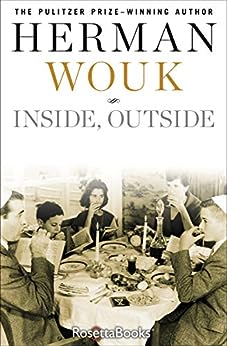 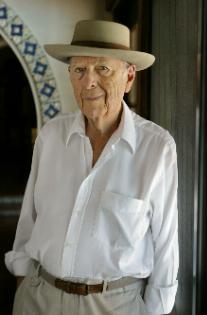 Inside, Outside Kindle Edition

Israel David Goodkind is a minor bureaucrat in the Nixon White House, killing time in the office by writing the story of four generations of his large, sprawling Russian-Jewish immigrant family. As he recounts his brief stint in show business, his torrid affair with a showgirl, and his encounters with a hassled and distracted President Nixon, Goodkind also witnesses historical events firsthand—the Watergate scandal, the Yom Kippur War—and eventually finds his way back to his Jewish faith.

Combining Pulitzer Prize winner Herman Wouk’s wildly comic streak with his deep respect for religious tradition, Inside, Outside is both one man’s story and “a social comedy of Jewish-American life reaching from New York to Jerusalem and spanning much of the 20th century” (Publishers Weekly).

“Wouk reaffirms his position as one of the nation’s eminent storytellers.”—Newsday

Wouk's 1985 saga is a social comedy of Jewish-American life reaching from New York to Jerusalem and spanning much of the 20th century.
Copyright 1995 Reed Business Information, Inc. --This text refers to the paperback edition.

Herman Wouk (born May 27, 1915) is an bestselling American author, with a number of notable novels to his credit, including The Caine Mutiny, The Winds of War, and War and Remembrance. He was born in New York City, into a Jewish family that had immigrated from Russia, and received an A.B. from Columbia University. He was first a radio scriptwriter, and worked with Fred Allen, then in 1941 worked for the US government on radio spots selling war bonds. Wouk then joined the United States Navy and served in the Pacific Theater, an experience he later characterized as educational; "I learned about machinery, I learned how men behaved under pressure, and I learned about Americans." His first ship was the USS Zane, then he was second-in-command on the Southard. He started his writing career onboard, working on a novel during his off-duty hours. He married Betty Sarah Brown in 1945, with whom he had three sons, became a fulltime writer in 1946, and published his debut novel, Aurora Dawn in 1947. In 1952, The Caine Mutiny received the Pulitzer Prize. In 1998, he received the Guardian of Zion Award. --This text refers to the paperback edition.
Read more

Herman Wouk earned his living as a scriptwriter for Fred Allen before serving in World War II. His career as a novelist spans nearly six decades and has brought him resounding international acclaim. He lives in Palm Springs, California.

ilprofessore
4.0 out of 5 stars Looking backwards
Reviewed in the United States 🇺🇸 on December 19, 2016
Verified Purchase
An odd book in many ways, divided against itself. One recurring thread, the best, is an evocative memoir about the travails of a Jewish-American family, much as Wouk’s own, struggling to survive in the Bronx tenements back in the 1920s, prospering in the 1930s, moving to Manhattan. Here we meet the hard-working immigrant father—one foot still in the old world of the Pale, the other in the new world of small business and the neighborhood shul—and that indomitable force of nature and fiction, the ambitious Jewish wife and mother, harridan-saint, whose adoration and protection of her brilliant if unsophisticated son, the author, knows no bounds.

Wouk was born in 1915. The narrative usually follows Wouk’s own life very closely. His father was a pious man stuck in the laundry business, his mother a housewife who worshipped him and her family. Herman, here named “David,” the unsophisticated son, the boychick eventually cracks out of the shell and emerges as a promising young writer. Wouk wrote gags for the Fred Allen radio show for five years before joining the Navy during the Second World War.

Wouk then departs from the autobiographical using an odd plot device: he sends off his young literary protégé, so much like himself, to law school and eventually to Wall Street where he becomes a successful corporate tax lawyer and occasional substitute literary agent. The lawyer character gets invited to the White House during the Watergate epoch, not to fix the president taxes, but to touch up Nixon’s speeches, and ends up on a secret mission or two to Golda Meir in Israel.

In real life Wouk did serve briefly as a speechwriter for George W. Bush, and must have wanted to draw from that unique experience for this book, but here his unlikely fictional device of transforming of gag writer/tax lawyer into powerful speechwriter, diplomatic emissary, and presidential confidante seems totally implausible.

Why such a device? In Across the River and Into the Trees Hemingway, the non-combatant, daydreamed himself as a general; in his last unfinished book Fitzgerald, the burned-out for-hire screenwriter imagined himself the head of a film studio; and perhaps here Wouk chose his protagonist’s profession for a similar reason—plain old-fashioned wish-fulfillment; his being every Jewish momma’s fantasy, “my son the attorney.”

Wouk, writing from experience, returns to his 1930s experience as a fledgling writer in the gag trade with a tortured on-again off-again love affair with a shiksa chorus girl. All this rings true, and is often very touching.

But in the pages Wouk chooses to set in the time the book was written, c. 1985, his secret agent/attorney protagonist, now defender of Nixon, chooses to lecture us about everything from the precarious state of Israel to the sorry state of literature in general. Wouk is unable to disguise his odium for many of the successful Jewish-American writers who followed in his footsteps, but who criticized or even satirized what to Wouk was Paradise Lost. He writes disdainfully about these recalcitrant Jews as if they were his contemporaries, but the authors he choses to slap on the wrist much more resemble Roth, Bellow, and Mel Brooks then they do any of Wouk’s own generation.

All in all, Wouk looking backwards nostalgically at a rich and fulfilling past is a much more convincing old-school teller of tales and celebrant of the best of Jewish-American life than he is as a curmudgeonly finger-pointing moralist and flag-waver.
Read more
15 people found this helpful
Helpful
Report abuse

Bret Scott
4.0 out of 5 stars Good Story About Early 20th Century Orthodox Jewish Immigrants/Assimilation in New York City
Reviewed in the United States 🇺🇸 on May 23, 2019
Verified Purchase
I loved this book. It is kind of about my ancestors and my early childhood life in Brooklyn, New York. Herman Wouk is an outstanding author, one of the best I've ever read. I read several of his books a long time ago, "Winds of War " and its sequel (I think "War and Remembrance"), "Marjorie Morningstar," and "Don't Stop the Carnival."
I would love to read others, and will at some point. Glad I finally read this one.

This book Inside Outside so well spoke of the Orthodox Jewish immigrants of the early 20th Century and the assimilation of the children of that generation into the American culture (hence the Inside -- inside the family, old-world culture -- and outside, assimilation into the community/country where they now reside). That was the days when families emigrated to America for a better life for their families and the opportunity to work hard -- they got no governmental assistance; families and communities helped one another. This book clearly illustrates how the hard the patriarch of this family worked and grew a business to support his family in this beautiful country. Some of today's immigrants would do well to learn how it used to be done. (Not sure when the handouts began … but that is another subject.)

It is not my style to write a review of the story -- you can get that from others -- but suffice to say, I enjoyed Mr. Wouk's writing style, with the narrator going back and forth from his present time to a story of his history in this country and his family life. It's a young man's coming of age and how he became educated -- attended Columbia University -- worked hard, too, and eventually became a lawyer and also landed a job of high importance in the Nixon White House (which was a smaller part of the story).

While I was emeshed in this book, I read that Herman Wouk passed -- at age 103. What a contribution he has made to our culture -- he even earned a Pulitzer for "The Caine Mutiny." I, for one, would welcome legal immigrants like Mr. Wouk. Rest in Peace.
Read more
23 people found this helpful
Helpful
Report abuse
See all reviews

SKH
5.0 out of 5 stars Inside, Outside - Herman Wouk
Reviewed in the United Kingdom 🇬🇧 on April 4, 2021
Verified Purchase
Have not started to read the book yet. But am reading another Herman Wouk book at the moment. He is an excellent writer.
Read more
Report abuse

Cathy
1.0 out of 5 stars Virtually unreadable because of the typography
Reviewed in Canada 🇨🇦 on July 2, 2021
Verified Purchase
I wanted to give this five stars because I know I’d love the book - if only I could read it! The typography is appallingly bad as the font is small and quite dark and leaves very little white space on the page, which tends to make the words seem to all be mushed together and makes it so difficult to read that any enjoyment is gone.
I’m incredibly disappointed as all the Herman Wouk books I’ve read in the past have been marvellous and I expect this one is as well - if, that is, it was readable. I doubt I’ll finish reading the book now and will certainly avoid buying books from this publisher in the future as surely typography should be something to which a publisher pays close attention.
Read more
Report abuse

Rose Murphy
5.0 out of 5 stars Wonderful Author
Reviewed in Canada 🇨🇦 on April 5, 2017
Verified Purchase
So pleased to rediscover this author having read Marjorie Morningstar years ago. This one was like sitting down with your Jewish Uncle (not that I have one but I can imagine it would be just like this) and listening to all the old family stories. And how very colourful they are both the stories and the people involved. A lovely, charming and informative book.
Read more
One person found this helpful
Report abuse