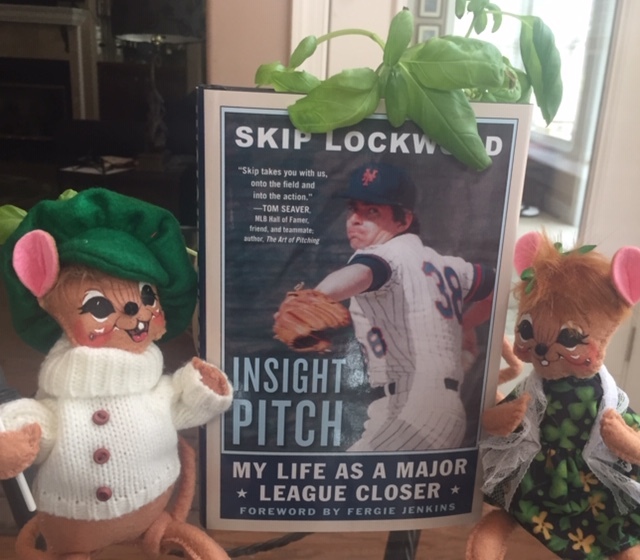 “Joining the Mets in mid-season, Skip quickly became the dependable ‘closer’ we needed. He and I had long conversations about exactly how to prepare for each game and what it meant to leave nothing to chance. As a result, he always pitched with intensity and mental toughness. I told him, ‘Every time you go cross over that foul line, it’s Green Light...it’s Go Time.’ In his new book he takes you with us, onto the field and into the action.”
—Tom Seaver, MLB Hall of Famer, friend, and teammate; author, The Art of Pitching

“The mid and late 1970s are hardly remembered as the best of times for the New York Mets, but that’s not Skip Lockwood’s fault. Lost in the midst of mediocrity was some truly fine work out of the bullpen by a man who was as introspective and observant as any player of his generation. Armed with a keen sense of humor and self-deprecation, Skip’s memoir, Insight Pitch, provides a unique look at life in the major leagues before the players enjoyed the riches and security of today’s big leaguers.”

“The stories Skip shares in Insight Pitch of his major league career are sprinkled with humor and sensitivity. He shares with us his feelings and emotions when facing hitters in tough situations. This is a terrific book.”

“Skip Lockwood writes he might have been the "most ill-equipped person" to ever don a major league uniform, yet few seem better suited to tell the story of a baseball life. Skip’s glasses may have fogged up on the mound, but his perspective on the challenges, rewards, and realities of the game as it was truly played couldn’t be more clear-eyed. Hop in the bullpen cart with Skip Lockwood and settle in for a most Amazin’ ride.”

“Insight Pitch was particularly poignant as I read it during my stint playing soccer in the National Championships. It helped me conceptualize.”
—Johann Clendenin, USMC

“From throwing a ball against the wall at his home as a boy to the major leagues, Skip takes us on a remarkable journey. He really knocks it out of the park. This book is a must read for any boy or girl and coaches, for that matter, interested in sports.”
—Dr. Harvey Dulberg

Skip Lockwood enjoyed a professional baseball career from 1965 to 1980, most of which time he spent pitching for the Milwaukee Brewers (1970-73) and the New York Mets (1975-79). Pursuing his longtime interest in game-day visualization and mental preparations, he proceeded to earn a Masters Degree from Fairfield University and another Masters in Science from MIT as a Sloan Fellow. In the following years, he continued to study and practice in the field of Sport Psychology. Today, he makes frequent appearances and delights audiences with humorous behind-the-scenes baseball stories and inspirational messages of how elite athletes excel despite unyielding pressure.

Fergie Jenkinsis a former Major League Baseball pitcher who had more than 3,000 strikeouts over the course of his career. A three-time All-Star and the 1971 National League Cy Young Award winner, Jenkins was elected into the Baseball Hall of Fame in 1991.

Start reading Insight Pitch: My Life as a Major League Closer on your Kindle in under a minute.

Kiwiwriter
5.0 out of 5 stars An extremely unusual and thoughtful baseball memoir -- great reading
Reviewed in the United States on May 20, 2019
Verified Purchase
Baseball memoirs seem to come in two varieties:
1. The "everything stank" variety, in which the author blames everyone but himself for his misfortunes.
2. The "With the Lord I carried on" variety, in which the author credits God for his good fortunes.

This book is different....Skip Lockwood is a big wheel in the Fellowship of Christian Athletes, but he also became a sports psychologist, got his Master's, and studied both the craft of pitching and the life of the pitcher (and other athletes).

The result is an intriguing book that describes the career of a journeymen pitcher who had some good years as the New York Mets' closer, but focuses on how he did his job, both on the mound as a member of his various teams.

Skip Lockwood has written a fascinating book, and I highly recommend it.

All this is done with an easy to read and pleasant writing style that keeps the reader engaged throughout. What comes across is Skips high intelligence, modesty and self reflection, I think this adds to the joy of reading his book. If you love baseball and are curious to take a ride with a human being like you and me that happened to be gifted with a 100mph fastball, read this book.

Chuck Tewell
5.0 out of 5 stars Insightful story
Reviewed in the United States on July 27, 2018
Verified Purchase
This is a wonderful book for anyone who had dreams of being a big leaguer. It will take you back to your days playing little league, sharing the love of the game with your Dad and remembering your baseball hero's from your youth. It provides insight into the life and the mind of players who played without the security of guaranteed contracts and free agency. Players that played for the love of the game while fulfilling their childhood dreams. Nice job Skip!
Read more
One person found this helpful
Helpful
Comment Report abuse

Bruce Kaufman
3.0 out of 5 stars Average Baseball Book
Reviewed in the United States on December 18, 2019
Verified Purchase
This is not a bad book, But it is a fairly ordinary baseball book. There is little excitement as the author gives us various vignettes of his life in baseball.
Read more
Helpful
Comment Report abuse

Chuck O
5.0 out of 5 stars A Great Surprise
Reviewed in the United States on June 18, 2018
Verified Purchase
Who knew that Skip Lockwood could produce such a thoughtful and intriguing book!

DS
5.0 out of 5 stars An instructing and compelling - and yes, also fun - read
Reviewed in the United States on November 14, 2018
Verified Purchase
A very honest voice, with amazing lessons for the young player and interesting reminisces for those of a certain age. It's not an exaggeration to say I've read hundreds of baseball books -- nor to number this one among the best.
Read more
Helpful
Comment Report abuse

CAB
5.0 out of 5 stars A Great Read
Reviewed in the United States on March 13, 2018
Verified Purchase
This book lives up to it's title, Skip's remarkable journey on how he followed his dream to reality,
A great read !

Page 1 of 1 Start overPage 1 of 1
This shopping feature will continue to load items when the Enter key is pressed. In order to navigate out of this carousel please use your heading shortcut key to navigate to the next or previous heading.
Back
Next
Pages with related products. See and discover other items: western new york history books