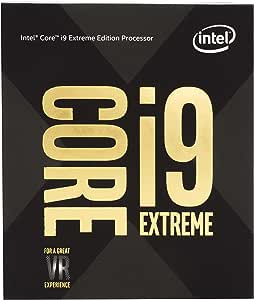 4.3 out of 5 stars
4.3 out of 5
411 global ratings
How are ratings calculated?
To calculate the overall star rating and percentage breakdown by star, we don’t use a simple average. Instead, our system considers things like how recent a review is and if the reviewer bought the item on Amazon. It also analyzes reviews to verify trustworthiness.

craig j stodola
5.0 out of 5 stars Outstanding CPU
Reviewed in the United States on January 25, 2018
Style: i7-7820X ProcessorSize: ProcessorVerified Purchase
I'm coming from a 2009 2.66GHz 4-core Mac Pro. I'm no longer a fan of what Apple offers, especially in terms of price to performance and lack of user upgradable components. So after 20+ years with the Mac, I took a leap of faith and built my own PC.

So far, a few weeks into using this new build, I absolutely LOVE this CPU. I primarily use this machine for photo editing with PhotoMechanic, Adobe Photoshop Cloud 2017, and Capture One Pro 11. This CPU can handle everything I throw at it without breaking a sweat. Even when I've run a 1000 image export in Capture One Pro, a 500 image batch process in Photoshop, I could go back into Capture One Pro, open a new job, render previews, and start RAW adjustments with absolutely no lag. It worked flawlessly. The RAW adjustment sliders are silky smooth, with no lag. Best of all, the CPU temps have remained an average of 55C under load at 4.4GHz overclocked. At 4.6GHz, the temps only averaged 70C - spiked to 76C a couple of times. I'm using the NZXT Kraken x52 CPU cooler. Works for me.

For Photoshop, an application that prefers high clock frequencies vs. more cores, I love that this CPU has the same 4.5GHz Turbo Boost frequency as the Intel 7700K. That's incredibly impressive for an 8-core CPU. The 7700K, used to be the Photoshop king, but I would bet there is little to no real world difference between this 8 core 7820x and the 4-core 7700K when doing lightly threaded Photoshop tasks. The 7820x is so responsive.

IMO, this CPU might be the best bang for the buck in terms of single, dual and multicore threaded applications. When you factor in the 28 PCIe lanes over the 16 PCIe lanes you get with the might i7 8700K, I still have to give the 7820x the nod. If you only need 16 PCIe lanes, then the 8700K will save you about $200 on the CPU, and maybe $50 on the Motherboard.

With the 7820x you'll want a good Motherboard. Should go without saying, but that doesn't mean the most expensive.

After tons of research about VRM issues with the Skylake-X CPUs, I bought the ASRock Extreme4. The two features I wanted most were, dual 8-pin CPU power connects, and the VRM heat pipe. Intel shotgunned this CPU family release, and IMO it caught the MOB manufacturers off guard, and many release their MOBs too quickly. EVGA wouldn't even release their MOBs, as they hadn't been thoroughly tested. These CPUs are power hungry, and if you OC without a good cooler, VRM cooling, and adequate power, they'll overheat and throttle.

New and 2nd Gen x299 boards are already coming out with these dual 8-pin connects and VRM heat pipes (Taichai XE is one example of a Gen 2 x299 MOB). The Extreme4 is a new board released in November, a good few months after the release of Skylake-X. So they had time to get this board right, and it's one of the least expensive boards on the market.

I had a limited budget of $2,000 - and if I could do it all over again, I would definitely buy this build again.

Grumbo
5.0 out of 5 stars The Best bang for your buck processor on the market
Reviewed in the United States on September 27, 2018
Style: i7-7820X ProcessorSize: ProcessorVerified Purchase
It's fast... it's really fast. I wont bore you with technical diagrams and readouts of why this processor is amazing. Instead I will try to portray a real world environment for you. I bought this processor to use in a little home theater / couch gaming build i was making. This computers roles were going to be running a 24/7 Plex Media Server for myself and about 15 other people, while also simultaneously being able to do some light couch surfing/gaming.

My god does this thing perform. Stream 4K halfway around the globe for my buddy in Norway? Check. Let me play a fast paced online FPS from the couch at the same time? Check. Wife Streaming her favorite TV show in the other room? Check. All at the same time. Not even a sign of this little guy having a hiccup.

This is the processor of Gods.
Read more
28 people found this helpful
Helpful
Comment Report abuse

Mark G.
1.0 out of 5 stars THIS ITEM HAS BEEN USED. NO MENTION IN DESCRIPTION.
Reviewed in the United States on January 24, 2019
Style: i9-7920X ProcessorSize: ProcessorVerified Purchase
This item just arrived and is an OPEN BOX and you can clearly see the that thermal paste was wiped off and this CPU was previously installed. Amazon Customer service will let me install and I hope it is fully functional. Great price if item was new but not so much with a used processor. Serial numbers do match with outside box. This is completely unacceptable to not mention that the item is open box... Good Luck!
Read more

DC
1.0 out of 5 stars This CPU is not new. It's a scam
Reviewed in the United States on October 8, 2018
Style: i9-7900X ProcessorSize: ProcessorVerified Purchase
The Intel i9 Core line of CPUs is a good value proposition for your money. It's more expensive than the AMD's Threadripper line of CPUs, but there are good reasons for that as well. The main one for me, is that apart from crazy multi-threading game that is currently being played by CPU makers, the performance of the Intel CPUs in a single-threaded environment hands down beats AMDs. What AMD seems to be touting for us these days is the larger number of cores. Well, most people don't realize that if your CPU has more cores it doesn't mean that everything will perform faster. To take advantage of all those cores you will need a specially compiled software. So what happens is that many computer enthusiasts download the latest and greatest CPU benchmarking tool and run their tests on it. Well, unfortunately that doesn't present a real-life scenario, as most of those tools are geared for multi-cored tests, when in real-life performance your software or a game may not be fine-tuned for extreme multi-threading. So in my book, single-threaded performance is always an important factor in measuring up a CPU performance.

Now having said that, one thing you should definitely NOT do is purchase a used CPU, especially as expensive as Intel i9 Core. And this seller is selling used CPUs which is not indicated in the listing.

Luckily when I received it I had enough patience to fight the urge to open the box. Otherwise the seller wouldn't have accepted it back. (See the image why I wanted to return it.) Eventually I had to pay for shipping and then wait for a week to get my money back.
Read more

Preston Smith
1.0 out of 5 stars Not what expected
Reviewed in the United States on January 30, 2019
Style: i9-7980XE ProcessorSize: ProcessorVerified Purchase
When we received the chip it was in an I9 box and it look official from Intel. But when we tried to put it into the motherboard, we noticed that all the code numbers had been buffed off and it was a complete counterfeit. Pretty bad to fake a $2K chip. Be on the look out here for this.
Read more
10 people found this helpful
Helpful
Comment Report abuse
See all reviews

Goodwww1n
5.0 out of 5 stars no complaints here
Reviewed in the United Kingdom on August 20, 2018
Style: i9-7900X ProcessorSize: ProcessorVerified Purchase
thought i was going to miss my 2 xeon 5650's but with this i've noticed no major loss (apart from heavy CAD type things) but it seeems to like being slightly over-clocked seems more stable at 4Ghz just got to have the cooling for it. It will qite happily boost itself to 5ghz with no issues either
Read more
One person found this helpful
Report abuse

Ashley
5.0 out of 5 stars Awesome chip if you have the cash
Reviewed in the United Kingdom on February 23, 2019
Style: i7-7820X ProcessorSize: ProcessorVerified Purchase
I paired it witha corsair H150i rgb pro cooler and its temps sit around 30 deg on idle and 50 ish under load. I coudlnt quite get mine to 5ghz under overclocking but I'm happy with 4.8 over 8 cores and 16 threads.
I feel that this chip sits right on the balance point of price versus performance for the x299 chips.
Highly recomended.
Read more
One person found this helpful
Report abuse

D
1.0 out of 5 stars Temp 100c
Reviewed in the United Kingdom on June 19, 2018
Style: i9-7920X ProcessorSize: ProcessorVerified Purchase
Very hard to find cooler that will stop from heating this monster cpu! Temp 90-100c in 10-15% cpu in use, crazy hot!
Read more
One person found this helpful
Report abuse

Runley
4.0 out of 5 stars this is a very good processor
Reviewed in the United Kingdom on November 5, 2018
Style: i7-7740X ProcessorSize: ProcessorVerified Purchase
i cant really complain, i got it for a fraction of its price on the sale, really stable, not the best for gaming tbh, if you are searching something for games pick up a K processor instead of an X
Read more
One person found this helpful
Report abuse