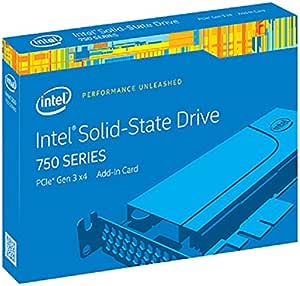 Visit the Intel Store
4.1 out of 5 stars 28 ratings
| 31 answered questions
Currently unavailable.
We don't know when or if this item will be back in stock.

4.1 out of 5 stars
4.1 out of 5
28 global ratings
How are ratings calculated?
To calculate the overall star rating and percentage breakdown by star, we don’t use a simple average. Instead, our system considers things like how recent a review is and if the reviewer bought the item on Amazon. It also analyzes reviews to verify trustworthiness.

D. Fox
5.0 out of 5 stars Very fast drive but slow boot
Reviewed in the United States on March 22, 2017
Verified Purchase
This is a very fast drive even though it boots slower on Windows 7 than the Sata SSD I was using. It was hard to install with Windows 7 and partly because the Intel instructions are wrong. See Photo. Intel instructions said to set Storage Option Boot Rom to UEFI but my Gigabyte X99 board would not allow it to install with it set to UEFI so I changed it to Legacy and it installed right away. Other photos are speed test and it is about 5 times faster than the Sata 3 SSD I was using. Be sure to download the Intel Toolbox software from Intel so you can update firmware and optimize the drive.
Edit Add On: Sometimes a slower boot is good. With a boot time that is too fast, wireless network does not have enough time to connect and any network mapped drives will not connect in time. I let my pc sit a few seconds at the logon screen to give it time to connect to the network.

Steve Riley
2.0 out of 5 stars Fastest drive ever! - but now a problem...
Reviewed in the United States on June 13, 2015
Verified Purchase
I installed this on a new MSI X99 Mpower motherboard, with Windows 7. Note that it is a bit tricky to get the Windows 7 to load onto the drive, but I finally managed it. I think Windows 8 or 10 would load with no issues, as they have the driver built in. You must boot in UEFI mode to get it to work. Also note that only certain motherboards will support booting from this drive.

The steps I had to go thru to get it to finally recognize the drive was:
1. Boot from the DVD in UEFI mode.
2. Install the 750 drivers when asked.
3. remove the driver CD and insert the Windows 7 DVD
4. Click on refresh, the error should go away (where it wasn't recognizing the drive)
5. Create the partitions

I also noticed that if it creates partitions, and you have to try again, it's best to delete all partitions before trying to create the primary partition again. The key in the steps above is to make sure and click on refresh to get the error to go away.

Cons: The difficulty of getting Windows 7 to load as a bootable drive. Cost.

Despite the cons, I rated it 5 stars, this drive is incredibly fast. I can click on the Photoshop icon and it's ready to start using one second later.

I haven't had the drive long, I'll try to update this review as I start using the system more.

UPDATE: 3/26/2018 - I'm having to reduce my star rating severly. While the drive continues to work great, now under Windows 10, there is a major issue, apparently with all NVME drives that you must be aware about. Microsoft is putting out updates which will not install if you have an NVME drive. The major "creator updates", won't install. During the reboot and do more work portion of the update, I get a blue screen error message it can't find my drive and won't boot. I can repower the computer, and it boots right up, but it didn't install the update. So now my OS is way behind in updates, and Microsoft is sending threatening msgs to me, if I don't update (something bad I can't remember now). It looks like there are two options. I can clone my 750SSD onto a normal hard drive, do the update, then clone the updated drive back to the 750 SSD, or I can just reinstall the OS, and start fresh and have to reload all my programs and data! What a huge pain. Microsoft doesn't seem to care about fixing this issue. Until this issue is fixed, I can't recommend people buy this drive. I will update this review when I see this issue has been fixed. Is it a Microsoft problem? A motherboard issue? I contacted MSI about this issue, and they said to do a fresh install of the OS! So every time they have an update, I need to reinstall the OS? That's totally unacceptable.

Roger W. Brown Jr.
5.0 out of 5 stars A very fast booting drive!
Reviewed in the United States on October 6, 2017
Verified Purchase
Purchased as a used drive and subsequent Intel app showed 100 percent available for use.
I had the drive installed and cannot comment on installation procedure.
The drive is very fast and has more storage than I can ever use.
Recommend provided the buyer is willing to endure some unusual Microsoft and computer challenges.
Read more
Helpful
Report abuse

Maverick
5.0 out of 5 stars Warp Drive - Engage
Reviewed in the United States on August 4, 2015
Verified Purchase
Blazing fast and very easy to setup. Intel has all resources to help installation in all aspects. I was very leery and apprehensive prior to installing and setup - but ASUS and Intel very helpful in these matters. All went very smoothly.
Read more
7 people found this helpful
Helpful
Report abuse

NegroISO
5.0 out of 5 stars PCMR would be proud
Reviewed in the United States on February 8, 2017
Verified Purchase
Intel SSD 750 Series PCIe AIC 1.2TB Internal SSD SSDPEDMW012T4R5  was designed to blow your mind, your wallet and your benchmarks. This SSD is so fast I had to run slowdown.exe just to get games to run properly.
Read more
One person found this helpful
Helpful
Report abuse

Adam C. Prince
5.0 out of 5 stars Five Stars-Purchased in 2015
Reviewed in the United States on August 10, 2015
Verified Purchase
Fast, and exciting!
I've had this SSD for over four years now and it still runs as fast as it did the day that I purchased it. I do light workloads, and heavy gaming and the resource meter shows no degradation over the last four and a half years. A+++ product!
Read more
One person found this helpful
Helpful
Report abuse