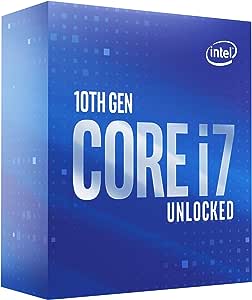 4.8 out of 5 stars
4.8 out of 5
708 global ratings
How are ratings calculated?
To calculate the overall star rating and percentage breakdown by star, we don’t use a simple average. Instead, our system considers things like how recent a review is and if the reviewer bought the item on Amazon. It also analyzes reviews to verify trustworthiness.

Michael
5.0 out of 5 stars The FPS Gaming/Streaming King
Reviewed in the United States on June 5, 2020
Verified Purchase
I waited too long to switch back to the FPS king. This chip is amazing. I missed you Intel.

The PC world is weird. Always chasing $50 savings. Too many games have CPU bottlenecks. I debated hard between just buying a 3700x to replace my 2700x versus the hard MB/CPU upgrade to Intel. But AMD had left me frustrated. My 2700x was never maxed out and I couldn’t tell what was bottleknecking me. The 3700x didn’t promise much higher clock speeds so I wasn’t sure if an upgrade would help. I play Rust on 1440p and my GPU and CPU would sit at 60% utilization or less with frames only around 70fps. First test with the 10700k stock and I’m at 135fps, max graphic settings. My GPU is now pumping out 99% utilization and the game feels amazing.

This chip runs cool on stock. Idk where all the bad thermal predictions came from, but it didn’t happen. Haven’t even OC’d it yet and honestly I may not need to until I upgrade off of my 2080super. But that’s not happening any time soon. I’m hitting 144fps on 1440p max settings now in every FPS game and that was the goal.

Thank you Intel, you nailed this one. The 9th gen had some cost/heat issues and that made me give AMD a try and I’m glad to be back!

For anyone choosing a card. The 10700k is the sweet spot for gaming and streaming. If you only game, I think the 10600k is a cheaper but same performance. I don’t see any need for the 10900k.

Ma1ware
5.0 out of 5 stars Awesome Intel
Reviewed in the United States on May 29, 2020
Verified Purchase
Don’t listen to the people who claim to have this chip and post negative reviews. They are full of sh*t! This chip does not run hot at all, it actually runs cooler than 9th Gen chips but has more performance. My i7 10700k sits at idle 30-32c in an NZXT H1 case. That case has just a 140mm AIO.
Read more
103 people found this helpful
Helpful
Comment Report abuse

BK
5.0 out of 5 stars Gaming Chip. 4790k to this.
Reviewed in the United States on June 6, 2020
Verified Purchase
Yeah I know, Ryzens are cheaper, and out perform the Intel chips in everything... except clocks. As a gamer, I want the highest single core speed possible, 16 threads instead of 32? Whatever, I don't need that many for my uses, lol.

I don't upgrade often, and until now I was still running my trusty 4790k, which still can hold it's own pretty well, but now with the 10700k, the 1080 isn't bottlenecked by my CPU any more, and it's VERY noticeable in certain games I normally saw slight issues.

Should you upgrade 9th gen, or even 8th gen to 10th gen? Honestly, probably not. But if you're say, a few of more generations behind now, it's a worthy upgrade. Yes it's an upgraded 9900k, but that's still really good for ~$400!

So yeah it's just shy of a month using it and it's been a beast. I haven't messed with clocks at all since the built in boosts do the job fine, especially paired with the D15 keeping it nice and cool. Haven't gone above 60c in full load yet.

Thomas
5.0 out of 5 stars Great CPU
Reviewed in the United States on May 29, 2020
Verified Purchase
Upgraded from an i5 6500 to this i7-10700k and wow has it made a difference. No more stutters in games and a huge FPS gain. Lookup benchmarks for more performance stats.

Was originally worried about temps as most reviews said 10th gen Intels are running hot. I have a Noctua NH-U12S cooling this without issues (not overclocked). CPU does heat up immensely in Warzone where a 3-4 hour gaming session has temperatures in the mid 70s c.

Pubg, dota 2, and escape from tarkov this CPU only heats up to high 50's to low 60's which is better than I expected. I personally won't overclock this until I invest in a better air cooler or aio. Will update this review as I complete testing and benchmarks.
Read more
67 people found this helpful
Helpful
Comment Report abuse

Allen
5.0 out of 5 stars Nice CPU for the price
Reviewed in the United States on June 6, 2020
Verified Purchase
If you're able to pick up the CPU for retail price (~$400 USD), this is a great purchase if you do not want to go the AMD route. It's essentially i9 9900k performance for the exact same cost.

There were some concerns regarding the idle and under load temperatures, but I have not seen any temperatures above 65C even during continuous stress testing on stock clock speeds.

If you DO plan to overclock the CPU, it seems like a no-brainer invest in a better cooling solution (probably AIO with 240 mm radiator) and a motherboard with decent VRMs.
Read more
60 people found this helpful
Helpful
Comment Report abuse

CGen_70s
5.0 out of 5 stars Awesome CPU.
Reviewed in the United Kingdom on August 9, 2020
Verified Purchase
Fantastic CPU. Clocks to advertised clocks, unlike AMD.
Overclocks very easy, but I am sticking with Intel boosting to 5.1Ghz, as it's nice and stable, cooler, and clocks down when the power isn't needed. I used a Dark Rock Pro 4, and a Gigabyte Vision G Z490 Motherboard - loved the white design, loved all those USB ports. Nice BIOS.
Bit expensive, especially since this is just a refresh of a refresh, of a refresh - Intel are still stuck on 14nm process.
But you can always count on Intel for gaming and emulation, and this CPU doesn't disappoint.
Read more
11 people found this helpful
Report abuse

Rajat Shrivastava
5.0 out of 5 stars The first person who bought this
Reviewed in India on July 8, 2020
Verified Purchase
Fast, temperatures are good, 35 at ideal and around 60 at load. those people who are saying it's hot actually they don't have this processor. Not much expensive in other countries, it's only expensive in India because of 42% tax. So if you love intel and want the same performance as core i9 9900K then this is for you, because core i9 10900K is out of stock now.
Read more
27 people found this helpful
Report abuse

Phil
5.0 out of 5 stars 5.1-5.2GHz !!!!
Reviewed in the United Kingdom on August 27, 2020
Verified Purchase
this CPU has 3.8GHz base clock my old CPU had a boost clock of 3.8GHz and rarely reached it...
this CPU is perfect haven't had any issue yet other than it does run a little hot but i have a huge CPU cooler so its only reaching high 60's on not hugely intensive games
Read more
2 people found this helpful
Report abuse

Bazza
5.0 out of 5 stars Very good
Reviewed in the United Kingdom on November 18, 2020
Verified Purchase
had this for about 2 weeks and is brilliant managed to get it up to 5.5ghz on a ASUS z490 the only downside to this chip is that its very very hot with a double rad aio at 5.1ghz i hit 90C Max and idle around 35C but upgraded to a full custom loop and now it has all the cooling it needs and it actually out preforms the i9 at 5.4ghz so keep that in mind for you overclockers. all in all brilliant value and performance and the perfect match for my FE 3080. the only problem was delivery it came very dinged up and left in the damp.
Read more
Report abuse
See all reviews