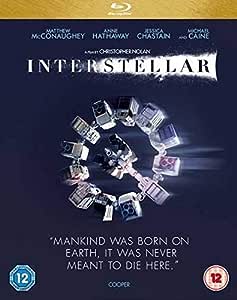 Secure transaction
Your transaction is secure
We work hard to protect your security and privacy. Our payment security system encrypts your information during transmission. We don’t share your credit card details with third-party sellers, and we don’t sell your information to others. Learn more
Details
Ships from
Amazon
Sold by
skyvo-direct-usa
Interstellar [Blu-ray] [2... has been added to your Cart

Sci-fi feature written and directed by Christopher Nolan, director of 'The Dark Knight' trilogy. On a resource-depleted Earth in the near future, the discovery of a wormhole which can transport users through time and space unites scientists and explorers in the most important mission in human history. Among the potential travellers is a widowed engineer (Matthew McConaughey) who must decide whether to remain with his two children or to test the limits of human space travel, to see if there is a future for humanity out among the stars or whether the end of the Earth spells the end for humanity. Academy Award-winner Hans Zimmer returns to partner Nolan and score the film. The cast members include Jessica Chastain, Michael Caine and Anne Hathaway. The film was nominated for five Academy Awards and won for Best Visual Effects.Extra Content The Science of Interstellar Plotting An Interstellar Journey Life On Cooper's Farm The Dust Tars and Case The Cosmic Sounds Of Interstellar The Space Suits The Endurance Shooting In Iceland: Miller's Planet/Mann's Planet The Ranger And The Lander Miniatures In Space The Simulation Of Zero Celestial Landmark Across All Dimensions And Time Final Thoughts Trailer 1 - Lee Trailer 2 - Wonder Trailer 3 - Memories Trailer 4 - Mankind

4.6 out of 5 stars
4.6 out of 5
2,612 global ratings
How are ratings calculated?
To calculate the overall star rating and percentage breakdown by star, we don’t use a simple average. Instead, our system considers things like how recent a review is and if the reviewer bought the item on Amazon. It also analyzes reviews to verify trustworthiness.

C. Mueller
2.0 out of 5 stars There is no digital download
Reviewed in the United States on July 10, 2020
Verified Purchase
Intersteller blu-ray 2 disk set. Photo of product indicates you get a digital download along with the blu-ray disks. I found that not only is the code they give you to download long out of date (30/3/2018) but when you go to the listed URL and enter the code you get a reply "code not valid in your region". The URL has a UK in it so apparently this is a product of the UK. Amazon/seller needs to correct the listing for this product. There is no digital download.
Read more
Helpful
Report abuse

Alex
1.0 out of 5 stars Wrong edition received
Reviewed in the United States on October 10, 2019
Verified Purchase
The copy I received does not have, as seen on the picture, the digital version. Returning. Hoping I get the right copy.
Read more
4 people found this helpful
Helpful
Report abuse

F. Woods
5.0 out of 5 stars I received it, but Amazon says still being shipped.
Reviewed in the United States on January 27, 2020
Verified Purchase
The music is so fantastic, also the plot reminds me of the time margins that Charlton Heston's character found in Planet Of The Apes where earth time went faster than he did out on his space trip. Matthew McConaughey also returned back to his daughter where she was elderly & much older than him, a bit like time distortion for Mr. Heston.
Read more
Helpful
Report abuse

Amazon Customer
1.0 out of 5 stars Not a region 1 release
Reviewed in the United States on October 28, 2020
Verified Purchase
They sent me a region 2 edition. Does not work in US machines.
Read more
Helpful
Report abuse

Kia fisher
1.0 out of 5 stars Not happy with this
Reviewed in the United States on February 3, 2021
Verified Purchase
The DVD I was sent will not play on my Xbox or DVD player. I contacted the seller and he basically said too bad you have to get a device that works for that dvd. Not happy at all. And it took a while to send.
Read more
Helpful
Report abuse

D. Bagwell
5.0 out of 5 stars a MUST SEE
Reviewed in the United States on May 20, 2018
Verified Purchase
A truly EPIC piece of SCI-FI. One of the best space/time movies ever written Powerful, realistic and touching all at the same time.
Read more
One person found this helpful
Helpful
Report abuse

Gordon M. Tenney
1.0 out of 5 stars Expired Digital Code - Get bluray by itself instead.
Reviewed in the United States on May 8, 2019
Verified Purchase
I got this product instead of the bluray by itself because I wanted the digital copy as well. The digital code that came with it is expired by over a year and isn't recognized by MoviesAnywhere.
Read more
One person found this helpful
Helpful
Report abuse

BiGboy[G]
5.0 out of 5 stars Truly Reqion free BluRay
Reviewed in the United States on July 4, 2019
Verified Purchase
Was hesitant to buy if its really region free..Man how glad iam when it played on my samsung bluray player bought here in ph 🇵🇭 happy it add to my collection.
Read more
One person found this helpful
Helpful
Report abuse
See all reviews

S. Butler
5.0 out of 5 stars Masterpiece on 4K UHD
Reviewed in the United Kingdom on December 5, 2019
Verified Purchase
For me this film is a masterpiece. In my opinion Christopher Nolan has the midas touch. His drive to bring such a monumental sci-fi epic to the big screen is truly inspiring as is his desire to be as scientifically correct within the constraints of a money-making endeavour. His approach here, as with so many of his films, is to shy away as much as is possible, from CGI and revert back to models where needed or life size sets where he can.

Casting has been spot on and although a minor gripe, Matthew McConaughey's low, breathy voice can be hard to make out at times. But he's at home here in the role of Cooper. Likewise Anne Hathaway et co. Including the young cast members all excel in their roles. Matt Damon brings an amazing quality to the hopeless and frayed Doctor Mann.

For me Hans Zimmer's score, though, is the real star of the piece. The use of a church organ for some of the scenes was inspired and works so well to capture the immensity of the subject matter.

Nolan's ambiguous Tesseract scene may have many scratching their heads but at the end of the day the director is leaving this for us the viewer to interpret as we see fit.

Some more technically minded watchers will complain about the transition from 65mm(?) film to IMAX and back again but frankly I don't understand and at no point has it detracted from my experience of the film.

As well as the 4K UHD disc, which is just a pure joy to watch, is a Blu-Ray disc of the film and a third disc (also Blu-ray) with the special features. This has only added to my appreciation for the film, the lengths to which the crew of Interstellar went to to create it. The disc is chock full of features with conception of the story with Jonathan and Christopher Nolan, creating the score with Hans Zimmer, loads and loads and LOADS of stuff regarding effects, filming and the science backing up the film. Also included is a piece on Interstellar space and mankind's place in the universe and our potential for reaching other worlds, narrated by McConaughey. Christopher Nolan is no stranger in these features and he and several cast and crew discuss the undertaking of producing and directing the film.

One letdown (for me) has been the overall sound, although amazing in clarity and tone, which has been taken from the way it was played in theatres, meaning the music somewhat overwhelms while the actor's voices are more subdued. Fine if you live out in the middle of nowhere with no neighbours and want to experience it this way. But I found the volume on the remote control was getting a lot of use as I alternated between turning down the music and turning up the dialogue and back again.
Read more
22 people found this helpful
Report abuse

TeeBee
4.0 out of 5 stars I just wish I could understand the dialogue.
Reviewed in the United Kingdom on January 16, 2020
Verified Purchase
This is a good Sci-fi movie which in parts is rather unlikely. However, though I genuinely enjoy this film it would have been much more enjoyable had Mathew McConuaghey spoken his lines instead of using what I could only describe as a whispered drawl. In fact, to gain some understanding of what was going on when he was on-screen I had to use the undertitles, something which I dislike. There were also parts of the film which were a bit tongue in cheek, acceptably so, but the picturing of the black hole was incredible and also mathematically probable. All round, I am pleased with it and will watch it a number of times in the months/years to come.
Read more
11 people found this helpful
Report abuse

Z.
1.0 out of 5 stars Badly made.
Reviewed in the United Kingdom on August 29, 2019
Verified Purchase
Could not finish watching it. Both the cocky manner of the main character and the continuous music in the background irritated me. The latter is a big, big problem with new films. Why film makers think there has to be endless, monotone music in the background is beyond me.
Read more
12 people found this helpful
Report abuse