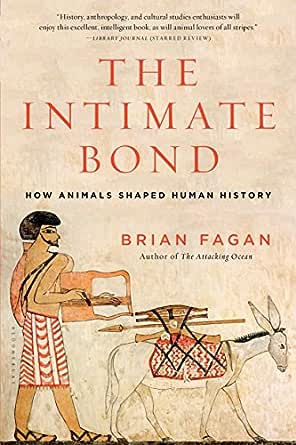 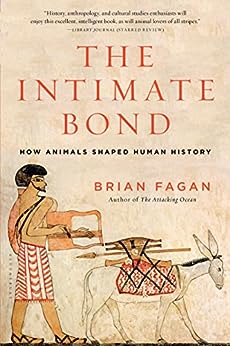 "Fagan (Emeritus, Anthropology/Univ. of California, Santa Barbara; The Attacking Ocean: The Past, Present, and Future of Rising Sea Levels, 2013, etc.) brings consummate skill to this frequently horrifying study of humanity's interaction with animals . . . His analysis, however, is sound, the product of an accomplished archaeological and anthropological background. Though reminding us of the cruelties still visited upon animals and insisting that we respect them anew--not merely as pets or idealized creatures of the wild--Fagan offers no resolutions to our conflicting attitudes toward them, but his compelling, cohesive book calls for further enlightenment." ―starred review, “Best Books of 2015”, Kirkus

"The result of Fagan’s exhaustive research is thought provoking and at times heartrending. The author skillfully traces the arc of human-animal relationships from ancient partners in survival to the master-servant dynamic we still see today despite the efforts of animal-rights activists . . . History, anthropology, and cultural studies enthusiasts will enjoy this excellent, intelligent book, as will animal lovers of all stripes." ―starred review, Library Journal

"In The Intimate Bond: How Animals Shaped Human History, Brian Fagan shares the fascinating stories of the most transformative of those relationships. Long before FedEx, it as the unassuming donkey that brought about globalization, delivering food, luxuries and commodities to a developing world--although overnight delivery was probably out of the question." ―Santa Barbara News Press

"Through stories spanning all of recorded history, anthropologist and popular-science writer Fagan skillfully recounts how many civilization-advancing innovations before the Industrial Revolution involved human management of animals." ―Booklist

Brian Fagan is the emeritus professor of anthropology at the University of California, Santa Barbara. He is the author of Beyond the Blue Horizon, Elixir, the Los Angeles Times bestseller Cro-Magnon, the New York Times bestseller The Great Warming, and The Attacking Ocean, among others. He has decades of experience at sea and is the author of several titles for sailors, including the widely praised The Cruising Guide to Central and Southern California. He lives in Santa Barbara, California. --This text refers to an out of print or unavailable edition of this title.

4.5 out of 5 stars
4.5 out of 5
17 customer ratings
How does Amazon calculate star ratings?
Amazon calculates a product’s star ratings based on a machine learned model instead of a raw data average. The model takes into account factors including the age of a rating, whether the ratings are from verified purchasers, and factors that establish reviewer trustworthiness.
Top Reviews

LastRanger
5.0 out of 5 stars The Beasts of Man:
Reviewed in the United States on June 6, 2016
Verified Purchase
For thousands of years man has shared his life with animals of one kind or another. Some were hunting companions while others were sources of food and clothing. Still others were mere slaves that carried him beyond the horizon, into battle or in search of home. How did this unusual relationship come about? Where and when did it start? In "The Intimate Bond" (2015) archeologist Brian Fagan explorers this ancient covenant between man and his beasts. As far as we know the dog was the first to be domesticated some tens of thousands of years ago. Our Hunter-Gatherer ancestors lived in close association with the animal world and certainly the wolf was probably quite common wherever humans lived. Like man. wolves live in extended family groups of various sizes. A large pack could number 10 to 20 members but smaller packs of 3 to 10 were not uncommon. If we kept close tabs on "our" local packs then it's a given that those wolves were also watching us. This could work to the advantage of both species and the more we cooperated with one another the closer this relationship became. No one knows when or where the wolf started actually living with humans but happen it did and neither species has ever looked back. The same chain of events could also apply to the horse resulting in an animal that was useful for carrying heavy loads, traveling long distances, chores around the home or farm. Another useful trait was riding, on the hunt, into battle and on long journeys. Then there was other farm-animals such as cattle, sheep, goats and pigs. Besides the horse we domesticated the closely related donkey and unrelated camel for transporting goods over long distances and even ride as the need arose. Each animal has its own story of domestication and Fagan goes into what we know, and don't know, about each one. Cats are also covered to a lesser degree with evidence from Egypt and the Far East. Brian Fagan is the popular author of many book on archeology, covering human civilizations, migrations and unique cultures. His writing is easy to follow, knowledgeable without being overly technical and is ever interesting. In "The Intimate Bond" we learn how we humans came to share our world with various animals and how we treat those animals for their service; with love, cruelty or indifference. Sometimes the bond is mutually beneficial and sometimes merely exploitive. But however we categorize it, it was necessary for our survival. I had no technical or downloading problems with this Kindle edition.

Kindle Cust.
4.0 out of 5 stars whether good or bad
Reviewed in the United States on July 4, 2015
Verified Purchase
I found the book to be thorough in its coverage of the different animals and how the animal contributed to society.
This is definitely a book you need to be able to sit down with so you can take your time and absorb all the information given. The author enables the reader to feel as if they are back in time and, whether good or bad, the relationship between man and our fellow creatures.
Read more
2 people found this helpful
Helpful
Comment Report abuse

tprin
5.0 out of 5 stars Great survey
Reviewed in the United States on May 4, 2015
Verified Purchase
Great coverage on most domestic animals though there could have been a bit more early coverage on cat's. Granted, not much is known for certain, but the more popular theories could have been touched upon. Loved the side bar topics. As a retired teacher, I try to stay up on new archaeological advances, but I had missed one of these when reading related literature.
Read more
3 people found this helpful
Helpful
Comment Report abuse

skivet
3.0 out of 5 stars Three Stars
Reviewed in the United States on June 17, 2015
Verified Purchase
Some historical with a lot of supposition thrown in.
Read more
3 people found this helpful
Helpful
Comment Report abuse

April L. Wendling
5.0 out of 5 stars Five Stars
Reviewed in the United States on May 26, 2015
Verified Purchase
Book came earlier than expected and was in excellent condition.
Read more
Helpful
Comment Report abuse

V. Williams
5.0 out of 5 stars Thank Heaven for Our Animals! Now Let's Take Care of Them!
Reviewed in the United States on April 14, 2015
The anthropomorphic trend towards our dogs and cats cannot only be explained but understood in this expose' of the bond between humans and our animals, but the book is overwhelmingly compelling in the explanation of how animals actually changed the course of human history. From brutal exploitation to absurd devotion, ions in the transformation. Author Brian Fagan capably provided proof of animals interchange with humans almost as soon as they began walking upright; "The Intimate Bond-How Animals Shaped Human History" is not just conjecture or theory.

This is the story of eight major animals who played a part in civilizing, spreading, and multiplying the human race: dog, goat, sheep, pig, cattle, donkey, horse, and camel. Was it actually the canine who lead the human into domesticating or living in mutual respect with these other creatures? It would certainly seem so! The partnership of four of these ranch animals changed the way humans lived--no longer mainly nomadic....the beginning of farming and the taming of the land as well? Arguably so.

But as we see, the partnership with these four-legged beasts also opened up the world to us--the earth and it's land bridges spread civilization farther over the globe. From the growing knowledge of the possibilities each animal possessed came human exploitation until the mere possession of certain of these stock were the manifestation of great wealth and power. Unfortunately, exploitation resulted in untold millions being literally worked to death having known nothing more than human bidding the extent of their existence in woeful conditions.

It shouldn't have--humans have the capacity of rational thought, emotion, intelligence, and speech--but did take millennia for humans in a social context to realize that animals also in a social context experienced many of the same emotions and certainly pain that their human counter-parts did. Only since the middle of the nineteenth century have concerted efforts been made to create laws meant to protect creatures entrusted in our care.

In a strongly worded summary, Fagan quotes others as his own sentiments in that our justification of the handling of these beasts is morally indefensible. In the U.S. there have been few gains in the treatment of certain animals raised for companionship or food. It's easier not to put a face on the package of meat. As Brian Fagan passionately pleads "This leaves us humans with the responsibility, with a wrenching dilemma that pits morality and altruism against ruthless exploitation and self-interest." Indeed--powerful stuff! I was fortunate enough to win this book on Goodreads. This was a pre-publication release and therefore still exhibit a few editing misses, but the powerful collection of the history and the animal's impact is formidable. We have the power--what are we going to do with it? Great book! Read it!
Read more
12 people found this helpful
Helpful
Comment Report abuse
See all reviews from the United States

Sunny
4.0 out of 5 stars Gift
Reviewed in the United Kingdom on September 10, 2015
Verified Purchase
I bought this as a gift, on the recommendation of a newspaper book review, so cannot comment on the content.
Read more
Helpful
Sending feedback...
Thank you for your feedback.
Sorry, we failed to record your vote. Please try again
Report abuse